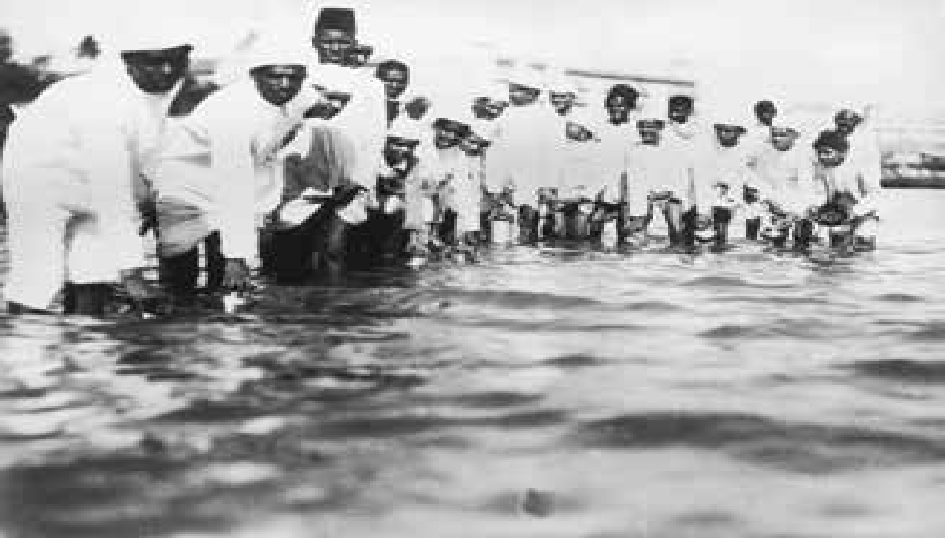 ‘Satyagraha’ was not originally coined by Gandhiji. Even before him, the Idea of Satyagraha was found in religious books, like the Upanishads, the Ramayana, the Mahabharata, the Gita, the Quran and many others. It was also practised by Indians as well as Westerners like Prahlad, Raja Harishchandra, Socrates, Plato, Jesus, King Ashoka and many others. Prahlad, the first individual Satyagrahi, offered Satyagraha against the tyranny of his cruel father. It was not known then that it was what Satyagraha meant. According to Gandhiji, “the principle called Satyagraha came into being before that name was invented. Indeed when it was born, I myself could not say what it was.” Some of the westerners believe that Gandhiji derived the idea of Satyagraha from Christ’s New Testament, specially the Sermon on the Mount. Some others believe that he got this idea from the writings of Tolstoy, though Tolstoy himself deduced it from the New Testament. In fact, Gandhi derived his idea of Satyagraha neither from Christ nor from Tolstoy, but from his own Vaishnavite faith.

The word ‘Satyagraha’ is Sanskrit in origin. It is a compound word formed of ‘Satya’, meaning ‘truth’ and ‘Agraha’, meaning ‘clinging, holding fast, adherence, insistence’. In other words, Satyagraha means clinging to truth, holding fast to truth, insistence on truth, or firm adherence to truth; come what may. Gandhiji described Satyagraha as “firmness in a good cause” in Indian opinion. In Young India, he pointed out that Satyagraha was just a new name for “the law of self-suffering”. And in Hind Swaraj, he proclaimed that “sacrifice of self is infinitely superior to sacrifice of others”, and that a self sufferer does not make others suffer for his mistakes. Satyagraha is a matchless weapon to fight against the strongest and the mightiest power. Gandhi used and demonstrated the power of Satyagraha successfully to get India liberated from the yoke of British imperialism. It was a bloodless revolution.

Satyagraha, which was Gandhi’s unique and supreme invention, discovery or creation, stands for a ceaseless and relentless pursuit of truth without resorting to hatred, rancour, ill-will or animosity. His concept does not imply passivity, weakness, helplessness or expediency. It is essentially an attitude of mind and a way of life based on the firm desire for vindicating just causes, correcting wrongs and converting among-doers by voluntary self-suffering and by patient and active use of the means which are non-violent and intrinsically just. In J.B. Kripalani’s words, “Satyagraha is strike plus something more. This something makes for better morals amongst those who carry on the fight. It also means greater loss of morals for the opponent. A Satyagrahi is better non-cooperator than a striker”. Infact, ‘Satyagraha’ is action-oriented search for and adherence to truth and a non-violent fight against untruth. What really made Gandhi famous all over the world was his experiment of Satyagraha which later on became the most effective method of fighting with any adversarial regime.

Satyagraha also implies an assertion of the power of the human soul against political and economic domination, because domination amounts to a denial of odder truth since it takes recourse to falsehood and manipulation for maintaining itself. Thus, Satyagraha is the vindication of the glory of the human conscience. The latter (conscience) reinforces the non-violent battle for the victory of truth. The farmers’ movement is the best example of it.

Satyagraha is utter self-effacement, greatest humiliation, greatest patience and brightest faith. It is its own reward. Satyagraha is a relentless search for truth and a determination to reach truth. It is a force that works silently and apparently slowly. In reality, there is no force in the world that is so direct or so swift in working. It implies the exercise of the purest soul-force against all injustice, oppression and exploitation. Literally, it means “truth pressure” and denotes the operation of the soul or spirit suffering, confidence, self-purification and trust are attributes of soul-force. Gandhi mentions the following as the basic assumptions for successful Satyagraha:

A. There must be common honesty among Satyagrahis. B. They must render heart discipline to their commander. There should be no mental reservation. C. They must be prepared to lose all, not merely their personal liberty, not merely their possessions, land, cash etc., but also the liberty and possessions of their families, and they must be ready cheerfully to face bullets,- bayonets, or even show death by torture. D. They must not be violent in thought, word or deed towards the ‘enemy’ or among themselves.

The Satyagrahi, whilst he is ever ready for fight, must be equally eager for peace. He must welcome any honourable opportunity for peace. My advice is Satyagraha first and Satyagraha last. There is no other or better road to freedom. In the code of a Satyagrahi, there is no such thing as surrender to brute force. Or the surrender then is the surrender of suffering and not to the Wielder of the bayonet. As a Satyagrahi, I must always allow my cards to be examined and re-examined at all times and make reparation if an error is discovered.

Satyagraha is, in fact, a growing science. Gandhi has demonstrated the efficiency and efficacy of Satyagraha not only in getting political freedom but against exploitation, oppression, social injustice and social evils in his life time. Satyagraha, moreover, is not the weapon of the weak or coward, rather it is a weapon of the strong or brave which demands for a new real civilization and culture for the humanity as a whole.

In fact, Satyagraha is the most powerful and permanent weapon to solve political, social and economic as well as religious problems. It holds good even today in our democratic setup against any perpetrated evil. Gandhi intregated the concept with his overall commitment to nonviolence, satyagraha and dignity of labour. Gandhi claimed that the Sarvodaya social order would be free from moral degradation, economic exploitation, and political subjugation. Recently, people have used satyahraha to fight against various governments across the world and successfully mobilised the masses and forced the Government to accept their just and humane demands.

In post independent India, Kisaan Satyagraha is unique, fundamental and most appropriate one to fight against government to repeal the three ‘Kala Kanun’ of Agriculture. It is most dangerous and anti-farmer. Farmers said that it is death warrant to farmers in years to come. It is a black spot in the history of farm laws. Farmers held Kisaan Satyagraha initially at Sidhu, Tikri and Gazipur Border. Now it has spread all over India and has become mass movement. More than two hundred innocent farmers, the son of the soil, sacrificed their life in this great movement. Farmers are requesting the government to repeal the three Black Laws. Several rounds of talk have already being held between government representatives and farmers’ organizations. Farmers are firm in their demands and ultimately government will have to bow down due to Kisaan Satyagraha. Gandhi used satyagraha as a weapon to blow the foundation of British Government. Similarly, my analysis is that in the long run it will shape the Indian politics and farmers will be victorious. They have already attracted the attention of world leaders and the support is coming from across the globe. Tractor rally, relay fasting, farmers’ mahapanchayat and Khap panchayat are boosting the morale of farmers to organise themselves for repealing the three Agricultural laws. Kisaan Satyagraha is giving voice to voiceless farmers. Farmers have already won half the battle by bringing all kinds of support from the people. Farmers have even started boycott of some products of Ambani and Adani. Congress President Sonia Gandhi ji has already come out in the support of farmers’ movement. Rahulji and Priyanka ji are moving around the country for peoples cause. Let us wait and watch.