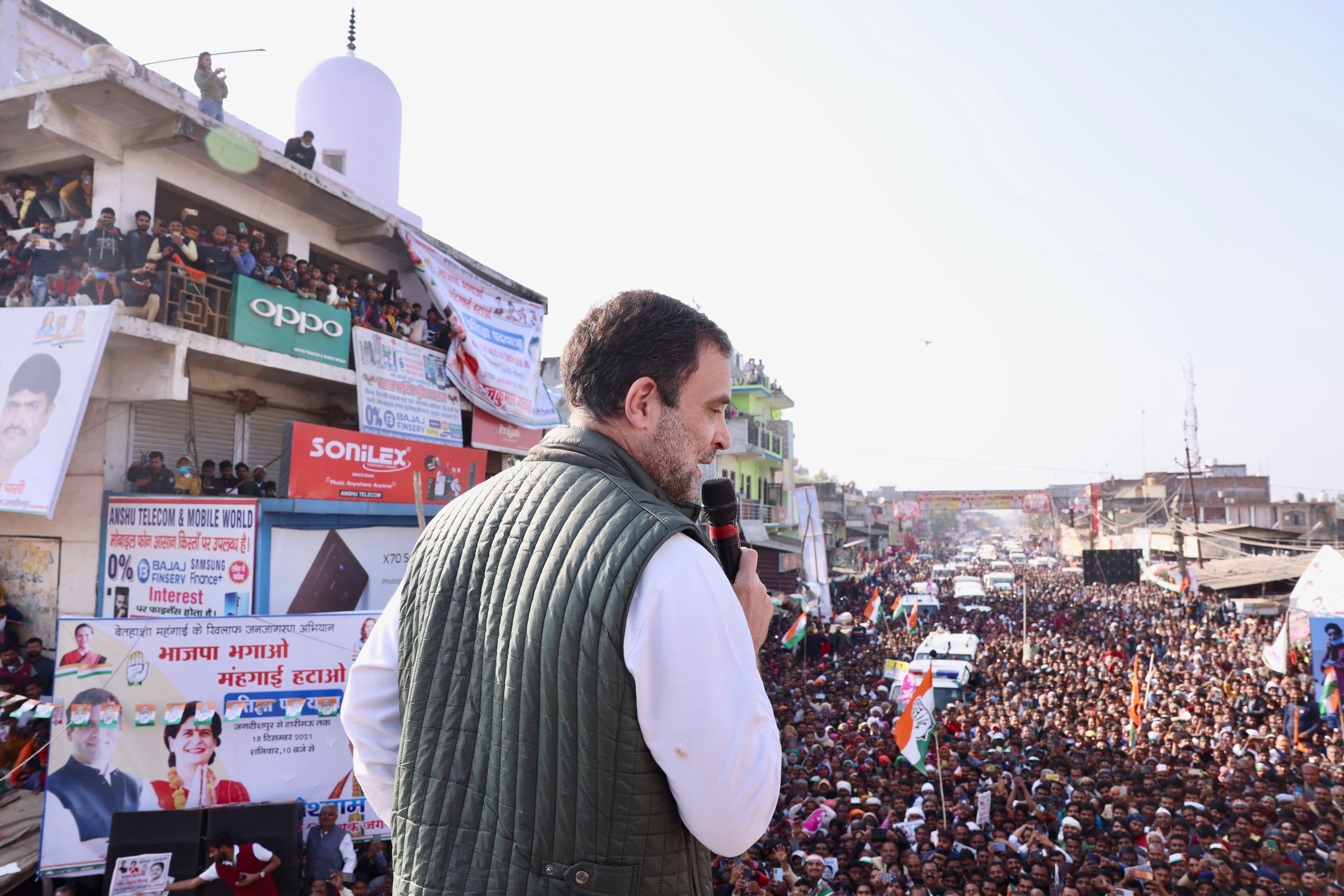 Amethi: Former Congress President Shri Rahul Gandhi undertook a padayatra in his former parliamentary constituency Amethi on December 18, 2021, as part of the ‘Jan Jagran Abhiyan’ against inflation and the ‘Gross Mismanagement’ of the economy by the BJP. AICC General Secretary and also the UP In-charge Smt. Priyanka Gandhi Vadra was by his side, as the Congress is strengthening its feet under her able leadership.

As Shri Rahul Gandhi visited Amethi for the second time since the 2019 Lok Sabha loss, he said, “Every lane in Amethi is still the same. Only that there’s anger against the government in people’s eyes. “

“In the hearts, there is space just like before. We are still united against injustice,” he added as he led the anti-inflation rally. “I came into politics in 2004. Amethi was the city where I contested my first election. People of Amethi have taught me a lot about politics. You have shown me the way to politics and I want to thank each and everyone.”

“Every lane in Amethi is the same. The only difference is that people’s eyes have anger against the government. Even today, we have the same place in people’s hearts… we are together against injustice,” Rahul tweeted after leading a march with Smt. Priyanka Gandhi Vadra from Jagdishpur to village Harimau in Amethi.

India’s border dispute with China, farmers’ deaths at protest sites, and “Hindu vs Hindutvawadi” jibe at the BJP figured in his speech.

“A Hindu spends his whole life walking on the path of truth. A Hindu never succumbs to his fear - he faces all his fears. He never lets his fear turn into anger, hatred. But a Hindutvawadi only uses lies to stay in power. Mahatma Gandhi ji said a Hindu’s path is that of satyagraha,” said Shri Rahul Gandhi.

The six-kilometre foot march in Amethi comes exactly a week after top Congress leaders - including Congress President Smt. Sonia Gandhi - held a rally in Rajasthan to highlight, what they called, Centre’s failures. Shri Rahul Gandhi had lashed out at the BJP with the “Hindu vs Hindutvawadi” jibe in Rajasthan too.

Targeting the BJP government in the State and the Centre, Shri Rahul Gandhi, stepping up the attack said, “You can see the condition today. The country is facing two questions – unemployment and price rise. Neither does the Prime Minister answer these questions, nor does the Chief Minister… You must have seen the PM bathing in the Ganga (river) alone. But the PM can’t tell the country why jobs are not being created in the country… why prices are going up,” he said, referring to PM Modi’s visit to Varanasi earlier this week.”PM Modi was taking a dip in Ganga a few days back but won’t talk about unemployment.”

Rahul reiterated his “Hindu versus Hindutvawadi” jibe at Prime Minister Modi. “On one side is Hindu. On the other is Hindutvawadi. On one side is truth, love and non-violence and on the other is falsehood, hatred and violence. Hindutvawadi bathes alone in Ganga, but a Hindu will bathe with crores of others.” “But when did he protect the truth? He asked people to bang thalis to get rid of COVID...Hindu or Hindutvawadi?” Rahul said holding a public gathering in Harimau. “First, he (PM Modi) said that the three farm laws are for the benefit of farmers. Then farmers protested in all states. One year later, he says that he made a mistake and withdrew the laws. We asked in Parliament that 700 farmers were martyred in the protests and whether the families were given compensation or not. We got an answer that not a single farmer died and that they don’t know anything.” Rahul alleged.

Shri Rahul Gandhi was referring to Union Agriculture Minister Narendra Singh Tomar’s statement to Parliament this month that the government had “no record” of farmers who died during their agitation against the laws. The minister was responding to a question on proposed compensation for those who lost their lives during the stir.

His attack comes at a time when the Central Government has moved to repeal the three farm laws, which brought thousands of farmers — largely from Punjab, Haryana and Uttar Pradesh — to protest at Delhi’s borders in late 2020. Last month, PM Modi said in a surprise announcement that the laws will be withdrawn and offered an apology for not being able to convince a section of farmers about the benefits of the legislations. On November 29, the bill to repeal the laws was passed in Parliament.

“Middle-class people and the poor people were badly affected by some of the decisions taken by the PM, which also resulted in large-scale unemployment. Demonetisation, GST, no help during the Covid crisis are the major reasons for unemployment in India,” he said.

He also criticized Prime Minister Modi over the India-China border standoff, alleging there was inaction by the Central Government. “Today, the Chinese Army is sitting inside our borders. They have taken land as big as Delhi and made it their own. Our PM didn’t say anything about it and didn’t do anything too,” Shri Rahul Gandhi said.

AICC General Secretary Smt. Priyanka Gandhi Vadra too tweeted, “There is an old relationship with Amethi – one of love and truth. It is not of politics, but of emotions. Thank you Amethi for the love and for raising your voice against BJP’s bad policies.”