It is our responsibility to save the country from such dictatorship and fight it: Smt. Sonia Gandhi 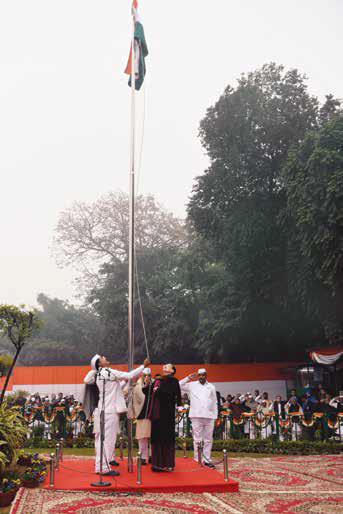 NEW DELHI: Indian National Congress celebrated its 136th Foundation Day on 28th December, 2020, at the Party Headquarters in New Delhi. Due to Covid protocols, the function was organised in a limited manner. The function was attended by the members of the Congress Working Committee, Office Bearers and others. Smt. Priyanka Gandhi Vadra also attended the function.

Addressing party workers in a video message on the 136th foundation day of the party, Smt. Sonia Gandhi urged party leaders and workers to unite in ‘Fighting dictatorship’ and protecting the country’s Democracy, Constitution and the countrymen. She also said that the country is going through difficult times, similar to those prevailing before independence.

Smt. Sonia Gandhi said that “Today, Congress has completed 135 years of its inception. Right from the starting of the Freedom struggle till now, we have strived for values like patriotism, fearlessness, selflessness, sense of public service, brotherhood, unity and integrity. During the struggle for independence which started as a mass movement, Congress meandered through many a junctures where the Congress workers and leaders were persecuted, but the Congressmen did not back down from their goal of serving their nation and securing freedom for the masses and for India. They went to Kaalapani, bore lathi-charges, sacrificed their lives braving all the bullets, fought for freedom and so the country gained independence.

Even after independence, the Congress laid the foundation for a strong India working along with the people of the country. Even today, the rights of the people are being trampled upon as had been done before independence. There is an atmosphere of dictatorship all around, democratic and constitutional institutions are being abolished, unemployment is at its peak, farms are being attacked and black laws are being imposed on the Annadatas (farmers) of the country. In such a situation, it is our responsibility to save the country once again from the dictatorial forces and encounter them bravely. This is true patriotism.

Today, we will have to unite for safeguarding the honor of the same tricolor which had been our driving force for gaining independence. The Congress will have to be strengthened on every front. This tricolor and the Congress represent the spirit of the people of the country, symbolize people’s hopes and are pride of the nation. Keeping this in mind, we will have to move forward to win the hearts of common men. Today, on the foundation day of the Congress, let us vow to fight till the last breath for the Constitution, Democracy and the people of the country. Jai Hind!”