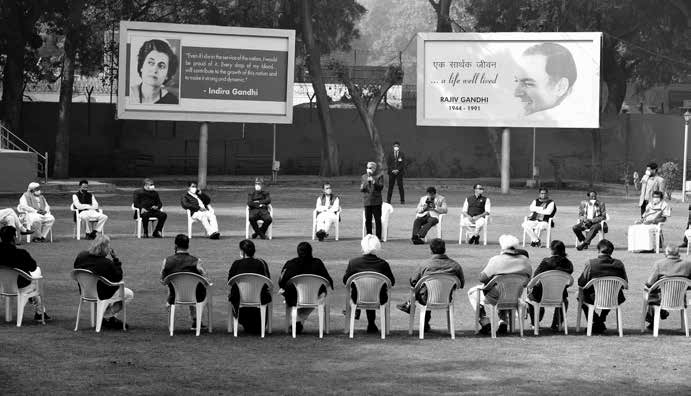 New Delhi: Congress leader Shri Rahul Gandhi hit out at the Centre and said there is no democracy in India after he met President Kovind on 24th December, 2020, while Smt. Priyanka Gandhi Vadra and other Congress leaders were detained on their way to meet the President.

In the most undemocratic, unfortunate, high handed and brazen manner on 24th December, 2020, the Delhi Police under the instruction of Home Minister Shri Amit Shah and the PM Shri Narendra Modi, detained and arrested senior Congress leaders including Working Committee Members and MPs.

This happened when the delegation, led by Shri Rahul Gandhi and leaders of the party in Rajya Sabha & Lok Sabha Shri Ghulam Nabi Azad and Shri Adhir Chowdhury, was to meet Hon’ble President of India and handover around 2 crore signatures from farmers, farm labourers and manual labourers urging the intervention of the President to ensure the repeal of the anti-farmer, anti-people laws.

Even as the leaders gathered at the AICC Headquarters peacefully, barring the three leaders who would have proceeded to Rashtrapati Bhawan, all senior leaders and party functionaries including Priyanka Gandhi Vadra, were detained and taken in police custody.

“It is an assault on the idea of India. The government is stopping our MPs from moving out of our office...There is no democracy in India, it is only in imagination, not in reality,” said Rahul Gandhi, after coming out of the meeting.

Congress’ march to Rashtrapati Bhavan was stopped by police. Rahul Gandhi proceeded to the Rashtrapati Bhawan to meet President Ram Nath Kovind with the signatures against farm laws and said the farmers will not budge from Delhi borders till the farm laws are repealed.

Coming out after meeting President Kovind, Rahul Gandhi said, “The Opposition stands with farmers. The protesting farmers will not stop the protest till the laws are repealed.” He also said there is no democracy in India.

As the march was stopped, Priyanka Gandhi Vadra said, “Any dissent against this government is classified as having elements of terror. We are undertaking this march to voice our support for the farmers.”

Priyanka Gandhi Vadra also said, “We’re living in a democracy and they are elected MPs. They have the right to meet the President and they should be allowed. What is the problem with that? Government is not ready to listen to voices of lakhs of farmers camping at borders.”

After the meeting with the President, Shri Rahul Gandhi said, “I want to tell PM Modi that farmers will not go back home if there’s no repeal of the farm laws. The Centre should call a joint session of Parliament and repeal the laws. All opposition parties are with the farmers.”

Earlier, Chanakyapuri ACP Pragya had said, “Only the leaders who have permission will be allowed to go to Rashtrapati Bhavan.”

Priyanka Gandhi Vadra and other Congress leaders were detained and taken on a bus by police as they did not have permission for the protest march in Delhi.

Shri Rahul Gandhi insisted on convening a joint session of parliament and repealing the anti-farmer legislations.

They all were later released.