Recognise, question those not working for you: Priyanka in Assam 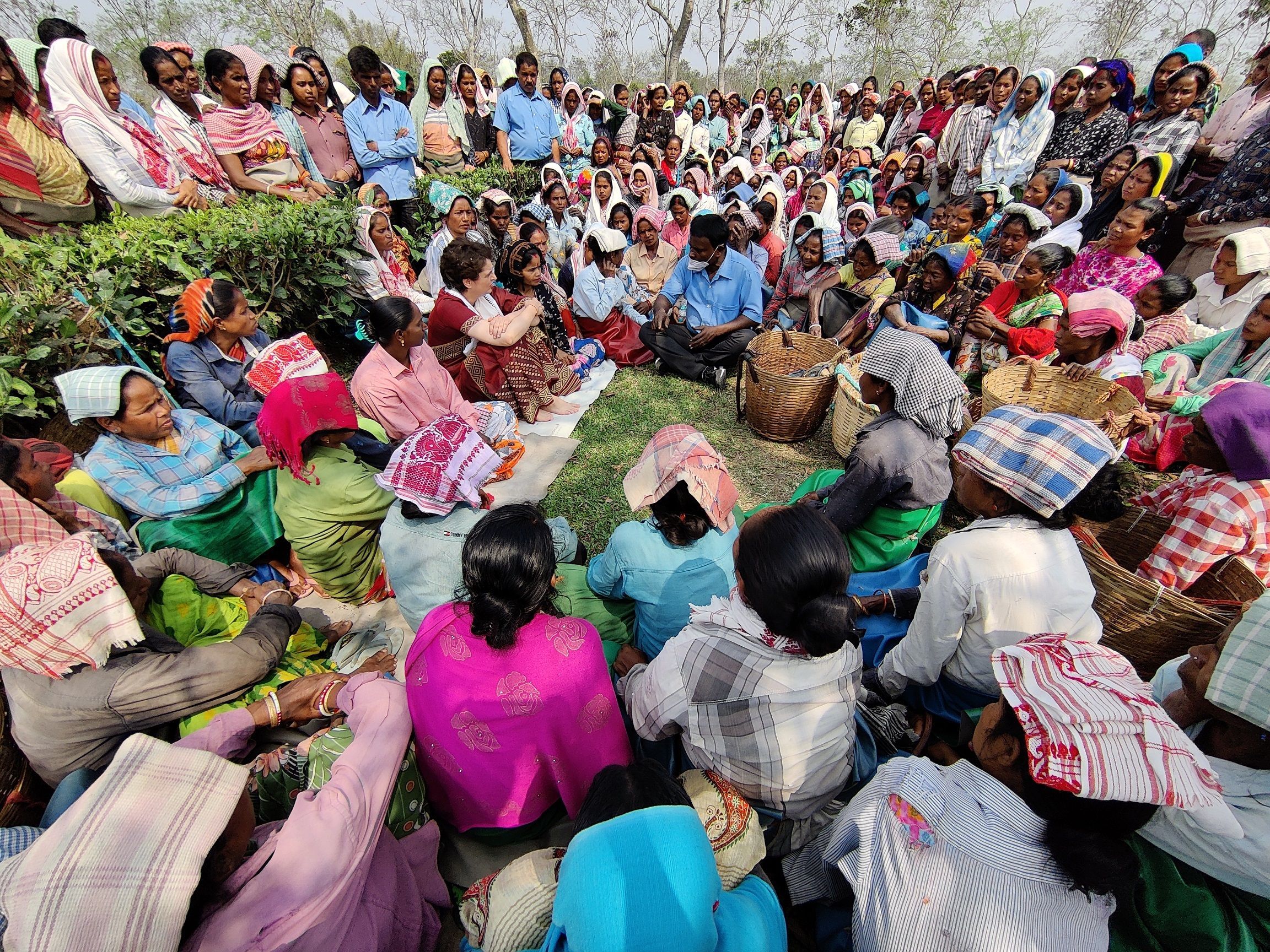 Guwahati: AICC General Secretary Smt. Priyanka Gandhi Vadra arrived in the poll-bound state on a two-day visit, her first this year, earlier in the day (1st March, 2021) and took part in several programmes.

Smt. Priyanka Gandhi Vadra on 1st March, 2021, urged voters in Assam to recognise and question those elected representatives and ministers who are not working to protect their interests.

“You need to recognise your leaders and those politicians who come and stand before you during elections and make promises. If you don’t recognise their truth, you won’t be able to change your future for the better,” she said while addressing party workers at Lakhimpur in Upper Assam.

Smt. Gandhi was launching the party’s statewide campaign against rising unemployment and the alleged failure of the ruling BJP government to fulfil its promise made in 2016 of creating jobs on a mass scale.

“Those who came to you in the last election and promised to give 2.5 million jobs weren’t able to give even 80,000. You need to recognise them. You also need to recognise those who travel across the state on chartered planes at all times and come to you riding bicycles during election,” she said.

“You need to know where your welfare lies. Assam has lot of potential. You can send your products all over the country. But the opposite is happening. Products like gamcha (traditional scarf-towel) are coming from outside. Even fish is being imported from Andhra Pradesh. Why is it happening?” She asked.

She urged people to ask these questions to those in power. Smt. Priyanka Gandhi urged them to also question why Assam’s industries, tea-gardens and oil fields are being handed over to outsiders.

“The people running the Assam government and the government in Centre are not worried about your good. They don’t want to give recognition to your culture or strengthen it. Till they don’t understand you well, your future is not secure,” she said.

The Congress leader blamed the BJP-led state government and Centre for unemployment and inflation. “Your future and the future of your state and nation are in your hands. You need to understand this responsibility well and take control of your future. The state government didn’t do anything for you in five years,” she said.

She accused leaders in Delhi of not visiting Assam when the floods took place or when people were in trouble due to the Covid-19 lockdown.

“But the same people visit you five-six times before election. The truth is before you. You need to choose between those who make tall claims but are not able to fulfil them, and those who have worked, set up industries, created jobs, waived loans and were with you during floods,” she said.

“Please cast your vote carefully. This vote is not for a party. It is for Assam, your existence and to save your culture. Especially my young brothers and sisters, this vote is to protect your future. In order to do that, please vote for Congress and those who are part of our ‘mahajut’ (grand alliance),” Smt. Priyanka Gandhi added.

Assam will witness a three-phased election with commencement of voting on March 27, followed by April 1 and April 6. The Congress has already stitched up a pre-poll alliance with BPF, AIUDF, three Left parties and a newly formed regional outfit.

Lakhimpur: Congress General Secretary Smt. Priyanka Gandhi Vadra claimed that BJP leaders talk about implementing the  Citizenship Amendment Act (CAA) in various parts of the country, but lack the courage to mention it in Assam.

The state witnessed violent protests against the CAA in 2019 and five persons lost their lives. The protestors saw the law as a threat to their cultural identity and livelihood. She was clad in a handwoven traditional Assamese ‘mekhla chador’, with designs typical of its Mising tribe.

“The BJP makes tall promises before elections but during the next five years, they do nothing to fulfil them and people have realised it,” the Congress leader told reporters after addressing a meeting of party workers at Lakhimpur.

BJP leaders move around the country talking about implementing the CAA but they are silent about it when they come to Assam, Gandhi said.

”They lack the courage to mention it in the state and people of Assam should never allow them to even talk about it, let alone implement it,” she said.

The objective of the CAA is to grant Indian citizenship to people of minority communities Hindu, Sikh, Jain, Buddhist, Parsi and Christian of Pakistan, Bangladesh and Afghanistan, who had come to India till December 31, 2014, due to religious persecution in these countries.

Beginning and ending her speech with “Joi AaiAsom” (Hail, Mother Assam), the Congress leader said, “You are not fighting for the party or your seat but Assam’s identity and your motherland”.

“Prime Minister Narendra Modi came to the state and spoke about ‘Assam tea being attacked’ but what about the identity of the state that is under attack due to the policies of his government”, she said.

“If he really wanted to save Assam tea, why did he not increase employment opportunities for them or enhance their minimum daily wages as promised before the election?” the Congress leader said.

”Union Home Minister Amit Shah had promised that Clause 6 of the Assam Accord would be implemented to safeguard the indigenous population but it was not done”, said Smt. Gandhi.

As per Clause 6 of the Assam Accord, Constitutional, legislative and administrative safeguards, as may be appropriate, shall be provided to protect, preserve and promote the culture, social, linguistic identity and heritage of the Assamese people.

The bone of contention since the signing of the Accord in 1985 has been the definition of the Assamese people.

“When the Assam Accord was signed, I was just 14 years old and heard my father (Rajiv Gandhi) talking to somebody on the phone (about it). Later, he told me that elections would be held in Assam and though the Congress would lose, he wanted what is the best for the people of the state,” she said.

A six-year agitation demanding identification and deportation of illegal immigrants was launched by the All Assam Students Union (AASU) in 1979. It had culminated with the signing of the Assam Accord on August 15, 1985, in the presence of the then Prime Minister Rajiv Gandhi.

Earlier, soon after landing at Lokapriya Gopinath Bordoloi international airport in Guwahati, she visited the Kamakhya Temple, the sacred ‘shakti-peeth’ dedicated to Goddess Kamakhya located on Nilachal Hill in the city.

“I had been thinking of visiting Kamakhya Temple for long and it was fulfilled today. I prayed to the goddess and sought her blessings for my family. I also prayed for the welfare of Assam and people of the state,” Smt. Gandhi told journalists at the temple.

She interacted with tea garden workers in Biswanath district. She visited LetekuPukhuri, the birthplace of Madhavdeb, the 16th century Vaishnavite preacher and chief disciple of SrimantaSankardev.

A large number of people greeted her at the venues she visited. Smt. Priyanka Gandhi also danced ‘jhumur’ and ‘bihu’ at two places along with local dancers. From the Lilabari Airport in Lakhimpur, she travelled to various venues in a bus used in the Congress’ ‘Save Assam’ poll campaign.

Tezpur: Congress leader Smt. Priyanka Gandhi Vadra, who is on the second and last day of her visit to poll-bound Assam, launched an attack on Prime Minister Narendra Modi over several issues, including the Citizenship Amendment Act (CAA) and floods in the northeastern state. “The BJP has hurt the Assamese people and their identity. They had said before the previous elections that they will not implement the CAA… We will bring a law which will make sure that CAA can not be implemented in this state,” She said during a rally in Tezpur.

She also said that Assam’s leaders of the ruling party are drinking ‘Japanese green tea’ and the people of the state may have to remind them where they belong by offering them homemade ‘kadak’ Assamese tea.

She also took a jibe at Assam CM SarabanandaSonowal and Deputy CM HimantaBiswaSarma saying that the state needs only one Chief Minister.

The Congress party, she said, will ensure four other things for the people of Assam. “Two hundred units of electricity will be free of charge for all of you. Homemakers will be given 2000 under the ‘GrihiniSamman Scheme’. Tea garden workers will receive 365 per day as wages. Lastly, we will ensure that we will generate 500,000 jobs,” she said.

Earlier, She visited Sadharu tea estate in neighbouring Biswanath district. She mingled with women tea leaf pluckers, sat on the ground with them, wore their dress, plucked tea leaves and even had two cups of tea sitting on the ground inside the tea garden. She visited a tea garden worker’s home and had her evening tea with them.