Go to the masses with a vision’: Rahul Gandhi tells Gujarat Congress leaders 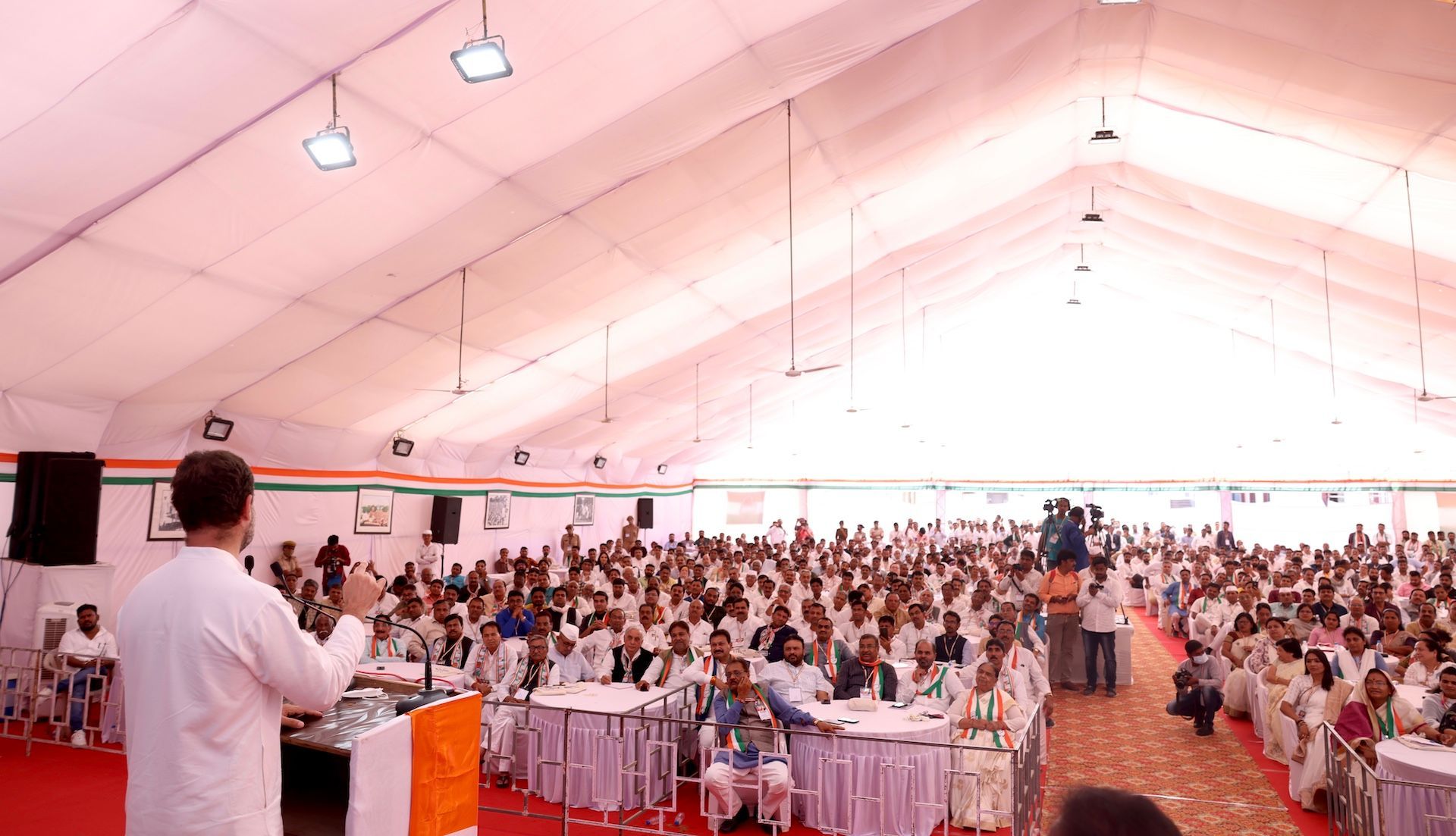 Dwarka (Gujarat): Giving a roadmap to his party for winning the upcoming Assembly elections in Gujarat, Congress leader Shri Rahul Gandhi on February 26, 2022, asked leaders of the Party’s state unit to come up with a vision for Gujarat and project 25 people who would transform that vision into reality. Addressing the Chintan Shibir, a three-day conclave of party workers organised by Gujarat Pradesh Congress Committee (GPCC) in Dwarka, Shri Rahul Gandhi said that people of Gujarat were fed up with the 25-year-long rule of BJP as, he claimed, BJP’s politics was harming Gujarat.

“People of Gujarat are looking up to you. You are thinking that you are fed up with the BJP but the BJP has harmed people of Gujarat 10 times more as compared to harm it has caused to you. Did anyone slit any Congress worker’s throat? No.

But more than three lakh people died here due to Covid. They were people of Gujarat. They say it’s Gujarat model, but in this model, there were no oxygen cylinders, ventilators. I myself saw people dying in vehicles in front of hospital,” the former Congress President said while addressing the Shibir.

Shri Rahul also asked GPCC President Shri Jagdish Thakor and Shri Raghu Sharma, the AICC in-charge for Gujarat, to identify 25 people from ranks and file of the party to lead the party’s charge in the Assembly election in Gujarat due to be held in December this year and advised to throw entire weight of the party behind them.

“To change Congress party, to create a storm here, we need 25 to 30 people. We don’t need 100, 200, 500 or 1000 people. If 25 of you resolve that you want to uproot BJP, 25, even five people are enough. If those five get five each, the job will be done,” Shri Gandhi said, adding, “In Congress party, there is disconnect between those who speak and those who do actual work.” He also asked the state unit to present an alternate vision for the state.

“If you could show people your vision for Gujarat, communicate to them as to how you want to change the state, what you are going to do for tribals, small and medium businesses, for diamond industry, colleges and university while simultaneously propping up those 25 faces, this is your election,” Shri Rahul Gandhi said.

“What did Narendra Modi do to small and medium businesses? (He) destroyed them. GST, demonetization and his actions during the Covid-19 pandemic, broke the backbone of Gujarat. And Gujarat understands this,” Shri Rahul Gandhi said.

He assessed that this scenario represents an opportunity but Congress needs to clear confusion from minds of people.

“When I am telling you that there is a huge opportunity here, then what is the problem. There is BJP on the one side and Congress on the other. But problem lies in the fact that when people of Gujarat look at Congress, they can’t figure out what Congress wants to do and how and as to who are the people who would do it. They look at us and say that they want to make Congress victorious,” Shri Rahul Gandhi said, adding, “But the media is on their (BJP’s) side, they keep talking about them (BJP) while talking ill of us round the clock. Therefore, there is some confusion. We need to clear this confusion by outlining as to what Congress wants to do, how it proposes to go about it and who are the people who will do it.”

Before addressing the conclave, Congress leader Shri Rahul Gandhi went to Jagat Mandir, the famous temple dedicated to Lord Krishna and performed the ritual to hoist the holy flag atop the temple. While addressing party workers and leaders at the Conclave, Rahul Ji framed the upcoming election in terms of the battle of Mahabharata.

“When the war began and Lord Krishna was lying there, he cleverly asked (Arjuna and Duryodhana) if they wanted the army or Krishna. This is not a common question but a deep one. He was asking if you wanted to fight for sachchai (Truth) or juth (lie). You decided it. If you want to fight the war for sachchai, you need four-five people. And if you want to fight for juth, then you take everything away 100 brothers, weapons, they were not there but it could be anything helicopters, planes, CBI, ED media, police, goons, new clothes every day,” said he, while terming Congress turncoats as Kauravas.

He said that he understands that the morale of Congress workers in Gujarat is down due to fighting the BJP without success for 25 years, but exhorted them to draw strength from Nelson Mandela’s struggle against the apartheid regime in South Africa.

He also asked people to draw strength from Mahatma Gandhi’s struggle. “So Gujarat teaches us this that even if there is (political) power, CBI, ED, Kauravas, it doesn’t matter. This is all maya (illusion) and on the other hand, there’s truth. (Pointing to a photo of Mahatma Gandhi), Look at him! Did he have CBI, ED, media, good clothes? Sachchhai (the truth) looks like that. Sachchai is always very simple,” He further said.

Former Congress President said that he loved people of Gujarat and the food of Gujarat. “I am just a call away,” he said.

Former GPCC President Amit Chavda suggested that Congress should move-away from personality-oriented style of functioning to office-bearer-centered organisation to change fortunes of the party. “It has been a common refrain that those who work in the party organisation don’t get due respect and instead, elected leaders get more importance. Probably, this is the reason we are witnessing a low tide in enthusiasm among those who work in the party’s organization,” Chavda said, during the party’s Chintan Shibir.