“I am a Hindu but not a Hindutvavadi” 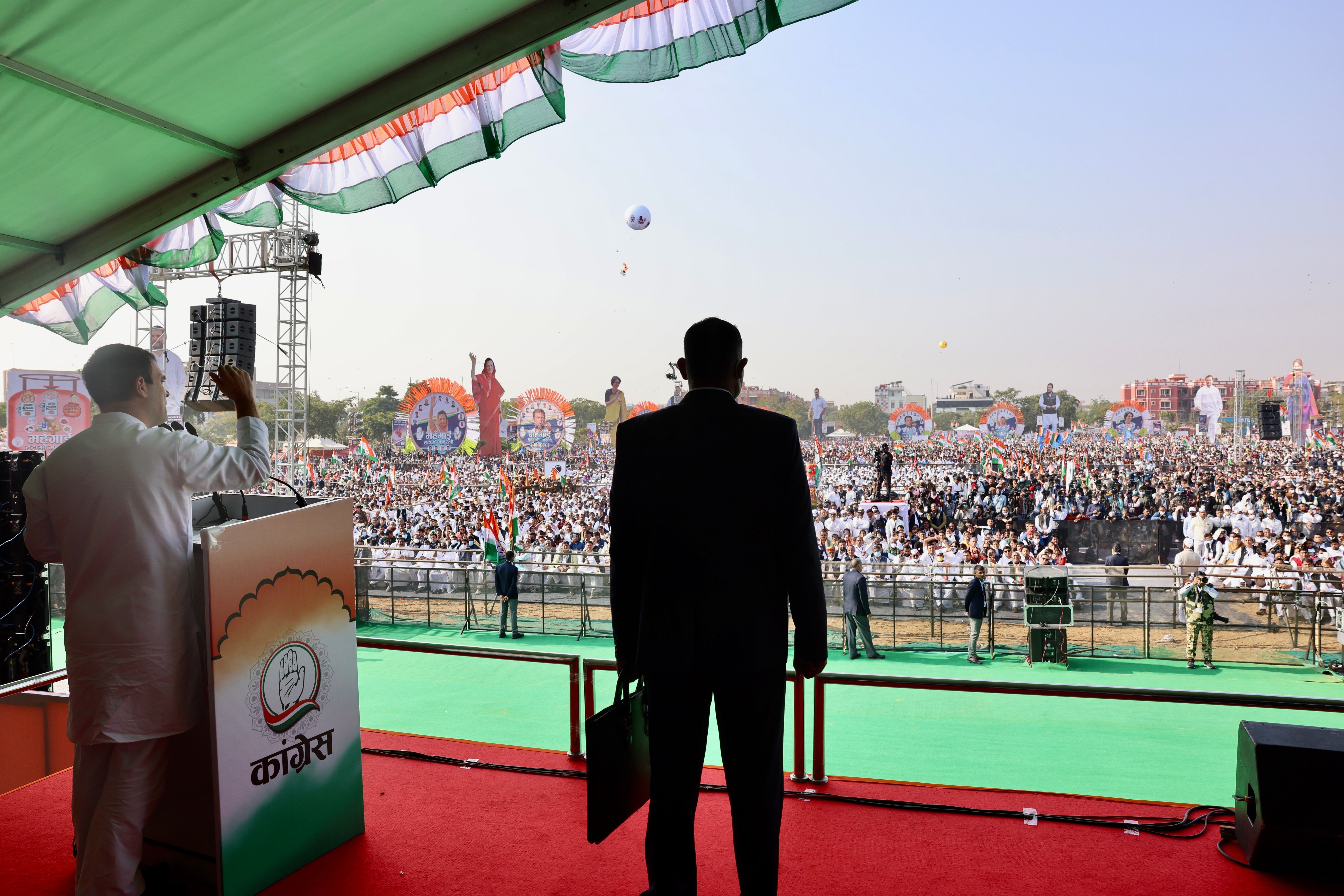 You are all being witness to the condition in the country. The rally is about inflation, about unemployment, about what is causing pain, suffering to the general public. The condition of the country today is unprecedented. There is concentration of money in the hands of only 4-5 capitalists. All the sub-institutions of India are in the grip of only one organization. RSS’ OSD in the minister’s office. People are not running the country. Only 3-4 capitalists are running the country and our Prime Minister Ji is getting their work done.

Demonetization happened, GST was implemented, three black laws were made and at the time of Corona you saw the condition of the people and the country. But before speaking of these things, I want to tell you another thing today. Who is the country fighting with and who are the parties to this fight, among which ideologies is this fight going on? I want to tell you this in 5 minutes and then after that I will openly speak to you about inflation, black laws, unemployment.

You know that no two individuals can have one soul. Can two people have one soul; The public responded with a No. Similarly, two words cannot have the same meaning. Two living entities cannot have one soul, two words cannot have the same meaning. Every word has a different meaning. In the politics of the country today, there is a collision of two words, two different words, their meanings are different. One word is ‘Hindu,’ and the other word is ‘Hindutvavadi’. They are not the same thing. These are two different words and have completely different meanings. I am a Hindu but not a Hindutvavadi. All of them are Hindus (pointing to the huge crowd), but not Hindutvavadi, but today I want to tell you the difference between the word ‘Hindu’ and the word ‘Hindutvavadi.’

Brothers and sisters, Mahatma Gandhi was a Hindu. Am I right? Mahatma Gandhi- a Hindu. Godse – a Hindutvavadi. What’s the difference? I’ll tell you the difference. A Hindu seeks the truth, no matter what come may. He would die or even get crushed but a Hindu would always search for truth. He follows the path of Satyagraha. He spends his whole life in search of truth. Mahatma Gandhi wrote his Autobiography – ‘My Experiments with Truth’ means, he spent his whole life understanding the truth, to find the truth and finally a Hindutvavadi shot him three times straight in the chest.

Brothers and sisters, a Hindutvavadi on the other hand spends his whole life in search of power. He has nothing to do with truth, he only wants power and will do anything for getting that power. A Hindutvavadi would kill anyone, would say anything, would even resort to all sorts of malice but he needs power. His path is not Satyagraha, his way is ‘Sattagraha’.

It is written in Gita - Fight for the truth, no matter even if you die in the process but fight for the truth. In the Gita, Krishna did not ask Arjuna to kill his brothers for power. Krishna asked Arjuna to kill his brothers for the sake of truth. Brothers and sisters, this fight is going on in India today. These are false Hinduson the one hand- the Hindutvavadis and on the other hand are true Hindus i.e. Hindus that love, Hindus that follow brotherhood, Hindus who respect all religions.

Brothers and sisters, before the arrival of Narendra Modi, the unorganized sector of India - small shopkeepers, poor people, small companies, cottage industries, who used to make incense sticks, slippers, shoes, who sewed clothes, farmers who were not organized - their share in India’s economy used to be 52 percent. After demonetization, GST, black laws and corona, the share of unorganized sector has come down to a mere 20 percent.

Brothers and sisters, 90 percent of India’s profit, corporate profit of India goes to 20 companies. These TVs that you can see here (pointing to the LCD TV installed in the rally), these who will show it for 5 minutes in this rally are their slaves. Brothers and sisters, they are not Hindutvavadis. They are Hindus, but they have been suppressed. Hindutvavadis have suppressed these poor people. But Hindus cannot be suppressed, can never be suppressed. It could never happen in 3000 years and cannot happen even today. Because we are not afraid. We are not afraid of anyone. We are not afraid of dying. So, Narendra Modi ji and his 3-4 industrialists, Hindutvavadis have ruined this country in 7 years, have almost finished it in last 7 years.

The farmer who used to earn money earlier. We did the loan waiver for them. We understood that the farmer needed help. We waived off loans. The Chief Minister of Chhattisgarh is sitting, Kamal Nath ji is sitting, we have done loan waiver in every state because we know that farmer is the backbone of this country and nothing can happen without him. Narendra Modi ji has stabbed the farmers’ soul, their heart, their chest and brothers and sisters, that too not from the front, but from behind their backs. Why? Because he is a Hindutvavadi. Even if a Hindu has to stab someone, he strikes from the front, not from behind. But just remember that a Hindutvavadi will always stab you from behind. Brothers and sisters, he stabbed from behind and then asked Hindus to wake up. When the farmers stood against the Hindutvavadi, the Hindutvavadi simply apologized.

Brothers and sisters, 700 farmers were martyred. Here, we observed silence for two minutes, but it was not allowed inside the Parliament. I said, “If you don’t want to then let me stand up.” The people of the opposition stood in silence for two minutes but the government did not do so. If you ask Channi ji, the Punjab government has given Rs. 5 lakhs to the families of 400 martyr farmers and 152 of them have also got jobs and we are going to give jobs to the rest. The Government of India says in the Parliament, “We do not know which farmers died, we do not have a list. No farmer was martyred. We are not entitled to pay any compensation.” I took the list from Punjab, 70-80 more names from Haryana. I presented names of 500 people in the Parliament, I placed the list in the Parliament and said, “See, the Punjab government has given compensation, you should also give compensation.” He stabbed from behind and then apologized and when it came to giving compensation of Rs. 5 lakhs, Rs. 10 lakhs or Rs. 25 lakhs, Narendra Modi ji could not give because he says that those farmers were not even martyred. So, this is the thinking of Hindutvavadis. Chinese army entered Indian territory, encroached upon thousands of kilometers but the Prime Minister will say that no one has come inside the country and then Defense Ministry will nullify this claim by saying that China has come inside our country. Chinese army is inside our country.

First thing he says upon waking up in the morning is what to give to Adani – Ambani. Let’s give the airport today, let’s give farmers’ land today. Let’s give them mining today. A country is not run in this way. The country belongs to the poor, to the farmers, to the laborers, to the small shopkeepers, to the small medium business people. Why? Because these people can give employment to this country. Ambani ji and Adani ji hold a special place undoubtedly, but they cannot create employment. Employment is generated by our farmer. Employment is created by small traders. The small shopkeeper generates employment. They have destroyed, wiped out those with small business, mid-size business. Brothers and sisters, 1 percent of the population has 33 percent wealth, 10 percent of the population has 65 percent wealth and 50 percent of the population has only 6 percent wealth! What is happening!

India will have to stand against this invasion and there is no other way and you see that this country will stand united. Rajasthan will stand united and show the way out to Narendra Modi ji.

Corona happened. I am a witness myself that the rest of the countries helped by putting money in the pockets of their people, but Narendra Modi waived the tax of 5-10 big industrialists, put money in their pockets and did not even provide a train to the laborers. They walked thousands of kilometers. 100-200 people died on the way itself. Narendra Modi Ji had said - Beat the plates, clap, set the mobile phone’s lights on, die.

They talk about employment, but today India has the highest unemployment in 60 years. Why, because you have broken the backbone of employment. You did demonetization, you brought GST, you did not support small businesses during corona. Everything got over. How will employment be generated? Two or three industrialists cannot generate employment. Employment is generated by lakhs of shopkeepers, lakhs of small business owners, crores of farmers with medium size businesses. This is the truth of the country. Brothers and sisters, the country will have to recognize this truth, there is no other way. I am not going to lie to you. I am not a Hindutvavadi. I am a Hindu. I am not afraid, no matter whether I get power or not, I am not going to deviate from the path of truth. But the country has to recognize the truth.

You came from afar. You listened to me with so much love. I felt elated.

You are the power of the Congress party. You are the truth of this country. You fight for the country. Don’t be afraid. There is no need to be afraid.

Heartfelt thanks to all of you. Jai Hind.