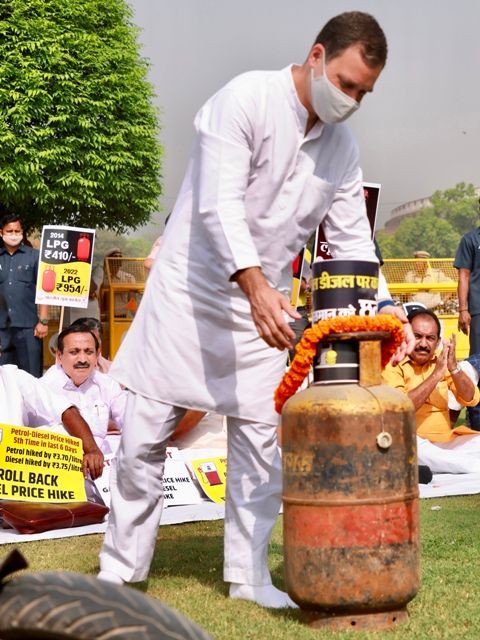 New Delhi: The Congress Party- its leaders and workers- hit the streets in nationwide protest against skyrocketing prices of Petrol-Diesel-LPG-CNG-PNG on March 31, 2022. The main protest event was led by former Congress President Shri Rahul Gandhi, who along with party MPs, staged a protest at Vijay Chowk outside the Parliament House, against the continuing mindless hikes in fuel prices, demanding immediate rollback.

Carrying placards, Congress MPs from Lok Sabha and Rajya Sabha raised slogans against the government and sat on a dharna against the rising prices of petrol, diesel and LPG.

Speaking to the media on the occasion, Shri Rahul Gandhi said, “We can see that petrol and diesel prices are climbing rapidly. Government is making thousands and thousands of crores from this. Over the last 10 days, 9 times, they have been raised. Congress Party is protesting across the country in districts, blocks, state capitals, here with our MPs against this price rise, against the rise of petrol and diesel prices. Government has to stop doing this. This is hurting the poorest people in the country and it is hurting the middle class. Government has to ensure that prices do not rise and they stop raising diesel and petrol.”

In addition to this, the All-India Mahila Congress marched in protest from Jantar Mantar to Parliament House. The main gate of the parliament had to be closed for more than an hour because of the protest. Later, they were detained at the Mandir Marg police station. Similarly, NSUI also held a protest outside petroleum ministry and demanded the Minister Shri Hardeep Puri to roll back prices. The protest was the first in series of protests planned under ‘Mehangai Mukt Bharat Abhiyan’. Congress leaders and workers, along with common people, protested outside their homes and in public places by garlanding gas cylinders, scooters/bikes, empty petrol/diesel cans to draw the attention of the deaf BJP Government against the incessant and insensitive increase in the prices of Gas-petrol-diesel.

In the next round of protest, Congress Party workers and leaders will hold Dharna and take out Marches at all District Headquarters across the country, demanding rollback of the fuel prices. Following this, the Congress workers, Frontal Organizations, Departments and Cells, along with labour associations, unions and civil society groups, will hold “Mehangai Mukt Bharat Dharna” at State Headquarters, being organized by the PCCs on April 07, 2022.

It may be noted that the Modi Government has earned nearly Rs. 26 lakh Crores by way of unprecedentedly high excise charges being fleeced from the common Indian. Rather than giving relief to the people who have faced job losses and falling incomes, the Modi government is showing its true inhumane character.