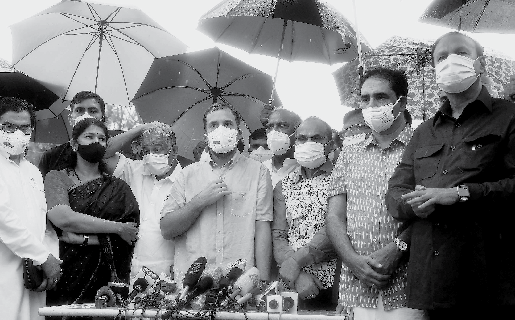 New Delhi: After a meeting of 14 opposition parties on July 28, 2021, Shri Rahul Gandhi addressed reporters at Vijay Chowk and said, “India’s entire opposition is standing here today. Leaders of all parties are here. Why did we have to come here? Because our voice is being suppressed in Parliament. We just have one question. Has the Government of India bought Pegasus, yes or no? Did the government use Pegasus weapon on its own people? Yes or no. That is all we wish to know.”

He further said, “We are clearly told by the government that there will be no talks on Pegasus in the House. I want to ask the youth of India, to the public - Narendra Modi ji has installed a weapon in your phone, that weapon was used against me. That weapon was used against the Supreme Court, against other leaders, against the people of the press and against the activists, then why should there not be a talk in the House? What is the reason behind this? This is the question.” On parliamentary disruptions, Shri Gandhi said, “It is being said that we are disturbing the Parliament. We are not disrupting the Parliament. We only wish to discharge our responsibility. All of us want to discharge our responsibility. This weapon has been used against India. This weapon should be used against terrorists, against traitors. We are asking Narendra Modi Ji and Amit Shah Ji as to why did they use it against the democratic institutions of India? What has the Indian democracy done that you have used the weapon against it? That is the question.”

On a question that you are saying that the government has made it clear that there will be no discussion of any kind on Pegasus, so how will the House run? Shri Rahul Gandhi said, “We will have to understand the idea. What is the problem before us? The people of the country will have to understand this. If we just say that we would not discuss Pegasus and we would discuss something else, the topic of Pegasus would be over. There can be no discussion on Pegasus after that. But the matter of Pegasus is for us a matter of nationalism, a matter of Treason. Because this is a weapon which has been used against democracy, it is not a matter of privacy. For me, it is not a matter of privacy. I call it an anti-national indulgence. Narendra Modi ji and Amit Shah ji have hurt the soul of democracy of India. That is why we want a discussion on Pegasus and that is why we won’t budge before we have a discussion on Pegasus.”

On another question that when the ministers of the government answer, the TMC MPs tear their papers, then how will it be talked about? Shri Rahul Gandhi asked the reporter not to distract and said, “I know who you work for. You don’t need to distract. People know that the democracy of India has been attacked. Their hearts and sentiments have been targeted. That is why we want to ask the government if it has done this or not.”