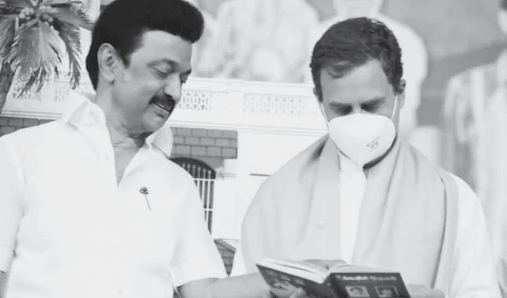 Chennai: Congress leader Shri Rahul Gandhi launched the first volume of Tamil Nadu Chief Minister MK Stalin’s autobiography ‘Ungalil Oruvan’ (One Among You) in Chennai on February 27, 2022. The first part of the autobiography contains his early life experiences. In it, he traces his school and college days, adolescence, early political contributions, marital life and the MISA.

Releasing the autobiography of Tamil Nadu’s Chief Minister M K Stalin, titled ‘Ungalil Oruvan’, Congress leader Shri Rahul Gandhi hit out at the BJP-led central government for ‘Snatching’ Jammu and Kashmir (J&K)’s powers and reducing it to a Union Territory (UT), which, he charged, has led to bureaucrats from Uttar Pradesh and Gujarat ruling it now.

Shri Rahul Gandhi made these comments while referring to National Conference leader Omar Abdullah’s remarks made in his speech earlier at the event, which was also attended by Kerala Chief Minister Pinarayi Vijayan and Bihar Opposition leader Tejashwi Yadav, among others.

Continuing on the theme of the BJP dispensation’s alleged attack on federalism, Shri Gandhi said that it has enhanced the Border Security Force (BSF)’s powers in states without the consent of their governments, which has resulted, he said, in “hundreds of acres of land” in a state like Punjab being “taken away” by the central force.

The Congress leader alleged that Prime Minister Narendra Modi was “Clueless about the history of Indian states and our diversity”. “Instead of listening to people’s voices and respecting our diversity, they have been imposing their agendas on different states…The voices of our people are not heard, not represented these days. Instead, the voices are being attacked, every institution such as judiciary, Election Commission, and media are being attacked systematically. But BJP shouldn’t be living in their illusions… We know how to fight them; we will fight them because they fight our history and tradition. They cannot defeat us,” he said at the function that turned into a rallying point of some leading Opposition figures.

This book launch is considered as an opposition gathering as leaders from several parties like CPIM, RJD, NC and representatives from Trinamool Congress, TRS, and NCP also joined the event. Earlier, Stalin lauded Gandhi’s speech on Tamil Nadu during the budget session last month, stating that the BJP can never rule over Tamil Nadu in their lifetime.

When asked why he mentioned Tamil Nadu so many times in his speech, Shri Rahul had also said, “I am a Tamil.” Stalin praised the Congress leader’s speech and thanked him on behalf of all Tamils. “You have voiced the long-standing arguments of Tamils in Parliament, which rest on the unique cultural and political roots that value self-respect,” Stalin said.

Emphasizing that there must be no compromise with Congress’ ideology, he said that he saw a huge opportunity for the Congress in the State. “We are partners with the DMK and we have to do everything we can to strengthen this alliance. The best way to do this is by strengthening ourselves, organisationally and at grassroots level,” he said. It may be noted that Congress won 13 of the 16 seats that it had contested in the urban local body polls in the city.

While congratulating the newly elected councillors, he said that the role was an important one as it was the closest to the people. He also met the children of those who lost their lives in the bomb blast that killed former Prime Minister Rajiv Gandhi.

Taking his leave, he told the cadre, “It’s an honour to come here. I look forward to working with you and help build this wonderful party in this beautiful State.” TNCC President KS Alagiri and assembly floor leader K Selvaperunthagai also addressed the gathering.