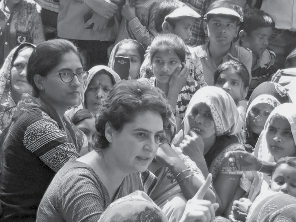 During the second wave of Corona epidemic, Congress has started ‘Seva Satyagraha’ to serve people. Congress’ General Secretary Smt. Priyanka Gandhi has sent 10 lakh medical kits to UP. The first consignment of medicines has already been sent to the districts around Lucknow.

It is worth mentioning that due to the poor health system in the rural areas of Uttar Pradesh, there is a huge shortage of medicines even for fever. People will get a lot of relief from the ‘Home Isolation Corona Treatment Kit’ being distributed by the Congress.

There are six strips of medicines in each ‘Home Isolation Corona Treatment Kit’. Instructions for use of each medicine are also written on the kit. Congress will distribute these kits through its Block Presidents, on the advice of doctors. Not only this, sanitization of villages is also to be done under the ‘Seva Satyagraha’ campaign. The first consignment of 18 thousand liters of sanitizer has also reached Lucknow.

‘Smt. Priyanka Gandhi’s Letter will be Carried to Every Village by Congressmen along with their Service’ Congress General Secretary Smt. Priyanka Gandhi is communicating through letters with the representatives who won the Panchayat elections. Earlier, the Congress General Secretary had sent cards to the newly appointed Chiefs to congratulate them.

Congratulating the Panchayat Representatives in a letter this time, Smt. Priyanka Gandhi has appealed them to cooperate during the corona epidemic.

She has written in her letter that it has become clear that the concern of the government lies not in saving the lives of the people but in saving the image of a leader.

She further wrote - it is unfortunate for us that despite being the largest manufacturer of vaccines, there is a shortage of vaccine in our country. It is the demand of humanity to rise above political differences and help everyone.