We need to protect our democracy and social harmony regardless of who is in power: Smt. Sonia Gandhi 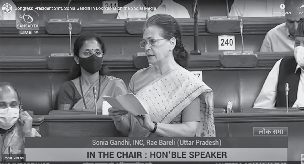 New Delhi: Congress President Smt. Sonia Gandhi on March 16, 2022, urged the government to put an end to the alleged “systematic interference” of Facebook and other social media giants in India’s electoral politics.

Making a Zero Hour submission in the Lok Sabha, Congress President Smt. Sonia Gandhi raised an issue during the zero hour in Lok Sabha. Here is the full text of the submission:

Mr Speaker Sir, thank you for allowing me to take up an issue, which is of paramount importance and that is the rising danger of social media being abused to hack our democracy. Global companies like Facebook and Twitter are used increasingly to shape political narratives by leaders, political parties and their proxies.

It has repeatedly come to public notice that global social media companies are not providing a level playing field to all political parties. Last year, for instance, the Wall Street Journal reported on how Facebook’s own hate speech rules are being bent to favour politicians of the ruling party. Recently, Al Jazeera and the Reporter’s Collective have demonstrated how a toxic ecosystem of proxy advertisers posing as news media is flourishing on Facebook, bypassing election laws of our nation, breaking Facebook’s own rules, and completely suppressing the voice of those who are speaking up against the government.

Sir, the blatant manner in which social harmony is being disturbed by Facebook, with the connivance of the ruling establishment is dangerous for our democracy. Young and old minds alike are being filled with hate through emotionally charged disinformation and proxy advertising. Companies like Facebook are aware of this and are profiting from it. These reports show a growing nexus between big corporations, the ruling establishment and global social media giants like Facebook.

Sir, through you I urge the government to put an end to this systematic influence and interference of Facebook and other social media giants in the electoral politics of the world’s largest democracy. This is beyond partisan politics. We need to protect our democracy and social harmony regardless of who is in power. Thank you.