You are putting this Nation, this Wonderful Nation and its people at huge risk 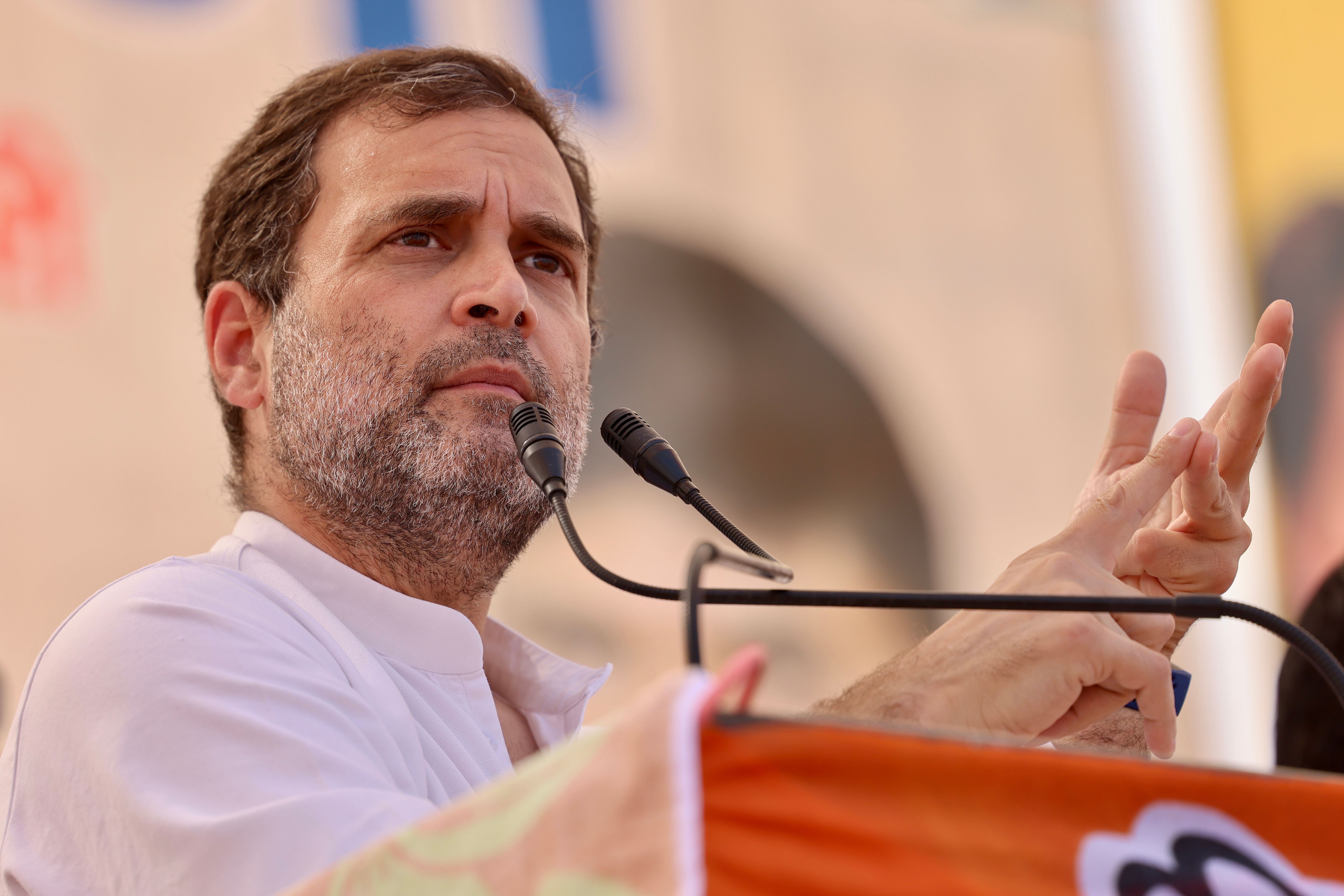 The first and what I considered to be the most important is the idea that there are now two India-s. There is now no longer one India. There are two India-s. One India is for the extremely rich people- for those who control the heartbeat of the country; and then another India for the poor. The gulf between these two India-s has been ever-widening. Poor India does not have employment today. There was not a word about unemployment in the Presidential Address and today all over India, the youth is desperately looking for employment. And your government is unable to provide it. I want to give you the figure - You talk about providing employment, whereas in 2021, three crore youth lost their jobs. The highest unemployment in 50 years is seen in India today. You talked about ‘Make in India’, about ‘Start-up India’, but our youth did not get the much-deserved employment opportunities and whatever opportunities were there also got disappeared and this is the truth.

So how did this situation arise? In the last seven years, you have attacked the unorganized sector and small and medium industries in a row. You did it through demonetization, through implementation of wrong GST and by not giving the support which had to be given at the time of Corona. As a resultant of which, the income of 80 percent of the people of India has decreased and they are rapidly moving towards poverty. The UPA government had lifted 27 crore people out of poverty in 10 years. This is not our self-made data. You may laugh to your heart’s content, but this is not self-made data. This is the real figure.

Today, Monopoly is being formed in the formal sector. One person gets all the ports of India, all the airports of India, power, transmission, mining, green energy, gas distribution, edible oil, whatever happens in India, Adani ji is seen everywhere. And on the other side - Ambani ji –with monopolies in petrochemicals, telecom, retail, e-commerce.

You keep talking about ‘Make in India’, ‘Made in India’, but it can’t be ‘Made in India’ today. The talk is over because the ones who create ‘Made in India’ are small and medium ones. You have uprooted them. You have eliminated them. If we talk about manufacturing jobs, I have the figures here. Manufacturing jobs have decreased by 46 percent in the last five years. Why? Because you have destroyed MSMEs, that is why.You are focusing completely on five or ten people. I don’t have a problem with that. I don’t have a problem with big industries, focus on them, but please realize that they cannot produce jobs for you. Small and medium industries are the only people who can produce jobs for you, that is the reality.

Today, 100 richest people of India have more property than 55 crore people of India. Understand the seriousness of the matter, 10 people have more wealth than 40 percent of India, 10 people. How did this happen? You did this, Narendra Modi ji did this and I give you a suggestion, Prime Minister sir, I suggest you - these two India-s you are making, start the work of connecting these two India-s quickly otherwise the country will suffer.

If you read the Constitution of India, you will find that India is described as a Union of States. India is not described as a nation; it is described as a Union of States. What does that mean- that means my brothers from Tamil Nadu have the same right as my brothers and sisters from Maharashtra, as my brothers from Uttar Pradesh, as my brothers from Bihar, as my sisters from Manipur, Nagaland, Mizoram, Jammu and Kashmir. I would like this Parliament House to start serious discussions instead of the type of discussions that we are having. What I heard in the first address today was not serious. What I heard Shri Dwivedi say, was not serious. It did not behoove this house. It was not at the standard that this house should be used to. It is not at the standard that India should watch. Now, no matter what fantasies you might have. You will never ever rule over the people of the states of India. It has never been done in 3,000 years, never ever. The only way India has been ruled and you can look at any empire you want, you can look at Ashoka the great, you can look at the Mauryas, you can look at the Guptas, you can look at any one you want, It has always been ruled by conversation and negotiation. Now, what is the problem? The problem is you people are confused. The problem is, you people think, that these languages, these cultures, these histories, you think that you can suppress them. You have no idea of history. You have no idea what you are dealing with.

Now, Speaker Sir, what is happening is that the instruments of the conversation between our states, between our peoples, what we call the institutions of our country are being attacked and captured by one idea.

The farmers of Punjab can stand up and say, we do not agree with these three laws. They do not have a voice in your framework; only the king has the voice. The farmers can sit for one year, they can sit for one year outside in Corona, they can die, doesn’t matter, the king doesn’t agree. You do not listen to anybody and even all of you, my dear brothers and sisters in the BJP, I saw my Dalit colleague speak today, Paswan Ji, I saw him. He knows the history of the Dalits. He knows who has suppressed the Dalits for 3,000 years and he is speaking with the hesitancy, he is speaking without. I am proud of him. I am proud of this gentleman. He has spoken to me what is in his heart. I am proud of this man, but he is in the wrong party. Don’t worry, don’t be sacred.

A particular organization has captured the institutional framework of the country and is attacking the voice of the different states of this country. And my fear is that you will get a reaction from that voice. My fear is that this attack, that you are carrying out on the institutional framework of this country is going to get a response from the Union of States. You have already started creating the problem. The problem has already started in the north-east. The problem has already started in Tamil Nadu. It is not visible to you right now.

My understanding is that the RSS and the BJP is playing with the foundations of our country and they are weakening the foundations of our country. They are weakening the links between our people. They are weakening the links between our languages. Now, they have further weakened the country by ensuring that not a single Indian youngster can get a job. So today, unlike a decade ago, 15 years ago, India is weak. Ask yourselves, why you are not able to get a guest on Republic Day, ask yourself that question. Don’t look surprised, ask yourself that question. What is happening that India today is completely isolated? We are completely isolated and surrounded. We are surrounded in Sri Lanka, Nepal, Burma, Pakistan, Afghanistan, China, everywhere we are surrounded and our opponents understand our position.

We have been weakened. The conversation between our people is not taking place. Our institutions are under attack and we are completely surrounded. The Chinese have a very clear vision of what they want to do. They are very-very clear. The single biggest strategic goal of India’s foreign policy has been to keep Pakistan and China separate. This is fundamental for India and what you have done is, you have brought them together. Today, do not be under any illusion. Do not underestimate the force that is standing in front of us. Do not underestimate the power that stands in front of us, do not underestimate it. You have brought Pakistan and China together and this is the single biggest crime that you could commit against the people of India.

I can see that China has a clear cut plan. The foundations of their plan have been put in place in Doklam and in Ladakh. Don’t underestimate what we are facing. This is a very-very serious threat to the Indian nation. We have made huge strategic mistakes in Jammu and Kashmir. We have made huge strategic mistakes in our foreign policy and if we do not correct those mistakes. What are the mistakes, I have just told you. You have brought China and Pakistan together, you have taken the concept of two different fronts and converted it into one unified front and by the way, in case you haven’t realized this, in case you haven’t understood what is going on, it is very clear that the Chinese and the Pakistanis are planning. Look at the weapons that they are buying, look at their activity, look at the way they are talking, look at who they are speaking to.

I am clearly stating in the house of Parliament that we have made a massive blunder and we need to make sure, absolutely sure, that we can defend ourselves against the Chinese. Please remember what I am saying, because the Chinese will. Remember what I am saying and remember that you will be responsible for anything that happens, that is why it is important that as a nation we start this conversation. It is important as a nation that you listen to what we say, because we have experience, we have understanding. You might not think so, but we have people on this side who understand these things, have great understanding. Use us. I can see that some of you are understanding what I am saying. I am happy, I can see.

The nation is now at risk. The nation is at risk from outside. The nation is at risk from inside and that is a very dangerous place for a nation to be and I don’t like it. I am very uncomfortable with my nation, with my beloved country standing where it is standing. Completely isolated on the outside, fighting on the inside, institutions captured, states are not able to speak to each other. This worries me. It frightens me for my country and so that is why, I thought it was important that I speak today. I know that many of you will just rubbish what I am saying. I understand it that you would have been told to do and I am happy to let you do it, but remember what I said. You are putting this nation, this wonderful nation and its people at huge risk. Thank you!