It is our duty to offer constructive criticism and suggestions, and be the voice of the people: Sonia Gandhi 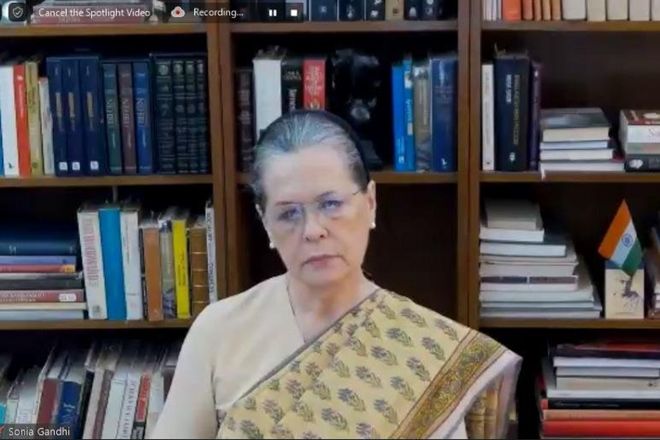 I welcome you and I am grateful that each one of you has made it possible for us to hold this meeting, virtually.

First of all, on behalf of all of you, I wish to express my profound sense of sorrow at the enormous damage caused in West Bengal and Odisha by Cyclone Amphan, including the loss of 80 lives.

Before I touch upon the issue of the pandemic and the current situation, I would like to point out that India was facing an economic crisis even before the first corona virus case was identified. Demonetization and a hasty and flawed GST were amongst its main causes. The economic downturn began in 2017-18.Seven quarters of declining GDP growth was no ordinary event; it was unprecedented. Yet, the government carried on with its misguided policies and incompetent governance.

As we all know, on March 11, WHO declared COVID-19 as a pandemic. All of us in the Opposition offered our full support to the government. Even when the lockdown was imposed on March 24, with barely 4 hours’ notice, all of us supported the decision despite its suddenness and obvious unpreparedness of the government.

The initial optimism of the Prime Minister that the war against the virus would conclude in 21 days has turned out to be misplaced. It seems that the virus is here to stay until a vaccine is found.I am also of the view that the government was uncertain about the criteria for lockdowns, nor does it have an exit strategy. Successive lockdowns have yielded diminishing returns. The government also stumbled badly on the testing strategy and the import of test kits. Meanwhile, the pandemic continues to take its toll.

The economy has been gravely crippled. Every economist of repute had advised an immediate need for a massive fiscal stimulus. The Prime Minister’sannouncement on May 12 of a grand Rs. 20 lakh crore package - and the Finance Minister spelling out its details over the next five days, have turned out to be a cruel joke on the country.

The defining image of the pandemic has been the lakhs of migrant workers, many with children, walking hundreds of kilometres, without money, food or medicines, desperate to reach their home states.

Apart from the plight of the migrant workers, those who have been cruelly ignored include the 13 crore families in the bottom half of the population, namely - the tenant farmers and landless agricultural workers; the laid off or retrenched workers and employees; the shopkeepers and the self-employed; the 5.8 crore out of the 6.3 crore MSMEs; and organized industries, including the large businesses, that drive our country’s growth.

Many of us, the like-minded parties, had demanded that cash must be transferred to the poor, that free grain must be distributed to all families, that buses and trains must be arranged for the migrant workers to go back to their homes. We emphasized that Wage Assistance and Wage Protection Funds must be set up to protect the employees and the employers. Our pleas have fallen on deaf ears.

Far from offering succour and support, the government has embarked on a wild adventure of so-called reforms including a grand clearance sale of PSUs and repeal of labour laws. There is not even a pretence of consultation with stakeholders or debate in Parliament. We deplore these unilateral moves.

A number of renowned economists are predicting that 2020-21 will end with negative growth of up to minus 5 per cent. The consequences will be catastrophic.

That the present government has no solutions is worrying; but that it has no empathy or compassion for the poor and vulnerable is heartbreaking.

The government has also abandoned any pretence of being a democratic government. All power is now concentrated in one office, the PMO. The spirit of Federalism which is an integral part of our Constitution is all but forgotten. There is no indication either if the two Houses of Parliament or the Standing Committees will be summoned to meet.

Friends, it is our duty to offer constructive criticism and suggestions, and be the voice of the people. It is in that spirit that we are meeting today. I would now like to request each of you to give your considered views.

We, the opposition parties, extend our sympathy and support to the government and people of West Bengal and Odisha in meeting the impact of the devastation caused by Cyclone Amphan.

This meeting of leaders of opposition parties conveys its deepest condolences to the families of those who have lost their lives.

We express our solidarity and sympathies with the pain of those who have suffered other losses.

The country and its people are already in the midst of a grim struggle for survival, combating the Covid 19 pandemic.

A natural calamity like Cyclone Amphan has come as a double blow, breaking the spirits of the people.

People in both these states urgently need support and solidarity of the governments and people of the country.

Opposition Parties, therefore, urge the central government to immediately declare this as a national calamity and substantially help the states in facing the impact of this disaster.

At this juncture, relief and rehabilitation should be the top most priority. But the possibility of an outbreak of other diseases as a result of such calamity must also not be ignored.

Henceforth, we the Opposition Parties call upon the central government to provide urgent help to our fellow citizens/countrymen.

A Report on meeting of Like-minded Political Parties

New Delhi: Twenty-two like-minded parties met on 22nd May, 2020, to exchange views on the extraordinary situation in the country, arising out of the Covid-19 pandemic. The parties were of the view that the economy has collapsed, all sections of society are facing acute distress, livelihoods are destroyed and precious lives are lost.

The like-minded parties applauded the heroic efforts of all public health personnel, particularly, doctors, nurses, paramedics as also police and security forces personnel, cleaners and those maintaining essential services like water, power etc., across the country in these challenging times. They have shown extraordinary courage and dedication. The Congress Party felt humbled by their devotion to duty at a time of grave peril to their own lives.

Acutely conscious of the magnitude of the present crisis, the like-minded parties extended their full cooperation to the Union Government. But it was also pointed out that the Union Government failed in discharging its responsibilities in a timely, effective and sensitive manner. Grand announcements were made but they did nothing meaningful to alleviate the sufferings of people and address the pressing concerns of farmers and farm laborers, of migrant and other workers, of trade & commerce, of MSMEs and of industry. In fact, Union Government unabashedly usurped powers vested in the States, undermining the constitutionally guaranteed federal democracy.

The like-minded parties were of the strong view that this is neither the time for Government at the Centre to indulge in showmanship nor in one-upmanship. The present time calls for a gigantic collective endeavor. This is what the people of India need and this is what the people of India demand. It was a consensus that it’s important for the Government of India to reach out and engage in a dialogue with all political parties in a systematic manner, listen seriously to the suggestions that they have to make, activate Parliamentary institutions like Standing Committees and be genuine in helping the states; financially and otherwise.

Opposition parties represent over 60 percent of India’s people. Therefore, they made an appeal to the Union Government to listen and consider the following 11 demands: