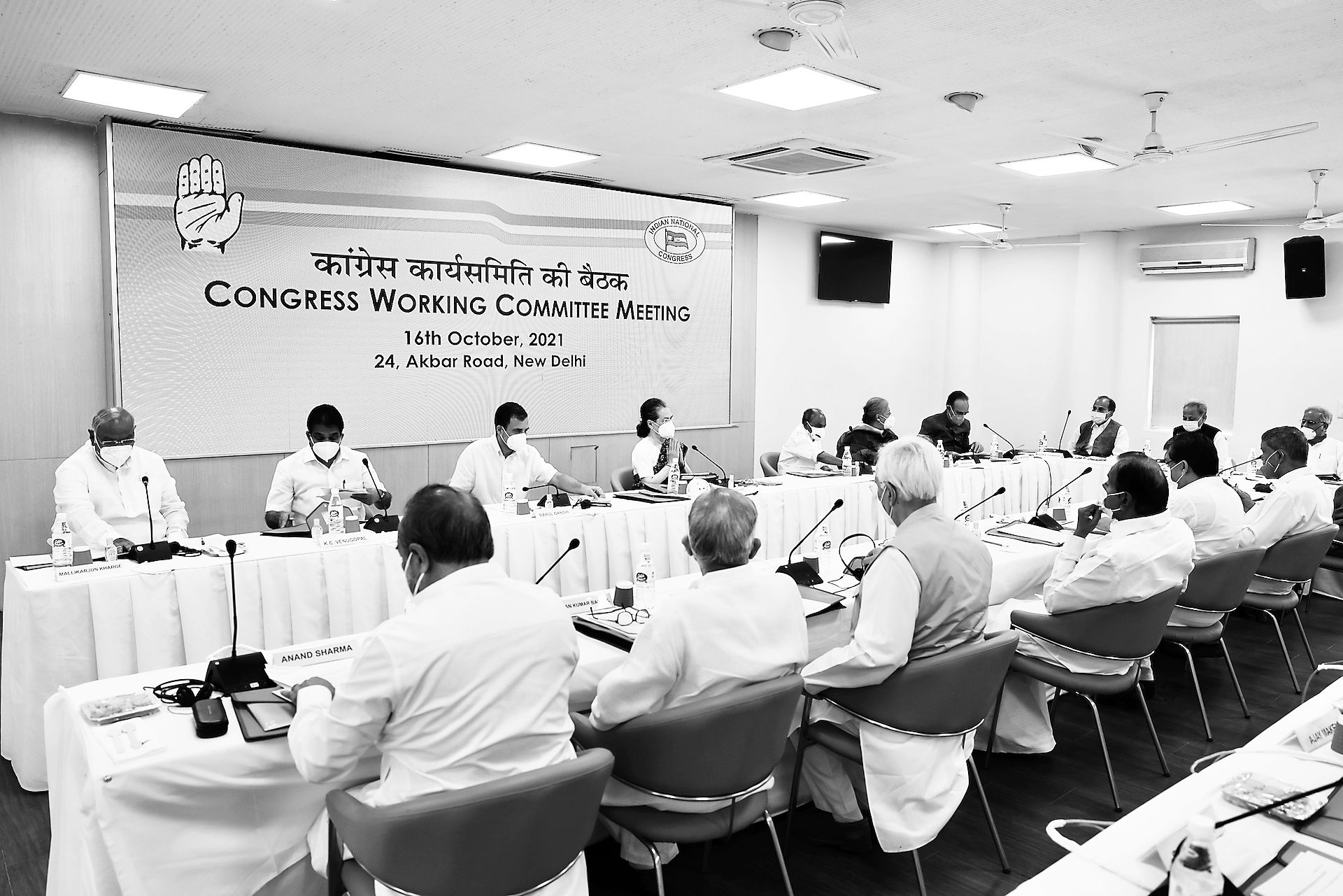 A meeting of the Congress Working Committee Chaired by Hon’ble Congress President, Smt. Sonia Gandhi was held on October 16, 2021,at the AICC Headquarters, New Delhi.

Due to the Covid pandemic, physical meeting of the CWC was held after almost 18 months. In between, 7-8 virtual meetings were held, but CWC could not meet physically because of the pandemic.

At the outset, there were two obituary references, condolence resolutions on ‘Oscar Fernandes Ji’ and ‘Rajeev Satav Ji’.

CWC meeting was conducted to discuss the important agendas. The agenda was on current political situation, the forthcoming Assembly Elections and Organizational Elections.

CWC passed three resolutions - One on the Political Situation, one onInflation and one on Acute Agrarian Distress & Diabolical Attack on India’s Farmers. Following this, the CWC also discussed the proposed significant and revolutionary training programme for the party workers and leaders.

A massive training programme was organized from top-to-bottom for the Congress Party leaders. Party has decided to undertake regular and continuous training programmes for the leaders and workers at all levels. Through these regular and continuous programmes, the workers and leaders will be trained in party ideology, policies, expectations of a Congress worker, grass-root messaging, election managements, failures of present government and countering propaganda.

In this regard, it has been decided to conduct an orientation camp for state trainers and In-charges at Sevagram, Wardha from 12-15 November. After that state level, district level and block level training will be conducted regularly.

Further, CWC also discussed and decided to observe a mass agitation, awareness programme, named ‘Jan Jagran Abhiyan’ across the country on runaway inflation and price rise between November 14and November 29, 2021. Through this mass awareness/contact programme, the party workers would reach up to the maximum number of people and create awareness on bad handling of economy by the Central Government and the resulted price rise.

During the two-weeklong ‘Jan Jagran Abhiyan’, all the senior office-bearers of PCC, DCC, Block committees, all frontal organizations, departments, and cells will undertake a long ‘Pad Yatra’ to touch each polling booth.

Not the public meeting, but small group meetings will be held to interact with the common people. It has also been decided that for the successful implementation of the mass awareness/contact programme, the PCCs will set up control rooms in each state and state level trainers will be given 2-3 days’ training in the AICC. They will further train designated people at district and booth level.