Now why is there Dictatorship? Because there is heist: Rahul Gandhi 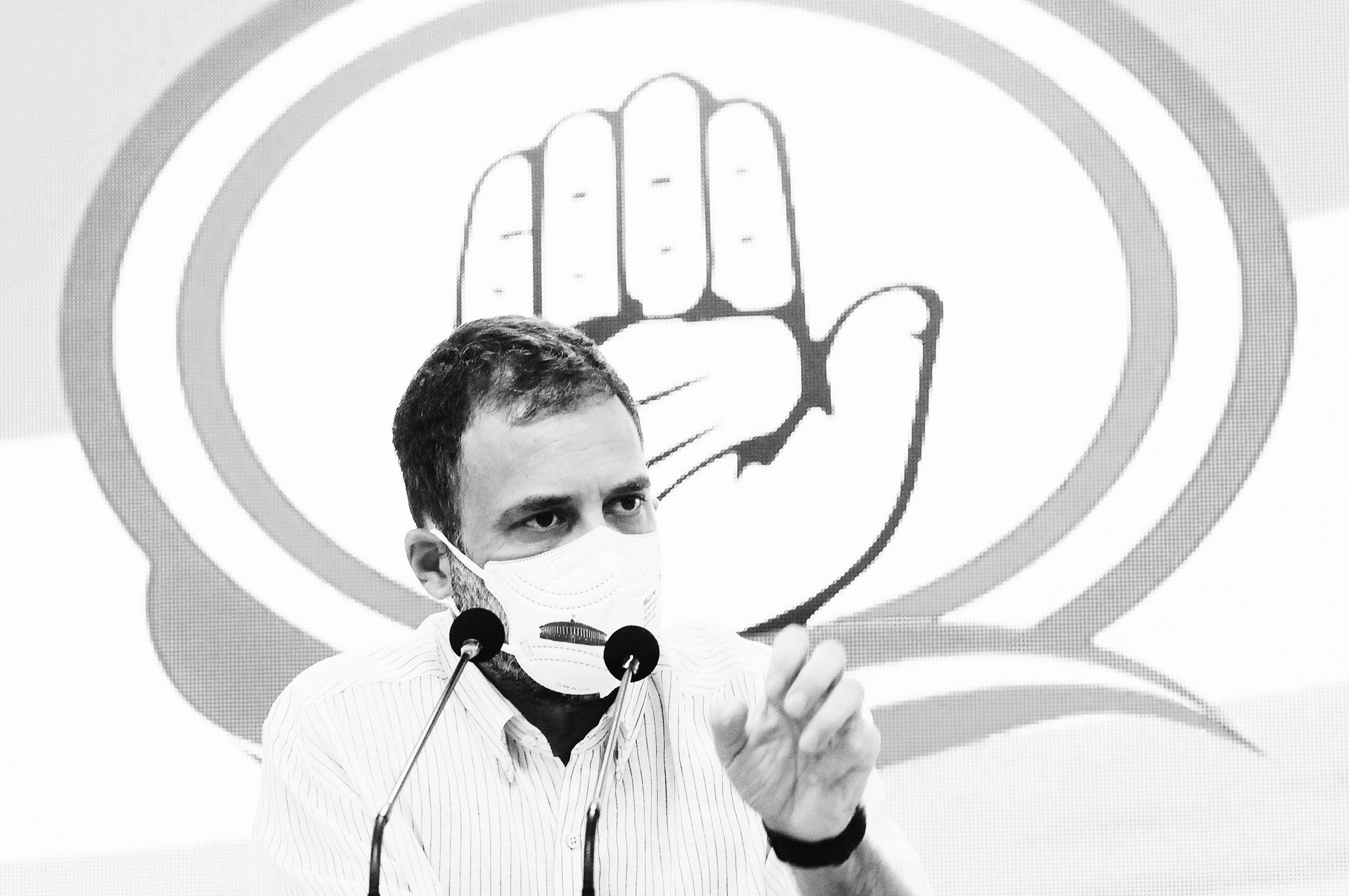 While addressing the journalists Shri Randeep Singh Surjewala said that this special press conference of All-India Congress Committee is being organized in an atmosphere of sorrow and distress, when the Annadata and the law of the country are being crushed. I request respected Shri Rahul Gandhi ji to put his point before you.

On the other hand, farmers across the country are being systematically attacked in a row. The first attack was - to reverse the Land Acquisition Bill. Second, the three new black laws which have been brought and third is that whatever belongs to the farmers is being systematically snatched from them today. This is happening in front of everyone. That’s why the farmers of the country are sitting outside Delhi.

On a question about talking to other opposition leaders, Shri Rahul Gandhi said- This is, please be clear, this is a press conference about the farmers, the farmers’ issue and the murder that has taken place in Uttar Pradesh. I would recommend that you don’t try and distract that. I am here to speak on that issue.

On another question that today you are going to Lakhimpur Kheri, will you be allowed to go? Shri Rahul Gandhi said that we have written a letter about that. We are three people who are going. Section-144 stops five people, three people can go under section-144. We have written a letter to them. This is what is happening in UP, farmers are being killed; But before that it had happened in Hathras as well and one of their MLAs had also raped. This new type of politics is happening in Uttar Pradesh very systematically. Criminals can do whatever they want to do, be it rape or murder of farmers and those who kill, those who rape roam freely out of jail and those who die, are imprisoned.

On another question that Priyanka Gandhi ji is kept under arrest, why is she not being allowed to go to Lakhimpur Kheri, while some other parties were allowed to go, Shri Rahul Gandhi said that we want to go there and see, we want to understand, want to support the family. Only we are being stopped, while the rest of the parties are being allowed to go. What mistake have we committed and as far as Priyanka is concerned, it is okay, but the priority is for the farmers’ issue.

On another question that yesterday the Chief Minister of Chhattisgarh was stopped from going there, today you guys are going. You people are alleging that the government is hatching a conspiracy and BJP is accusing the opposition of doing politics? Shri Rahul Gandhi said that let me explain this to you a little. Like you just said that this is politics. Look, our job, the job of the opposition is to create pressure. When we create pressure, only then there is action. We created pressure in Hathras, only then the action was taken. The government wants us not to raise this issue, not to create pressure so that the murderers run away freely. Had we not gone to Hathras, all those who had raped there would have escaped Scott free. Had we not spoken about their MLA before that, he would have escaped. So that’s why we’re pressurizing them. Why are we putting pressure? Because farmers have been wronged. They have been killed and to be honest it is your job. You people do not do it, you do not fulfill your responsibility. On the contrary, you ask the question that you are indulging in cheap politics. You forgot that even you have a responsibility and then you pose questions on us. On another question that you are going to go to Lucknow today, the question is that the Union Minister of State for Home Affairs says that you should improve your ways. Haryana Chief Minister Manohar Lal Khattar says that flog with lathis, go to jail and become a leader. Supreme Court has also clarified the intention regarding farmers, so why is this happening to farmers in an agrarian country? Shri Rahul Gandhi said that because the structure of the country, the institutional structure has been taken over by BJP-RSS. And it is not just about the media. You know how the media is controlled. Similarly, all the other institutions of India have been controlled. It’s a simple answer.

Look, the democracy that used to be here in India, is now a dictatorship. Politicians cannot go to Uttar Pradesh. We are being told since yesterday that you cannot go to Uttar Pradesh. The Chief Minister of Chhattisgarh goes to meet the farmers, he is told that there is section-144 there. He said (pointing to Shri Bhupesh Baghel) I am alone, how will section 144 be implemented? No answer. Now why is there Dictatorship? Because there is heist. The small-medium businesses, small traders are being robbed, farmers are being robbed and the common people are being robbed. Petrol, diesel prices keep rising and the voice of India is being suppressed.

On another question about how do you respond to the narratives that have been built about the agitations? Shri Gandhi said-See, it is a narrative that has been built by the forces that I mentioned. It is a narrative that is built using institutions. It is built using police, it is built using all these different structures, but what you will find-is that there is a limit to this narrative and you will find soon rather than later. There will be an explosion, the size of which, people are not understanding. So, what we are trying to do is- we are trying to tell the government, let the democratic process work. This is what the country is about; do not interfere with the democratic process, because it is a safety valve. If you shut the safety valve, other types of problems will come.

So, we are pushing for maintaining the democratic process. We are also pushing, when we go, when the Chief Ministers, myself, others go to visit this family, we are trying to give them confidence that in this country, you cannot be run over by a criminal, who calls himself the Home Minister’s son and then nothing happens, we are not going to allow that. That is the message; we are trying to give them. It is a message of hope.

Today, those families don’t have hope. Today, the farmer doesn’t have hope that is what we are doing.

In response to another question, how do you see the way Smt. Priyanka Gandhi was arrested for preventing her from going to Lakhimpur Kheri, the way she was manhandled, Shri Gandhi said whether it is Priyanka, whether it is I, no matter whoever it is from our family, manhandling doesn’t bother us, at all. Whatever you do with us, we don’t care. We are talking about farmers. Imprison us, manhandle us, kill us, bury us, it doesn’t matter. This is our training, years old training. We have got these values from our family, so it will not make any difference.

On another question that an important video has surfaced, in which a jeep is being run over on farmers. The PM went to Lucknow but did not utter a word. The culprits have not been arrested yet, so in these circumstances do you hope that some action will be taken in this case? Shri Gandhi said that we do not have any hope of that kind, we will have to put pressure. Nothing will happen without pressure. And we will put pressure, we will try. But look, the question you are asking is a ridiculous one. Because such a question should not arise in democracy. You are saying that look brother, someone has crushed 6 people over there and our Prime Minister is going there, and you are asking me that the person whose son did it, will any action be taken against him or not? Such a question can only be asked in Dictatorship and not in Democracy.

On another question that you as well as all other party leaders have been stopped from going to Lakhimpur Kheri, what will you say? Shri Gandhi said that not everyone has been stopped. Two parties went yesterday, TMC and Bhim Army.

On another question whether there is deliberation on forming a joint front with other parties so that the way the government is treating the farmers, other parties come together to fight them. Will you talk to the opposition within the parliament also? Shri Gandhi said that look, as I told you, opposition unity is a very good thing, it should be there, but this press conference, has been organized for the farmers. We don’t want to get distracted. We want to respect the people who have been killed there and only want to talk about them here.

On another question that Congress delegation is not likely to be allowed to go to Lakhimpur Kheri, Shri Gandhi said- Let us see, when we go there, what happens. I cannot predict what is going to happen, but we will go and see. My goal is to go and meet the families of the people who have been killed. Let’s see.

Thank you very much!