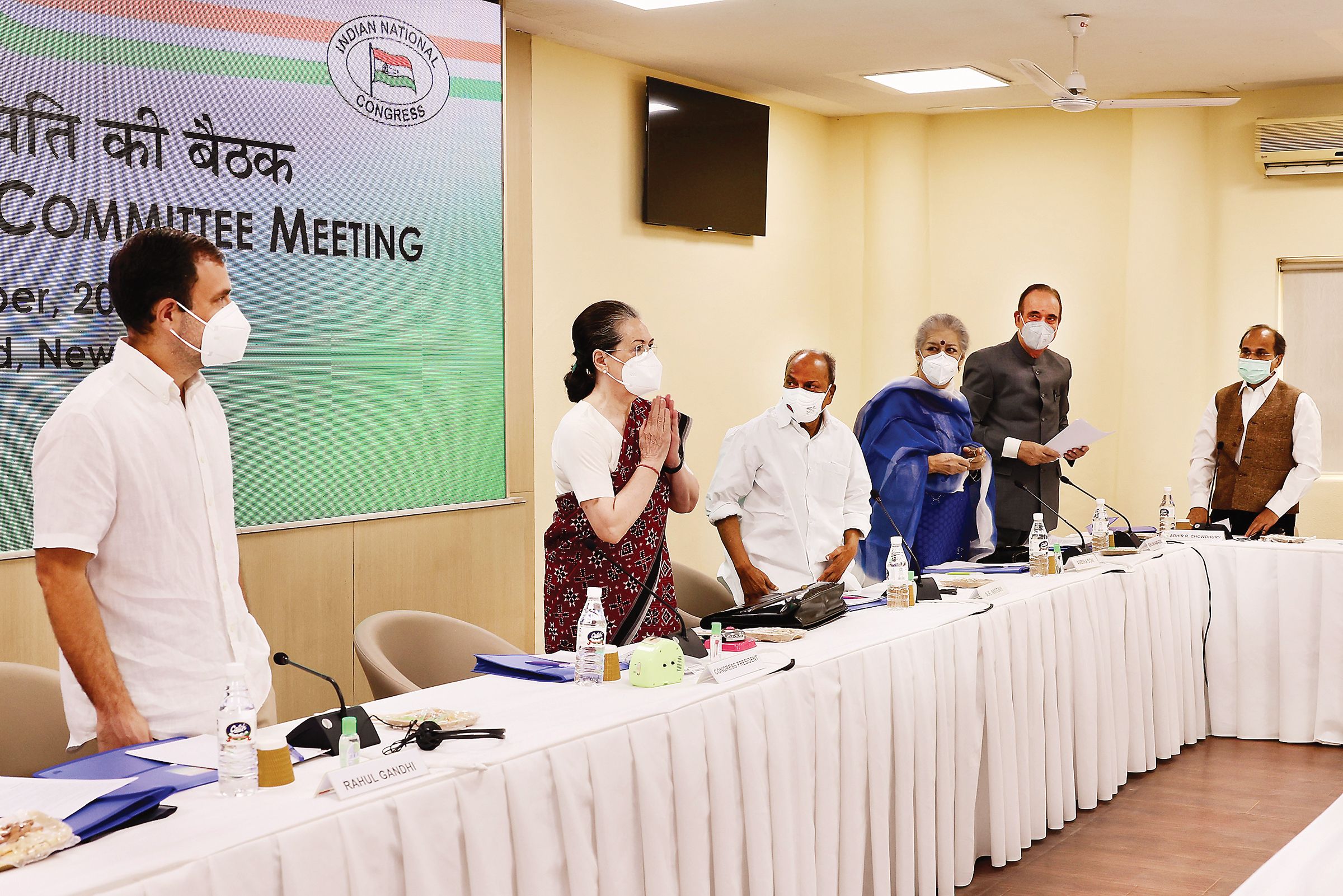 Welcome to all of you. I have been wanting to have this meeting ever since Parliament adjourned. Now that all of us are doubly vaccinated, I decided we could meet physically with our masks on. Let me at the very outset wish Dr. Manmohan Singh ji a full and speedy recovery.

We are meeting in the background of the continuing agitation by farmers and farmers’ organisations. It has been over a year since the ‘teen kaale kanoon’ were bulldozed through Parliament. We had done our best to have them subjected to legislative scrutiny, but the Modi Government was hell bent on getting them passed so that a few private companies could benefit. Farmers began their protests immediately and have suffered much since then. The shocking incidents at Lakhimpur-Kheri recently betrays the mindset of the BJP, how it perceives the Kisan Andolan, how it has been dealing with this determined struggle by Kisans to protect their lives and livelihoods.

The economy continues to be a cause of great concern in spite of the government propaganda to make us believe that it is not. As we all know, the only answer the Government seems to have for economic recovery is selling off national assets built with great effort over the decades. The public sector has had not just strategic and economic objectives---it has had social goals as well, as, for instance, empowerment of scheduled castes and scheduled tribes and development of backward areas. But all this is in jeopardy with the Modi government’s single-point agenda of Becho, Becho, Becho. Meanwhile, prices of essential commodities - food and fuel included - continue to rise unabated. Could anyone in the country ever imagine that petrol prices would be over 100 rupees a litre, diesel would be nearing the 100 rupees a litre mark, a gas cylinder would cost 900 rupees and cooking oil would be 200 rupees a litre? This is making life unbearable for people across the country.

Since we last met, the Government of India has changed its vaccine procurement policy. This has been done in response to the demands of the states. This was one of those rare occasions when the states were actually heard and the country benefitted. Even so, cooperative federalism remains only a slogan and the Centre loses no opportunity to put non-BJP states at a disadvantage.

In recent days, there has been a sudden spurt in killings in Jammu and Kashmir. Minorities clearly have been targeted. This must be condemned in the strongest possible terms. We have done so, and I do so again this morning. J&K has been a Union Territory for two years. The entire responsibility for bringing the perpetrators of these barbaric crimes to justice is that of the Union Government. Restoring social peace and harmony and confidence amongst the people in J&K rests with the Modi government too.

There has always been a broad consensus on foreign and neighbourhood policy in our country. But that consensus has been damaged because of the Prime Minister continued reluctance to take the Opposition into confidence in any meaningful manner. Foreign policy has become a diabolical instrument of electoral mobilization and polarization. We face serious challenges on our borders and on other fronts. The Prime Minister telling the opposition leaders last year that there had not been any occupation of our territory by China and his silence ever since is costing our nation dearly.

Let me now turn to the forthcoming Vidhan Sabha elections. Our preparations had already begun a while back. Undoubtedly, we face many challenges but if we are united, if we are disciplined and if we focus on the Party’s interests alone, I am confident that we will do well.The respective General Secretaries and In-Charges will be briefing us on the states individually and so I will not like to say anything more now on this subject.

Finally, the matter of organizational elections. The entire organization wants a revival of the Congress. But this requires unity and keeping the Party’s interests paramount. Above all, it requires self-control and discipline. I am acutely conscious of the fact that I have been interim Congress President ever since the CWC asked me to return in this capacity in 2019.We had thereafter, you may recall, finalized a roadmap for electing a regular President by June 30, 2021. But the second wave of Covid-19 overtook the country and this deadline was extended indefinitely by the CWC in its meeting held on May 10, 2021. Today is the occasion for bringing clarity once and for all. A Schedule for full-fledged organizational elections is before you. General Secretary, Organization, Venugopalji will brief you on the entire process later.

I am, if you will allow me to say so, a full-time and hands on Congress President. In the last two years, a large number of our colleagues, particularly the younger ones have taken on leadership roles in taking party policies and programmes to the people--whether it be the agitation of farmers, provision of relief during the pandemic, highlighting issues of concern to youth and women, atrocities on dalits, adivasis and minorities, price rise, and the destruction of the public sector. Never have we let issues of public importance and concern go unaddressed. You are aware that I have been taking them up with the Prime Minister as have Dr. Manmohan Singh and Rahul ji. I have been interacting with like-minded political parties regularly. We have issued joint statements on national issues and coordinated our strategy in Parliament as well.

I have always appreciated frankness. There is no need to speak to me through the media. So let us all have a free and honest discussion. But what should get communicated outside the four walls of this room is the collective decision of the CWC.