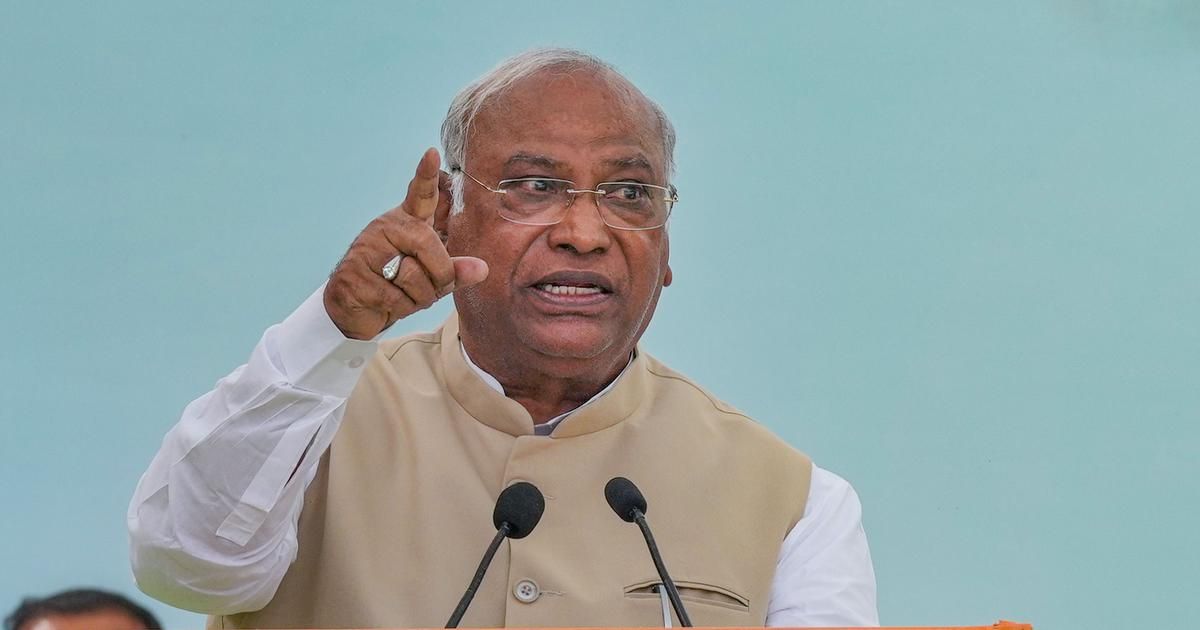 Dediapada (Gujarat): On November 27, 2022, in the tribal-dominated Narmada district in Gujarat, Congress President Shri Mallikarjun Kharge dubbed Prime Minister Narendra Modi a “Chieftain of liars” who tries to gain sympathy by playing a victim card and calling himself poor.

He alleged PM Modi told a “lie after a lie” but is accusing Congress of looting the country whereas he himself rubs shoulders with the rich. “He (Modi) is ‘Jhoothon ka sardar’,” said he. Kharge Ji asked, “Who killed Mahatma Gandhi? … Godse. And who was Godse? He was close to these people….Now they have found love for Gandhiji.”

Kharge Ji added, “They (BJP) are in power (in Gujarat) for the last 27 years but people are still dying of hunger. Most children are malnourished. They have worked to fatten Adani and Ambani, what will they do for children?” he asked.

Ahmedabad: Congress President Shri Mallikarjun Kharge, who was in Ahmedabad on November 28, 2022, said that although the BJP has been ruling Gujarat for the last 27 years, it has not been able to put forward its development works and is only banking on PM Modi for votes.

He said that Congress had sacrificed two Prime Ministers (Indira Gandhi and Rajiv Gandhi) in the fight against terrorism. He questioned whether any leader of the BJP had fought for the freedom of the country.

On BJP’s poll promise of implementing Uniform Civil Code in Gujarat, the Congress leader said it was an attempt to divide society and create controversy for votes.

Modi, his ministers camping in Gujarat as they know people are against them: Mallikarjun Kharge

Behrampura: Addressing a public rally at Behrampura on November 28, 2022, Congress President Shri Mallikarjun Kharge said that in every election, votes are sought in the name of Modi instead of local candidates or the performance of government.

“The BJP believes in telling lies only. I recently said Modi is ‘badshah’ of telling lies, because he keeps on telling lies. What happened to two crore jobs every year? He used to say he will give Rs. 15 lakhs to each citizen after bringing black money from abroad,” Kharge Ji said.

He further claimed that Modi was fond of inaugurating projects which were originally started by the Congress.

Jhalod: Addressing a public rally on November 01, 2022, in Gujarat’s Jhalod, Congress President Shri Mallikarjun Kharge said: “Agar hum sachbatate hain tohunhebura lag jatahai. Aadmi kaammeinkamzorhotahaitoh aur buralagtahai (If we speak the truth, he feels bad. If the person is weak in his work, the sense of hurt is even more).”

Insisting that they intended to convey the “People’s mann ki baat” to the Prime Minister, Kharge Ji recalled: “… A Prime Minister usually goes to one or two places and talks about his plans for the state and the nation. But Modi is wandering in lanes, addressing two meetings in one constituency. If the government has delivered, why such desperation?”

Shri Kharge further said, “….Basic problems haven’t been solved. Atrocities against Dalits and tribals are rising in Gujarat. You only solve the problems of the rich and the powerful. In your government, the wealth of your crony capitalists has soared and the poor have become poorer.”

Bhiloda, Aravalli: Congress President Shri Mallikarjun Kharge on November 02, 2022, said that the Bhartiya Janata Party dispensation in Gujarat was not filling up five lakh posts in government and semi-government departments and institutions because half of them will go to aspirants from Dalit, tribal and other backward caste communities.

Shri Kharge alleged that the BJP-ruled state has seen a 17% rise in cases of atrocities against Dalits and adivasis. On one hand there is inflation and on the other hand unemployment. There is no job for the poor.

The Congress leader said that all pro-people and welfare-oriented laws were framed when his Party was in power. “All these laws were framed by Congress, you (the BJP) did not make any law. You snatch our land, forests and water, but the Congress Party will not let you do this. We will fight to safeguard them,” he said.