Shri Rahul Gandhi in Jammu for a 2-day Visit 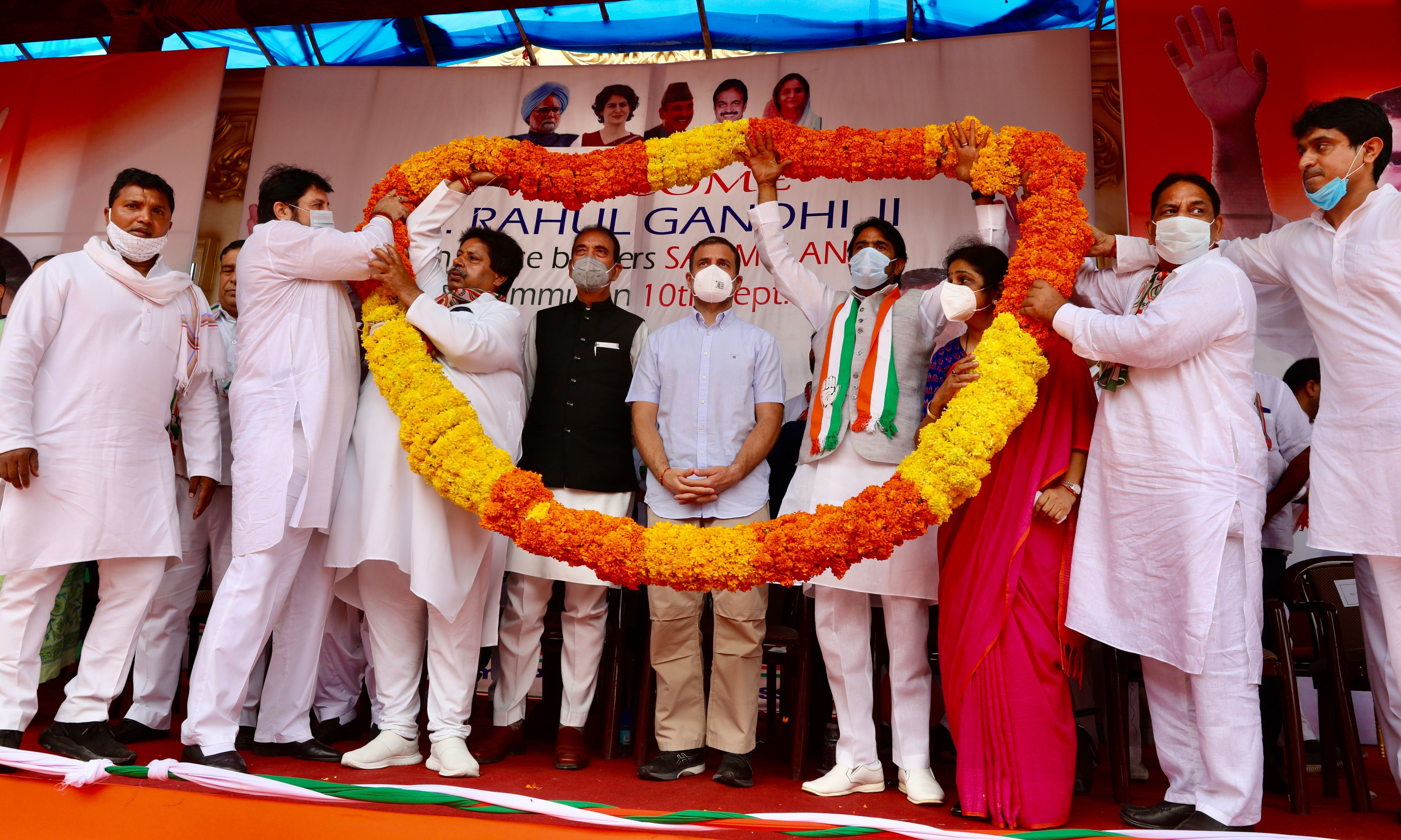 On a two-day visit to Jammu, Congress leader Shri Rahul Gandhi travelled to the Vaishno Devi shrine from Katra on foot on September 09, 2021. The next day on September 10, 2021, he addressed an event in Jammu.

He said, “I feel I have come home. My family has a long relationship with Jammu and Kashmir. I’m a Kashmiri Pandit and my family is Kashmiri Pandit. Today morning, a delegation of Kashmiri Pandits met me. They told me that Congress implemented many welfare schemes for them, but BJP has done nothing”.

“I promise my Kashmiri Pandit brothers that I will do something for them. J&K has a special place in my heart, but I am pained also. There is brotherhood in J&K, but the BJP and the RSS are trying to break the bond of that brotherhood”, he added.

“Yesterday, I went to Mataji’s temple where I saw three symbols - Durga ji’s, Lakshmi ji’sand Saraswatiji’s. Now see who is Durga, whom we refer to as ‘Durga Maa’? The word ‘Durga’ comes from ‘Durg’, right?‘Durga Maa’ means the force that protects us. Why do we worship Lakshmi - Where does the word ‘Lakshmi’ come from? I have come to tell you today. Lakshmi means the force that fulfils one’s lakshya (goal). If your lakshya is money, then whatever you said is correct. If your lakshya is something else, then the power that works to fulfil that lakshya is what we call ‘Lakshmi’. And now comes Saraswati, who too is a Shakti. Saraswatiis Vidya, Gyan or Knowledge as we know it.

So, these are the three forces. And when these three forces oversee (to guard) a house or a country, only then the country progresses. Now tell me, whether the power of Goddess Lakshmi in India got increased or decreased due to demonetization? It got decreased.

Lakshmi’s power got increased or decreased due to GST? It got decreased. Did Durga Mata’s power get increased due to the new farm laws? No, she was harmed instead. She got hurt. When an RSS representative is installed in every institution, in every college, in every school in India, does the power of Saraswati Mata increase or decrease? So, this is what is happening.”

He went on to raise his hand and show his palm to the crowd, when he said, “Hand means daro mat (don’t be afraid). You can see the hand in pictures of Lord Shiva and Wahe Guru.”

Shri Rahul Gandhi then attacked the BJP and said that the party has weakened Jammu and Kashmir. “Your statehood was snatched from you. J&K should get back its statehood.”

He was given a rousing reception at the Jammu airport upon his arrival earlier in the day and Congress members, including top leaders, welcomed him with beats of dholaks.

During his stay, he met party leaders and workers to know about their views on the current situation in Jammu and Kashmir before returning to Delhi.

Earlier on September 9, 2021, Shri Rahul Gandhi paid obeisance at the Mata Vaishnodevi temple. He reached the shrine after undertaking a ‘14-km-long yatra’ on foot through the Trikuta hills. He was seen walking briskly alongside pilgrims on the 14-km stretch leading to the shrine. In some videos, he was also seen interacting with the pilgrims.Congress workers holding up party flags lined the pathway. He also took part in the ‘Aarti’ there in the evening.

“I have come here to offer prayers to the Mata. I don’t want to make any political comments here,” Shri Rahul Gandhi told the reporters who chased him to the shrine. The media was not allowed to take their cameras. He also met the head pujari and the aartipujari at the Bhawan and was blessed by them.

During his trek to the shrine, the former Congress president was flanked by several leaders, including Mir. After spending the night there, he returned to Jammu.