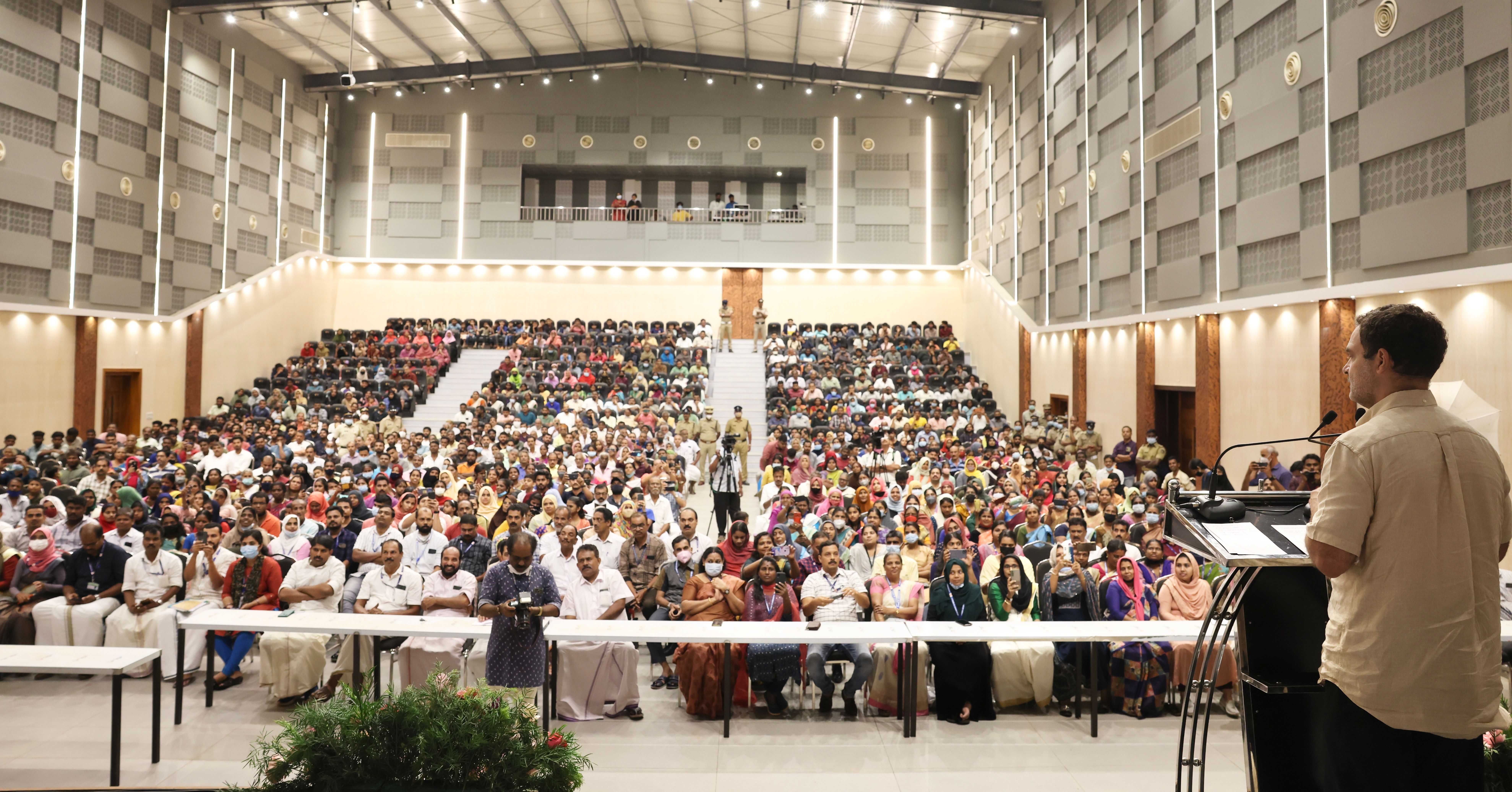 Wayanad, Kerala: Former Congress President Shri Rahul Gandhi on July 1, 2022, visited his office in Wayanad, which was reportedly vandalised by the activists of SFI, the students’ wing of the ruling CPI (M), over the buffer zone issue and termed the act as “irresponsible.” Shri Rahul Gandhi, who is on a three-day visit to his constituency in Wayanad, reached the office along with other senior party leaders and took stock of the damage.

Later, he told reporters that it is the office of the people of Wayanad and what had been done by the Left students’ cadre was “quite an unfortunate thing.” But, he made it clear that violence never resolves problems and he does not harbour any anger or hostility towards them.

“Everywhere in the country, you see the idea that violence will resolve problems. And, violence never resolves problems... It’s not a good thing to do. They acted in an irresponsible way. But, I don’t have any anger or hostility towards them,” he said. Shri Rahul Gandhi also called the SFI activists who indulged in violence as “kids”.

Referring to Friday’s Supreme Court observation that Nupur Sharma, who was suspended as BJP spokesperson over her controversial comments on the Prophet, Shri Rahul said that the atmosphere in the country has been created by the ruling dispensation. “It is not the person who made the comment, it is the Prime Minister, it is the Home Minister, it is BJP and RSS that have created this environment in the country.” The court said Sharma “is single-handedly responsible for what is happening in the country”, while referring to the Udaipur beheading incident.

Launching a scathing attack on the BJP and the Union government, Congress leader Shri Rahul Gandhi said that he wears ED interrogation “like a medal”. He further accused the BJP of “spreading hatred in the country”.

Addressing a gathering in Wayanad, Shri Rahul Gandhi said, “The BJP government and PM are spreading hatred every single day. Our institutions that represent the voice of our people are being attacked and captured by the BJP and RSS. Anybody who stands against the ideology is attacked in the media, by the ED, the CBI and the police. And they think that they can frighten people who do not agree with their ideology.”

“BJP thinks that by interrogating me for five days, asking me the same questions again and again for 55-60 hours, I’ll get worried. There can’t be a bigger joke than this. I was wondering why they interrogated me for just five days? Why not 10 days? I thought maybe I am not opposing them strongly enough,” he said.

“Anyone who opposes the BJP faces ED. I wear my five days of interrogation like a medal. And I am hoping that they do it again,” he added.

The Gandhi scion also slammed the Union government over the economic situation in the country. Look at demonetisation, look at the way they designed GST. It is aimed at destroying MSME and ensuring that two or three big businessmen get the benefits, Shri Rahul Gandhi said.

“They’re also attacking the country’s economic backbone. An India where very few people control all the wealth and millions of people are left with nothing,” he further said.

“Centre won’t use CBI, ED against Kerala CM because BJP and CPI(M) have an understanding,” he added.

MGNREGA played saviour for millions during COVID, but Modi did not acknowledge it: Shri Rahul Gandhi

Congress leader Shri Rahul Gandhi said on July 2, 2022 that the Mahatma Gandhi National Rural Employment Guarantee Act played a saviour for millions of Indians during the time of the COVID-19 but Prime Minister Narendra Modi was not ready to acknowledge the relief and security provided by the UPA government-implemented scheme to the hapless people of the country.

Criticising Mr. Modi for describing the MGNREGA as one of the “living monuments of the failures” of the Congress-led UPA, he said that the PM had not understood the depth of the mass employment scheme and he did know how it has transformed the labour market of the country and how it became the last resort and huge protection for lakhs of people.

“As the economy of the country was crippled due to demonetisation and “faulty” implementation of the GST, the scheme has become even more important now to protect the livelihood of the common people,” the Wayanad MP said.

He was addressing a gathering of MGNREGA volunteers at Nenmeni, a tribal dominated village panchayat, in his Parliamentary constituency Wayanad.

He recalled the huge resistance put up by bureaucrats and others against the MGNREGA when the UPA government brought the scheme claiming that it was going to be a huge loss of money.

“But the idea was to build the country with dignity, use our own people to build the nation’s infrastructure and ensure dignity of labour,” Shri Rahul Gandhi said.

“It was designed to protect our people and in no way it was a tool for charity,” he said, adding that he was shocked to see Modi speak against MGNREGA in Parliament and call it as a living monument of the failures of the UPA government.

Pointing out that the rural employment guarantee scheme was only one part of the solution, he said that the economy of the country and the creation of jobs are the engines of the programme and if they are not working properly, the MGNREGA would become useless.

He also urged the Centre to consider the requests of the people regarding the extension of the MGNREGA work to 200 days, increase their daily wages to ` 400 and expand the scheme to areas like paddy cultivation.