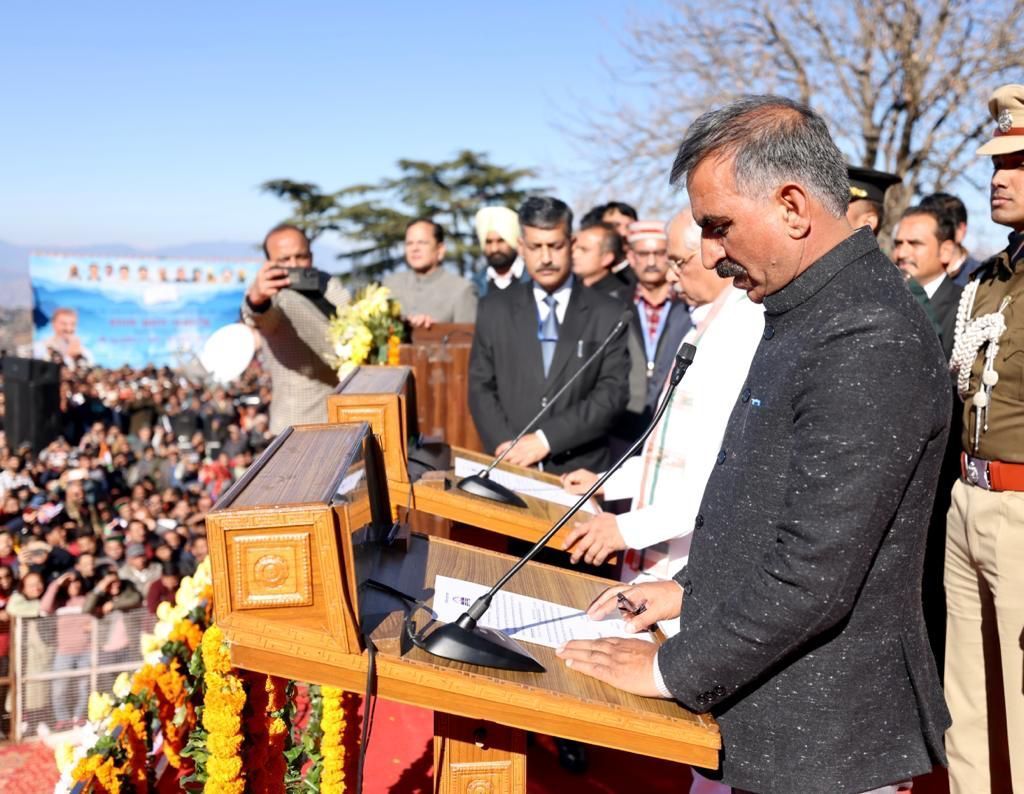 SHIMLA: Shri Sukhvinder Singh Sukhu (58) became the seventh Chief Minister of Himachal Pradesh, the second from Hamirpur, a former Pradesh Congress Committee State President, on December 11, 2022. The leader of the opposition in the 13th Assembly, Shri Mukesh Agnihotri, was sworn in as the Deputy Chief Minister. The ceremony took place in an open space at the historic Ridge in the afternoon on December 11, with senior Congress leaders in attendance such as Congress President Shri Mallikarjun Kharge, former Congress President Shri Rahul Gandhi who took a break from ‘Bharat Jodo Yatra’ to attend the oath ceremony, Smt. Priyanka Gandhi Vadra, Rajasthan Chief Minister Shri Ashok Gehlot and Chhattisgarh Chief Minister Shri Bhupesh Baghel among other senior leaders. He was administered the oath of office and secrecy by Governor Rajendra Vishwanath Arlekar.

Shri Sukhu is a son of HRTC bus driver and is a grassroots politician who has vast organizational experience in the hill state. Shri Sukhvinder Singh Sukhu a four-time MLA from Nadaun, was a former President of Pradesh Congress Committee in the state and has been part of NSUI and Youth Congress.

Shri Sukhu expressed gratitude to the Congress Party and the Gandhi family for giving him this opportunity and stated that he is happy to be the Chief Minister despite coming from an ordinary family.

“I am happy that I am going to be CM despite being from an ordinary family. I am thankful to the Congress Party and the Gandhi family for giving me this opportunity. My mother never stopped me from being in politics. I have reached here today because of her blessings,” said Shri Sukhu.

A journalist turned politician, Shri Mukesh Agnihotri (60), took oath of minister along with Sukhu to become the first ever Deputy Chief Minister of the hill state. Only Sukhu and Agnihotri took oath and the cabinet expansion is likely to take place over the next few days.

There was an air of jubilation on ‘The Ridge’ as people attired in traditional dresses from Kullu and LahaulSpiti performed the nati (pahari dance) to the beating of dhol nagaras. Sukhu’s 85-year-old mother Sansar Devi was also a witness to this special occasion as she came from her native village in Nadaun to attend the oath ceremony.

In the Himachal Pradesh Assembly elections this year, the Congress Party won an absolute majority, securing 40 seats, which is six more than the required number of 34 seats in the 68-member House.