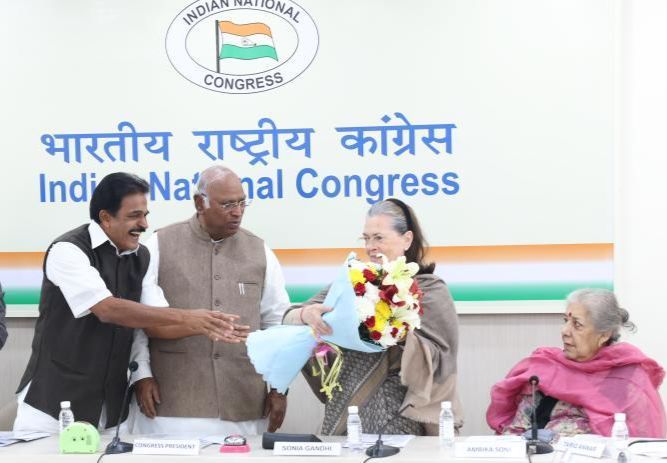 Honourable Smt. Sonia Gandhi and all respected colleagues of the Congress Steering Committee!

I welcome you all to the first meeting of the Steering Committee. I also thank all the comrades of the Indian National Congress all over the country who reposed faith in me for the post of Congress President.

On behalf of all the Congressmen of the country, I would like to especially congratulate and thank Smt. Sonia Gandhi, who has guided the Party and the Country for more than two decades with leadership skills, tireless hard work, and unwavering faith in the basic principles of the Congress. We will be desirous of her immense affection and guidance in future as well.

Friends, before I discuss the challenges facing the country, I would like to talk to you all about the Congress organization and our responsibilities.

I believe that the biggest part of our responsibility towards the Party and the country is ‘Organizational accountability from top to bottom’. It is only when the Congress organization is strong, accountable, lives up to the expectations of the people, we will be able to win elections and serve the people of the country.

I would like the General Secretaries and In-charges of the Party to first ensure their own responsibility and the responsibility of the organization. You should think with your discretion whether the General Secretaries and officials in charge of the provinces visit the provinces under their responsibility for at least 10 days in a month? Have you visited every district, unit and held discussions with Party leaders? Have you tried to find out the local problems? Have all the District Congress and Block Congress Committees been formed? Is your organization fighting for the people according to the ground reality? Have more and more new faces been given a chance at the block and district level? How many units are there where the district and the block have not been changed for five years? How many times have movements happened as per the orders of the All-India Congress Committee on local problems, provincial problems and challenges before the country at the block, district and state level? Are the advance organizations, Party departments and their units raising the voice of those sections for whom they are formed?

What is the outline for the organization and movement on the issues of public interest in the next 30 days to 90 days in your state, for which you are in charge? What is the planning and activity schedule till the elections in the provinces where assembly elections are to be held between today and 2024?

Unless you yourself, your Secretaries, State Congress Presidents, Party MLAs and MPs do not prepare a blueprint for all these and other important things and implement them at the ground level, our responsibility cannot be fulfilled.

While there are very responsible people in the Party who are doing their duty, some have assumed that the lack of responsibility will be ignored. This is neither right nor acceptable. Those who are unable to fulfil their responsibility, they will have to give a chance to new colleagues.

I hope that all of you will prepare a blueprint for the organization and movement and discuss it with me in the next 15 to 30 days. Members of the Congress Steering Committee and other leaders of the Party will also be included in this programme as per the need.

Friends, the ‘Bharat Jodo Yatra’ making a new history in the country under the leadership of Shri Rahul Gandhi, will complete 88 days and enter the border of Rajasthan at night. ‘Bharat Jodo Yatra’ has now taken the form of a national movement. A movement that calls for a decisive war against the back-breaking inflation, horrendous unemployment, intolerable economic and social inequality, and the politics of hatred in the country. Crores of people of the country are associated with the resolve of Shri Rahul Gandhi and the Congress. Among them there are a large number of people who were not associated with the Congress, or used to criticize us. The biggest success of this yatra is that the ‘Bharat Jodo Yatra’ has taken the form of a national mass movement.

The Congressmen of the states from where the yatra has passed have raised their voices with enthusiasm and courage along with the general public. I congratulate them for this.

We have to fight together against all these and against the ruling forces who are sowing the seeds of hatred and division. This is our duty as well as Rashtradharm.

So, let us together fulfil our responsibility towards the Indian National Congress and the country. The agenda regarding the pre-session of the Congress and other things is in front of you. I would request all of you to give your opinion about the future roadmap. Thank You! Jai Hind!

New Delhi: Congress Party held its first steering committee meeting at the AICC Headquarters on December 4, 2022. At the first meeting of the Steering Committee, newly elected Congress President Shri Mallikarjun Kharge warned Party’s office-bearers to leave the post if they are unable to deliver on their responsibilities.

The Steering Committee, a transitional body working in place of the Congress Working Committee (CWC), met at AICC Headquarters in New Delhi. The committee has unanimously resolved that 85th Plenary Session of the Party will be held at Raipur in the second-half of February next year. The new CWC will be elected as per the Party’s Constitution during the plenary.

Basically, we discussed two major issues- one was relating to our plenary session. As per the usual convention, after the Congress President election we have been conducting a plenary session. We decided that there will be a three-day plenary session in second half of February at Raipur, Chhattisgarh.

In that plenary session, we will have a discussion on various subjects and certainly, there will be a subject committee after the plenary session. Finally, big public meeting will also be there.

Number two, we discussed about the review of the ‘Bharat Jodo Yatra’ and the future course of action to follow-up the ‘Bharat Jodo Yatra’. Basically, we decided to hold a massive campaign ‘Hath Se Hath Jodo Abhiyan’ from January 26 onwards. This should be a two-months’ campaign. As per this campaign, Block level Padyatra covering all the Gram Panchayats and Booths and the Party will hand over a letter from Shri Rahul Gandhi; taking out the core message of this yatra. We will also distribute a charge sheet against the Modi Government along with that letter.

There will be village sabhas and flag hoisting during this block level yatra, especially, we will have a separate youth connect in this yatra like bike rallies. This is going to happen throughout the country for 2 months from January 26 onwards. This is a clear follow up of ‘Bharat Jodo Yatra’.

This programme is ‘Hath Se Hath Jodo’ Abhiyan. Basically, it is a three-level programme-Booth level, Village level and Block level padyatras. Number two, district level massive conventions with the workers and state level huge public rallies and one more thing is ‘Mahila March’ in every state capital led by Smt. Priyanka Gandhi also will be there as part of this programme from January 26 to March 26, two months.

We should have massive padyatras throughout grass roots level, block level and village level. Village level main thing will be there and after that, district level massive workers, karyakartas’ convention will be there, state level huge rallies, which will be participated by Hon’ble Congress President and other senior leaders. This is what we decided to follow up the ‘Bharat Jodo Yatra’.

The Committee unanimously resolved that the 85th Plenary Session of the Indian National Congress will be held at Raipur in the second half of February 2023.

The Committee noted the overwhelming success of the ‘Bharat Jodo Yatra’ and the wide participation of lakhs of people. The Yatra listens to and speaks with people from all sections of society every day, especially youth, women, farmers and the working class, directly communicating its message of equality, fraternity and harmony. It is the same message which India’s spiritual leaders and social reformers preached, the leaders of our freedom struggle under Mahatma Gandhi fought for, and our Constitution upholds.

The Committee particularly appreciated the leadership of former President Shri Rahul Gandhi, whose tapasya, unfailing determination, and love for India and her people have been critical to the success of the Yatra. The Committee expressed its thanks to leaders and karyakartas of the Indian National Congress across the country for their hard work in supporting the Yatra, as well as to the lakhs of Indians who have participated in it.

The Committee noted with concern the grave economic, social and political challenges that India continues to face. These challenges intensify every day. Crores of people struggle with soaring prices (increasing at nearly 7%) and record unemployment (8%), even as the Government allows the concentration of the nation’s wealth in a few chosen hands. Economic growth continues to slide with every passing year. The deliberate subversion of, and attack on Constitutional institutions continue. The pre-meditated attempt that is underway to de-legitimize the judiciary and orchestrate a confrontation between the executive and the judiciary is particularly alarming. The Government continues its silence on Chinese incursions on the border and the change in status quo on the LAC, even as credible reports indicate increased deployment of Chinese troops and weaponry.

As India faces these challenges, the Prime Minister continues to deny, distract and divide. His inflammatory rhetoric during the recent election campaigns in Gujarat and Himachal Pradesh has further polarized the polity and society at a time when serious discussion and debate are needed.

General Secretary (Communication) Jairam Ramesh, particularly pointed out Steering Committee’s statement emphasising on ‘Unity’. “The Indian National Congress has a critical role to play in finding solutions to these challenges. The Steering Committee calls upon every Congressman and Congresswoman to work with unity, faith, determination, and a sense of collective purpose. The victory of the Party will be the victory of every leader and karyakarta and a victory for the idea of India that guided our freedom movement and is enshrined in our Constitution,” the statement notes.