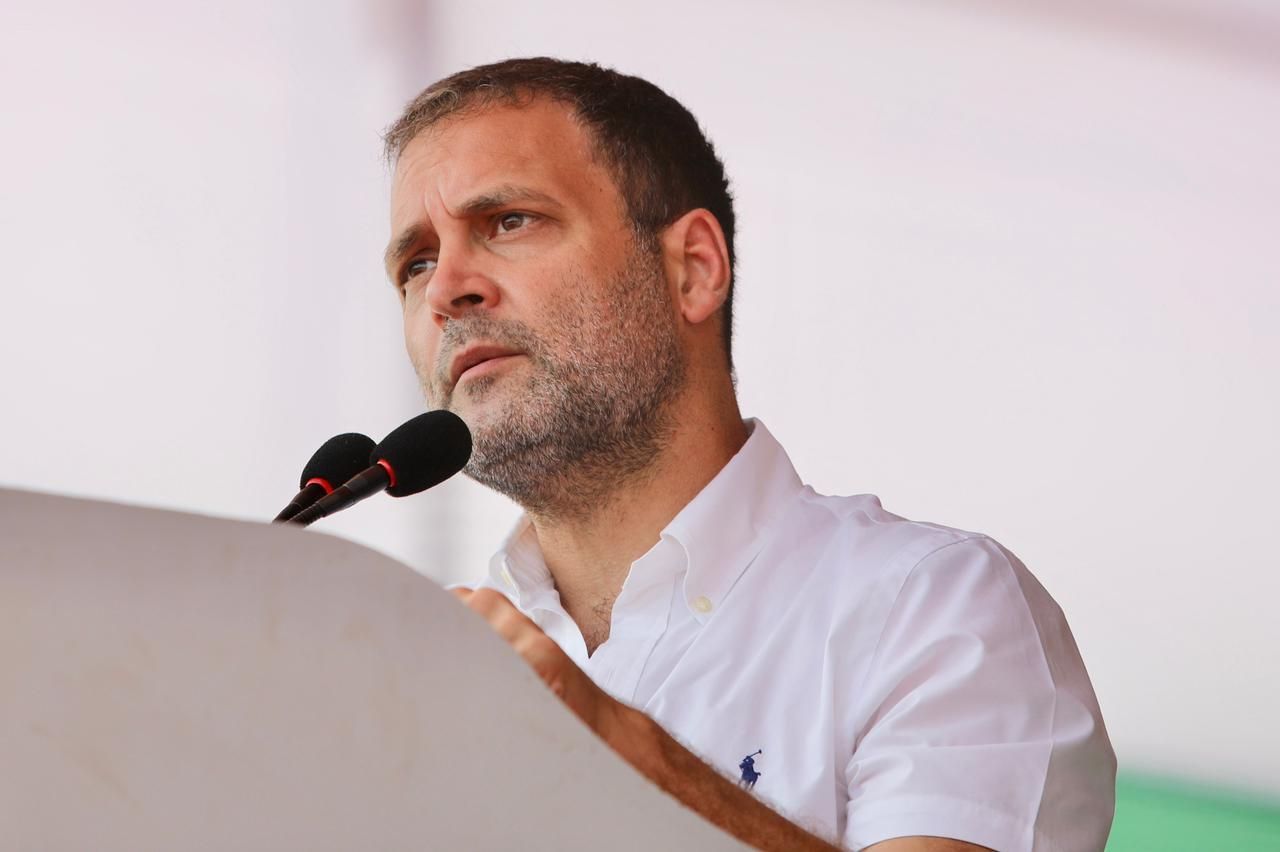 Taking aim directly at Prime Minister Narendra Modi, Congress leader Shri Rahul Gandhi on 27thFebruary, while campaigning in Tamil Nadu’s Thoothukudi, accused the PM of being “scared” of China and working for the interests of the privileged few in the country.

Speaking to lawyers at a college in Thoothukudi, Shri Rahul Gandhi said, “Question isn’t whether PM is useful or useless. The question is who is he useful to? PM Modi is extremely useful to two people i.e., ‘hum do, humare do’, who are using him to increase their wealth, and useless to the poor.”

Launching his three-day tour of Tamil Nadu ahead of Assembly elections on 6 April, Shri Gandhi added in his address that PM Modi allowed Chinese forces to “test the idea” in Doklam in 2017 and that his first reaction to the Chinese incursions was that “nobody has come into India.”

He added that the government under Congress “always dealt with the Chinese without any hesitation.”

“The Chinese understood very well that India cannot be pushed around. Even in 2013, when the Chinese entered into India, we took action that forced them to compromise... we went and occupied other spaces,” he said.

Responding to a question on the fall of the Congress government in Puducherry, while speaking at VOC College in Tamil Nadu’s Thoothukudi, he said that Congress was given the mandate in Puducherry, Madhya Pradesh, and he is also aware of how much money was “thrown” by the BJP government to buy MLAs, in order to overthrow the elected government.

Shri Rahul Gandhi is on a three-day tour of Tamil Nadu where Assembly elections are scheduled to be held on 6 April.

“Choosing the right MLA candidate is one component of the problem. If you look at Madhya Pradesh, Goa, Jharkhand, Puducherry, Arunachal Pradesh, people gave the mandate to Congress. But concentration of capital took that away from us,” he said.

”When you have one party fighting elections with thousands of crores while other parties are not allowed to raise money and even seek help from people who want to support them. There are many who want to support us opposition parties but if they do so, their businesses will be destroyed,” he added.

He compared today’s political scenario to India’s struggle for Independence and said, “We need a judiciary that isn’t penetrated by the RSS.”

“We have seen cases of judges giving verdicts in favour of governments. There should be a cooling-off period (after justices’ retirement),” he added.

Former Congress President Shri Rahul Gandhi attacked the BJP government in Thoothukudi saying that there has been a systematic attack on elected institutions and free press in the last six years. “A nation is balanced between its institutions. If the balance is disturbed, the nation is disturbed. That is the central idea….Over the last 6 years, there has been a systematic attack on elected institutions and the free press that hold the nation together. Democracy doesn’t die with a bang, it dies slowly. I am sad to tell you that democracy in India is dead, it does not exist. The concentration of capital has combined with the RSS to destroy the institutional balance in the country,” alleged Shri Rahul Gandhi while interacting with lawyers at VOC College.

During the interaction, Shri Rahul Gandhi termed the CAA discriminatory on many counts. He also said that Congress is opposed to farm laws and is fighting against them. Replying to a question, Shri Rahul said,” India is entering a phase very much like the British era. We cannot rely on the institutions to protect our democracy anymore. We can only rely on the people of the country.”

He also extended his support to women reservation issues. “I am in full support of women reservation in the Judiciary as well as in Parliament. In every space, Indian men need to view the Indian women with the same lens they view themselves,” said Shri Rahul Gandhi.

Replying to a question, he said that there has been a full-scale attack on secularism in India by the present government. “There is a full-scale attack on the secularism in the country. The RSS and BJP are leading this attack. Secularism is the foundation of our culture and history. If you go back into time, this country has always been a sensitive, compassionate country that embraces different types of idea. So this attack is not just on our constitution but also our history.” Congress leader Shri Rahul Gandhi urged everyone to fight this assault.

Shri Rahul Gandhi also pointed out that there has to be transparency during the voting process as well to ensure a smooth election. “Whenever the Congress has said show us EVMs, let us do random checks on machines, we are told you can’t do. I would be comfortable with EVMs if I could see it was open to checking, transparent, accessible to political parties,” he said.

TIRNELVELI (TN): Congress leader Shri Rahul Gandhi on 28th February described Prime Minister Narendra Modi a “formidable enemy” who ‘crushed’ his opponents and vowed to send him to political oblivion by following the path of love and non-violence.

During an interaction titled ‘Educators Meet’ at the St. Xavier College here, Shri Rahul Gandhi, touring southern Tamil Nadu for the second day as part of his second leg of campaign for the April 6 assembly polls, also said that he counted on the people’s support to defeat the BJP.

When a participant wanted to know if Gandhi felt it was possible to nudge the Modi government to implement his ‘good ideas’ rather than waiting to assume power which seemed ‘Utopian’, he said that it could be done with the ‘powerful’ and ‘valuable’ support of the people.

It was important to dream big, though some of it may not come true, he said in an obvious reference to snatching the reins of power from the BJP at the Centre.

Recalling the country’s independence movement, he said that the Britishers were much more powerful than Modi would ever be.

The Congress leader, replying to another participant, alleged that the BJP-led Centre claimed to “represent Hinduism” in several ideas they espoused, but, in reality it had nothing to do with that faith.

Hinduism does not preach insulting, killing or beating up people, Shri Gandhi asserted, alleging “but they do it.”

The essence of all religions was love but the Central government’s ‘whole game’ is to ‘steal’ money of ordinary people, including farmers through initiatives like farm laws, and give it away to the biggest businesses in the country, he alleged.

In response to another question, he said that he did not like the Centre’s New Education Policy, 2020 either.

When a professor alleged the NEP was agenda driven, Shri Rahul Gandhi said that any policy on education should be an outcome of deliberations with learners and teachers.

“Unfortunately, this was not done,” he claimed, adding, it concentrated too much power in the hands of the Centre and it was set to damage the education system.

Though NEP had a positive aspect of flexibility, it was however, a “weapon to communalise, to push a particular ideology into the Indian system and that is why I do not like it.”

He batted for more scholarship so that more and more poor students got education and underscored women empowerment.

To a demand on bringing back education to the state list of the Constitution from the concurrent category, he said, “I don’t know we will look into it.”

Centralising everything was a bad idea and decentralisation and facilitating access to education from all corners of the country were fundamental, he said.

In 1976, the then Congress government led by Prime Minister Indira Gandhi shifted education, which was previously a state subject, to the concurrent list allowing Centre to legislate on the matter besides the states.

Earlier, Shri Rahul Gandhi offered prayers at the ancient Shiva shrine of Lord Nellaiappar temple, where he was accorded the traditional temple honours.

Tamil Nadu should show the way to India in keeping out BJP: Rahul Gandhi

Nagercoil,(TN): Tamil Nadu should show the way to India in keeping away the forces that are inimical to language and culture and those projecting “one culture, one nation and one history” concept, Congress leader Shri Rahul Gandhi said on 1st March,2021.

History has shown that nobody can rule Tamil Nadu other than the Tamil people, he said during a public address.

“This election will show the same thing that only a person who truly represents the Tamil people can be a chief minister of Tamil Nadu,” he said addressing the huge crowd in Nagercoil, in the southern Kanyakumari district.

“Tamil Nadu chief minister (K Palaniswami) who bows to Prime Minister Narendra Modi will never be able to do this. The chief minister should bow to the people of the state,” he said. The RSS and Modi “insult Tamil language and culture”, he said, adding the people should not to allow them to gain a foothold.

“We have a chief minister here who submits to everything that Modi says. The chief minister represents what Modi wants to do but not the people of Tamil Nadu,” he charged. Recalling the yeoman service of Congress senior and late parliamentarian H Vasantha Kumar, Shri Gandhi said that he always stood by the party values.

The Congress leader also recalled former Tamil Nadu Chief Minister Kumaraswami Kamaraj for his leadership. He said that when it came to implementing the mid-day meal in the state, Kamaraj did not care about the opinion of the economists that it would be a bad idea but only listened to the people and brought in the scheme.

He said that the Congress wants a government in Tamil Nadu that looks after the interests of farmers, small businesses and labourers.