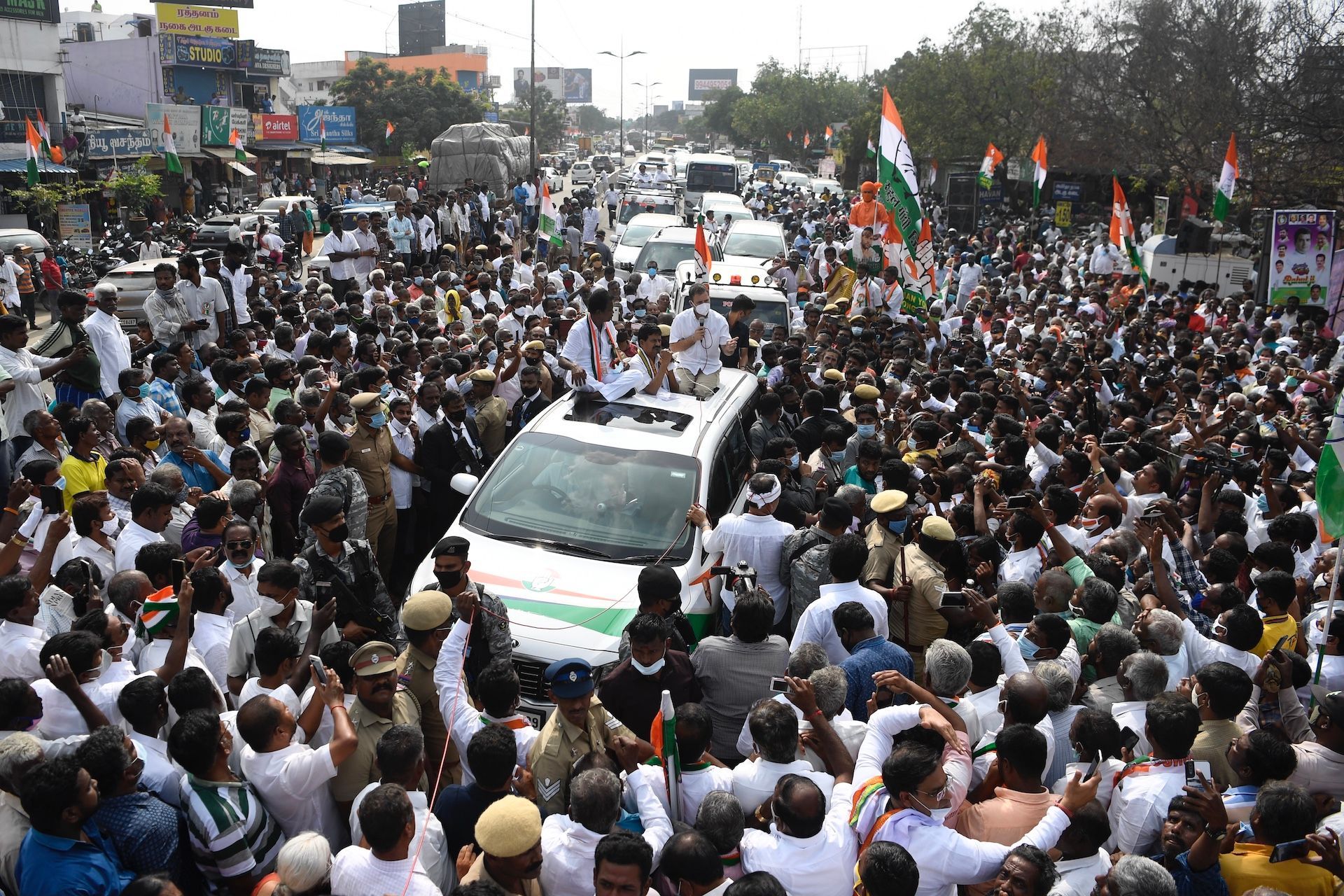 Congress leader Shri Rahul Gandhi kickstarted his three-day visit to Tamil Nadu on 23rd January, 2021, ahead of the forthcoming assembly polls, which are slated to take place between April and May this year. This is the second time that the former Congress President has visited the state this month. Addressing people in Coimbatore, Shri Rahul Gandhi said that he wanted to help people rebuild Tamil Nadu and make the state an example of excellence. “You’d a loving relationship with my grandmother, I’m indebted to you. You’ve given me so much love. That’s the spirit with which I’ve come here. I want to help you once again build Tamil Nadu. I want world to look towards Tamil Nadu and say that’s example of excellence,” said Shri Rahul Gandhi.

He also promised to protect and defend Tamil Nadu’s unique culture from attacks by the BJP-led Central government. “Ruling party believes that for sake of efficiency of growth, diverse factors need to be homogenised. We don’t believe in that. We believe that if Tamil Nadu is India then India is Tamil Nadu too. I respect Tamil language & maybe will learn it. Vannakam!” he said.

Congress leader Shri Rahul Gandhi also held a roadshow in Coimbatore on his way to the venue of meeting with MSME representatives. He also expressed his solidarity with the Tamil people and their interests during the roadshow.

While interacting with MSME representatives, Shri Rahul Gandhi said that the Central government doesn’t support small industries and questioned whether anyone has seen PM Modi standing with MSME leaders ever! He accused that the BJP government has no strategy and vision for the country. Shri Rahul Gandhi said that if UPA is voted back to power, it will restructure the GST and reform farm laws.

Not ‘Knickerwalas’ from Nagpur, Tamil Nadu’s Youth will Decide the Future of the State: Rahul Gandhi

Congress leader Shri Rahul Gandhi turned up the heat ahead of Assembly elections in Tamil Nadu on 24th January,2021. The former party President and sitting Lok Sabha MP from Kerala’s Wayanad took part in roadshows at Poondurai, Perundurai and Uthukuli in Tamil Nadu’s Erode district and had lunch with weavers at Odanilai before addressing an election campaign event at Dharapuram in Tiruppur district.

While addressing the public meeting in Dharapuram, Shri Rahul Gandhi took aim at PM Modi and the RSS. He said, “Knickerwallahs from Nagpur can never ever decide future of the state. Doesn’t matter how many parades they have. Tamil Nadu’s future will be decided by the youngsters of Tamil Nadu.”

“We will not allow Narendra Modi to destroy the foundation of India. He has also got another confusion- he thinks that just because he can blackmail the government of Tamil Nadu, he can control the people of Tamil Nadu. He does not understand that only the Tamil people can decide on the future of Tamil Nadu,” Shri Rahul Gandhi went on to say.

While alleging that the Chinese would never have the ‘Guts’ to encroach on Indian land if India’s economy had been strong, Shri Rahul Gandhi said, “For the first time, the Indian people can see that Chinese troops have occupied Indian territory. As we speak today, thousands of Chinese troops are occupying our territory and the man with a 56-inch chest cannot even say the word ‘China’. That is the reality of our country.”

The Congress leader went on to reiterate his charge that the Prime Minister works only for “five or six businessmen friends” and not for the people.

At the public meeting in Dharapuram on 24th January, 2021, Shri Rahul Gandhi said that he wanted to be a ‘Soldier of the Tamil people’ in Delhi and claimed that he would not allow the BJP to ‘disregard Tamil culture’. My ties with Tamil Nadu are bonded by “love, affection and blood,” he added.

“I understand, accept and respect the Tamil spirit and culture. I am not going to allow the Prime Minister and the BJP to disrespect the Tamil people no matter what,” he said in English. The speech was being translated into Tamil at the time.

During his roadshows, the Congress MP accused the BJP of trying to relegate Tamil Nadu to a ‘Second Class Place’ by imposing one culture and one language.

Among key issues, Shri Rahul Gandhi invoked during his speech, were the ongoing farmers’ agitation, demonetization and GST which he referred to as a “Nonsensical Goods and Services Tax”.

“Today, we have a Prime Minister who is trying to build a roof by destroying the foundation and the walls of the building. People around him are too scared to tell him about his own ignorance. Scared to tell him you cannot construct a building without a strong foundation,” Shri Rahul Gandhi alleged.

“If India’s labourers, farmers and weavers were strong, protected and given opportunities, China would never dare to come inside India,” Shri Gandhi said in Tamil Nadu’s Erode.

“You (the government) are using the Indian army, navy and air force to protect India from China. If you use India’s labourers, farmers and workers, you will not need the army, air force and navy to be standing over there. China will not have the guts to come inside,” he added.

Shri Rahul Gandhi has been spearheading Congress’ attack on the government since the skirmish in Ladakh’s Galwan Valley in June last year in which 20 Indian soldiers were killed. He and his party have been questioning the government over its claim that China did not occupy or intrude into India.

KARUR: Amid fissures in the DMK-Congress alliance in Puducherry, scion of the grand old party, Shri Rahul Gandhi on 25th January, 2021, affirmed that the Congress had a strong relationship with the Dravidian major.

“We have a good relationship with the DMK, and we accept (DMK President) MK Stalin as the CM candidate,” Shri Gandhi said while campaigning in Karur. “We have a lot of respect for (late DMK patriarch) Mr Karunanidhi and we have the same respect for Stalin Ji. We have full faith in our alliance,” he said. Earlier, Stalin had also said that the two parties would contest the 2021 Assembly elections together.

“Currently, there is an ideological war going on in our country. Modi believes that India should possess only one language, one culture and one idea throughout the country. What will happen to Tamil people’s culture, tradition and language?” Shri Gandhi asked. “The aim of our alliance is to stop the RSS ideology from entering Tamil Nadu,” he said.

Alleging misuse of power by the NDA government through the CBI, Income Tax Department (IT) and Enforcement Directorate (ED) in states ruled by opposition parties, Shri Gandhi asked why there was no action taken against the Tamil Nadu government and its rulers? “Modi thinks he can control the people of Tamil Nadu like he controls the Tamil Nadu government using a remote control. But, in reality, the people of Tamil Nadu are going to throw away the batteries of the remote control in the upcoming election,” he claimed.

The Congress leader said that the Tamil people had shown great love and support to his family. “I have a great responsibility, as the people have shown immense love, support and faith in me. I will always stand by their side to protect their culture, tradition and beliefs. Until my last breath, I will have huge respect towards Tamil Nadu and its people and will be its saviour till the end,” he vowed.

Shri Gandhi, who visited Karur after touring the western districts of Tamil Nadu and meeting with entrepreneurs and industrialists, addressed a farmers’ convention in the district.

Over a thousand farmers from in and around the district participated in the convention at which the leader took part in a question and answer session and listened to the problems of farmers. Mounting a strong attack on the NDA government, he criticized the new farm laws and the ‘Draconian’ policies implemented by the Centre.

Addressing reporters in Pallapatti at Aravakurichi, Shri Gandhi referred to WhatsApp chat transcripts of journalist Arnab Goswami and termed it as “High Treason” that Goswami was aware of the Balakot airstrikes before they happened.

Alleging that prior information on India’s air strikes in Balakot in Pakistan in 2019 was ‘leaked’ to Republic TV editor-in-chief Arnab Goswami and sought to blame Prime Minister Narendra Modi for it. Shri Rahul Gandhi said, “It was also a ‘breach’ of the Official Secrets Act.”

“Only five people including the PM and the Defence Minister would have prior information of the planned strikes. Some days back it came out that a journalist knew about the air strikes in Balakot. Three days before the (Indian) air force bombed Pakistan, an Indian journalist was told it was going to happen,” he said in his public address in the state’s Karur district.

Earlier, he went on a ride in a double bullock cart, driven by Karur MP Jothimani, and took some selfies with members of the public.

New Delhi: Keeping up the attack on the NDA government at the Centre over the new farm laws, Congress leader Shri Rahul Gandhi, who is on a three-day visit to poll-bound Tamil Nadu, said that they were “Criminal” and vowed to oppose them in the interest of the farmers. The laws were aimed at benefitting “5-6 people closest” to Prime Minister Narendra Modi, he said, adding that Modi wanted the farmers to negotiate with “huge corporate” rather than the farmers going to mandis or negotiating with small traders.

“The result is going to be that millions of people who are employed by this agriculture system–farmers, labourers, loaders, small traders–all these people are going to be unemployed,” he claimed.

Referring to the protesting farmers from Punjab and Haryana, Shri Rahul Gandhi said, “The Prime Minister is calling them terrorists. So, we are stopping these laws and protecting your interests. These are criminal laws against the farmers of India...they are trying to replicate a failed model.”

Lashing out at the RSS, he said that its ideology was “Anti-Tamil” which is “aimed at weakening the spirit of Tamil people and we will never allow it to happen.”