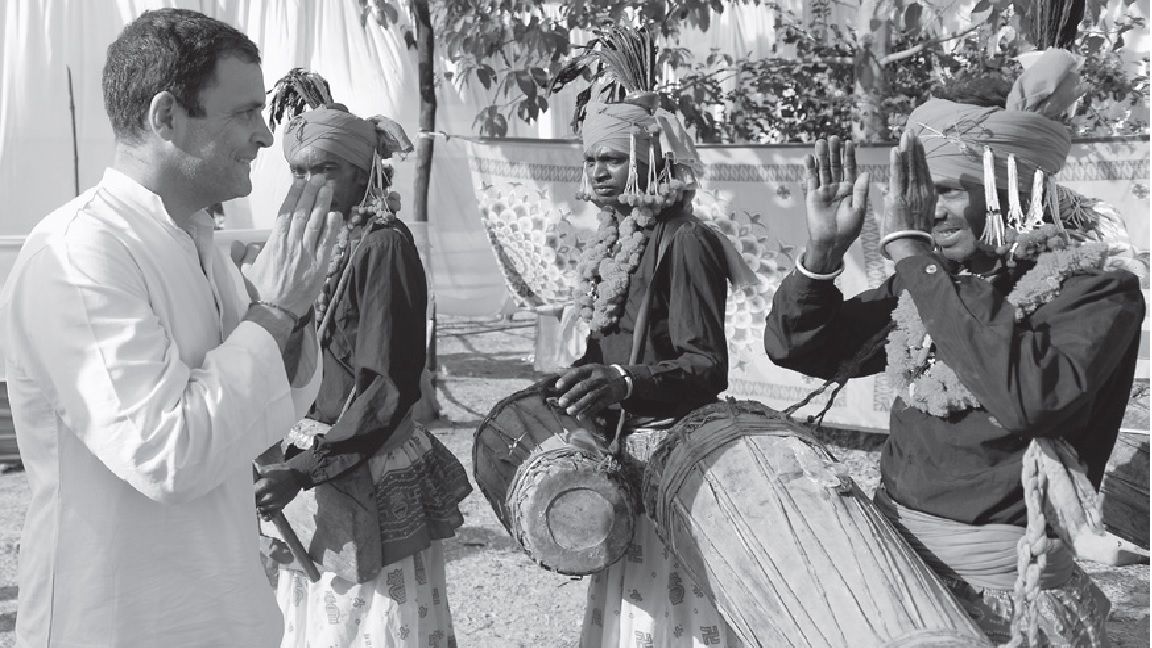 Addressing a public meeting after the road show, Shri Rahul Gandhi criticised Prime Minister Narendra Modi over the Rafale fighter jet deal and a sudden demonetisation of a bulk of the currency in circulation in November 2016, and said he no longer talks about corruption.

Congress President, after landing at PTS helipad in Rajnandgaon town in the evening, hopped on an SUV with an open roof for his road show. He was followed by a cavalcade of large numbers of Congress leaders.

After passing through Gurdwara Chowk, Manav Mandir Chowk and Azad Chowk - covering a distance of around 2 km, the road show culminated with a public meeting at Ganj Chowk.

Targeting the prime minister, Shri Rahul Gandhi said PM Modi did not fulfil the promises he made to people ahead of the 2014 election. “Neither Rs. 15 lakh was deposited in bank accounts of people nor two crore youths got employment during the four-and-a-half year rule of the Modi government. The Modi government made people stand in queues during demonetisation,” he said.

Instead, the common men had to bear the brunt of steps like demonetisation and Goods and Services Tax, he said.

“PM Modi earlier used to speak about corruption, but he does not do so now. The Modi government has committed scam to the tune of crores in the Rafale fighter jet deal. PM Modi benefited his close ones in the Rafale deal,” Shri Rahul Gandhi alleged.

The Congress President sought to know why loans of farmers are not being waived. “If PM Modi can waive loans to the tune of Rs. 3.50 lakh crore of industrialists then why not of farmers,” he asked.

PM Modi has divided the country into two different ‘Hindustan’ - one where people travel in airplanes, while the other is inhabited by the poor, farmers and labourers, Shri Gandhi said.

Referring to the GST, he said if the Congress comes to power at the Centre, people will get relief from “Gabbar Singh Tax”.

Later, Mr Gandhi went to Post Office Chowk where he garlanded the statue of Congress leader Udaya Mudliyar, who was killed in the Jhiram Valley Naxal attack in 2013.

Congress President on Friday held a road show in Rajnandgaon town and addressed three poll rallies in Pakhanjore (Kanker district), Khairagarh and Dongargarh (Rajnandgaon district) for the first phase of polls on November 12.