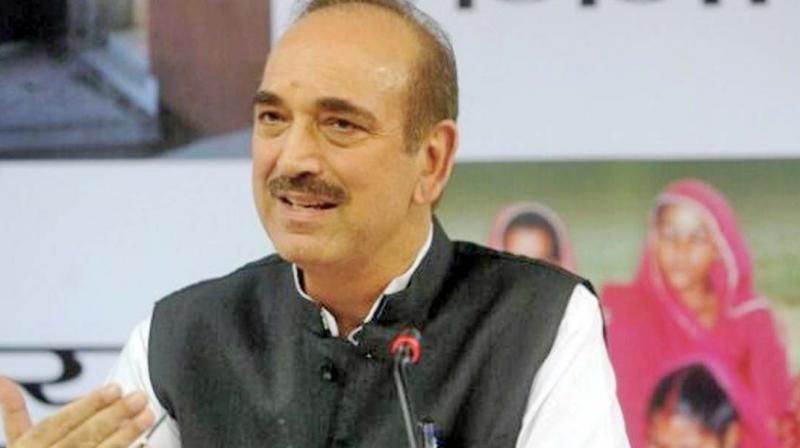 Shri Ghulam Nabi Azad said that the Prime Minister’s reply to the Motion of Thanks to the President’s Address, said that it was very disappointing and which did not contain anything to remember or to quote. The real issue that we had raised on the welfare of the farmers in the President’s Address and sought a reply from the Prime Minister on the suicides by farmers and the biggest reason being their loans because of which they commit suicides and what will the government do. When our UPA government led by Smt. Sonia Gandhi and Dr. Manmohan Singh was the Prime Minister, we had waived off the Rs. 70 thousand crores loan of the farmers and the Prime Minister has made no reference of it.

I had raised a big issue about the Smart Cities. This government on its coming had said of making 100 smart cities and this was also mentioned in the President’s Address but ill date they have only identified 20 smart cities, they had taken two years to identify these 20 smart cities out of the 100.

We had raised the issue of Black Money, he did not say anything about it. The President’s Address mentioned about the Streamlining of Defence Procurement Procedure, I had said in details that when our government was there we had talked of buying 126 Rafel jets from France and the big issue was about transfer of technology. Out of 126, 18 jets would be complete and HAL would make 108 in India and if they would have agreed upon the clauses put by the UPA government, then these 108 jet would have be manufactured by the HAL. Our name would have been all over the world and we would have said that it was transfer of technology and it was ‘Make in India’. But when the BJP government came it canceled the deal of purchasing 126 Rafel jets from France and said that we would purchase 36 jets in complete form.

Shri Jairam Ramesh said the Congress President also yesterday had raised the issue of Amendment as explained by LoP Rajya Sabha and he wanted to clarify that in Haryana and Rajasthan, the State Assembly has passed a Law for minimum Educational Qualification for contesting Panchayat and Nagar Palika Election. The Haryana Law has been upheld by the Hon’ble Supreme Court. Rajasthan Law is subjudice. A number of organizations has petitioned the Hon’ble Supreme Court for reviewing the Haryana decision.