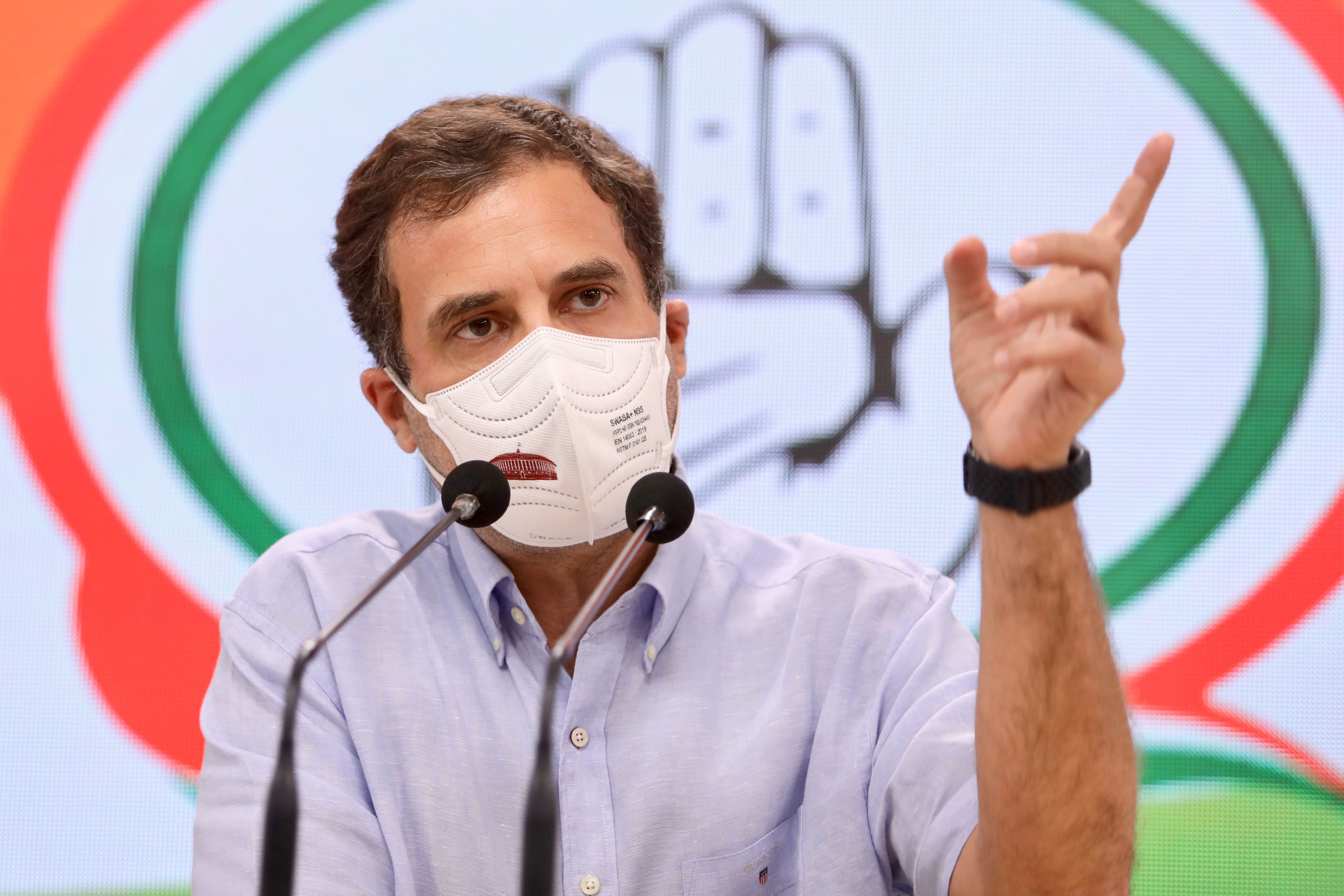 Addressing the journalists, Shri Randeep Singh Surjewala said that respected Shri Rahul Gandhi ji and all of you are welcome in today’s special press conference. Today, when the country is being overburdened with inflation, when the budget of a housewife of the country has gone haywire, in such a situation, respected Rahul Gandhi ji is present amidst you with some important issues. I would urge him to speak directly to you.

Shri Rahul Gandhi said Namaskar. Thank you for coming here today. Today I want to talk to you, the people of the country, about the general price rise and about the rising prices of petrol, diesel and gas. Broadly, the Government has a new concept of GDP. New concept is- an increase in GDP means- an increase in Gas, Diesel and Petrol Prices. Over the last 7 years, they have earned Rs. 23 lakh crores from increase in Diesel, Petrol and LPG Gas. Every single person is affected by this.

In 2014, when we left office, LPG Gas price was Rs. 410 per cylinder, today it is at Rs. 885 per cylinder, that is 116 percent increase. Petrol was Rs. 71.51; it is now Rs. 101.34, 42 percent increase. Diesel was Rs. 57.28, now, it is Rs. 88.77, a 55 percent increase and the interesting thing is, people could argue that prices are rising, LPG Gas, Diesel, Petrol prices are rising, because international prices are rising. But that is not the case, because Crude Oil prices were at 105 US Dollars per Barrel, when we were in power in 2014, and today it is 71 US Dollars, that is a decrease of 32 per cent. International Gas prices were at 880 US Dollars per metric tonnes, today they are 653 USD per metric tonnes, that is a 26 per cent drop. For the last 7 years, we have seen a new economic paradigm. Demonetization on the one hand, monetization on the other. This (showing a paper said Shri Rahul Gandhi) that Modi ji had earlier said that he was doing demonetization and the Finance-Minister keeps saying, I am doing monetization. So, the public is asking as to whom does monetization belong and to whom does belong the demonetization? So, the interesting thing is, there is demonetization taking place, where the farmers, laborers, small traders, MSMEs, contract workers, salaried class, honest industrialists are being hit and on the other side, there is dramatic monetization taking place. They are 3 or 4 big industrialist friends of the Prime Minister, who are being benefited. There is a transfer of wealth taking place from the poor, from the weak to the Prime Minister’s friends. That is what is going on and that is what I wanted to raise today, and I wanted the young people of this country to think about this. This is about your future. You have to ask the question. Who is this money going to? Rs. 23 lakh crores have been taken out of your pockets; out of the pockets of farmers, laborers, poor people, and question is where are they going? At the same time, we see the Finance-Minister talking about monetization, where your assets, the assets of this country are basically being given away at cut-rate prices again to the 3 or 4 of the Prime Minister’s favourite people. So, that is what I wanted to raise today.

Gas prices, diesel prices, petrol prices, oil prices are falling in the international market but are increasing in India. On the other hand, the assets we have are being sold. The government has earned Rs. 23 lakh crore from GDP. GDP here does not mean the Gross Domestic Product, GDP means Gas, Diesel, Petrol. My question is where did this 23 lakh crore rupees go? Demonetization is being done, through GST money is being snatched from your pockets. The three laws that have come up for farmers is an attempt to snatch your money away. So where is this money going? It is not coming to you. It is not going into your pocket.

On a question that you raise the issue in the Parliament, you are doing a press conference even here, do you think the public, which is affected, is also with you and if it is not coming forward, then why? Shri Rahul Gandhi said that look, it is clear that anger is getting developed there. But on the other hand, that voice is also being suppressed systematically. It is the time of Corona, so even we do not want lakhs of people to come out on the road. Because we know it can have other consequences. So, even we are practising a little restraint. But there is tremendous anger steaming among the public. You know how the media is being attacked. They do not let you speak or write whatever you want to. Institutions are under pressure. We are not allowed to talk or discuss in the Parliament, so this is the scenario. But this anger will keep on brewing and then the reaction will be tremendous.

In response to another question regarding the Indian economy, Shri Rahul Gandhi said that the situation today is somewhat similar to the one which was in 1991. The problem that exists today is not a cyclical problem, it is a structural problem. Let me repeat it - it’s not a cyclical problem, it’s a structural problem. What does it mean - without changing the direction, without changing the vision, one cannot come out of it. The problem is that the economic strategy that we followed from 1991 to 2012 is no longer working. We accept that our strategy, which lasted from 1991 to 2012, stopped working in 2012. We meant to say that a new approach is needed.

A new approach is needed and without a new approach, things will not be set right. Narendra Modi Ji had promised to bring a new approach. All these people keep talking about the New India. But that is not a new approach, it is hollow. He talked about Make-in-India. Is something being made in India? He talked about demonetization. Is there any benefit? Now he is talking about monetization. So, people will have to understand that now a new vision is needed. It won’t work without it. Whatever you speak, no matter how many speeches you give, nothing will work now.

We had a catastrophic failure in 1990 and after that the Congress gave a new vision to the country. It was said that a catastrophic failure is there, and now a new approach is needed. The Prime Minister should talk of a new approach, but he is not doing so. We know what to do. It is very clear in our mind, in the mind of the Congress party, the experts we have, it is very clear in our mind, what to do. We know what the new approach is, how to proceed. So, the Finance-Minister is not getting this thing. But even their Think-Tank, the NITI Aayog, or the Prime Minister will not understand the matter. But there are experts who will understand this and the Finance Minister, the Prime Minister should talk to those experts. If they don’t want to do that, there are experts of the Congress party whom we can send. We’ll explain. We have the experience to do what needs to be done. So, I say this is a Catastrophic Failure. And the Collapse of GDP is its symptom. You see, the stock market of India is growing rapidly. This entire stock market is a façade of 50 companies only. Look at what is happening to the remaining 300, 400 or 500 companies in the stock market. They are ending one after the other. But they are the future. If you want to increase the economic base of India, then the future is those which are in second line, third line or fourth line. They are all coming to an end. And the work that is being done, is the work of strengthening just the 5, 6 or 7 people. These people cannot give employment to India. Who gives employment to India – the Small-medium businesses, the people in the second line and the people in the third line or fourth line do so. Modi Ji doesn’t even give a thought to them.

On a question that inflation is increasing since last seven years, but is Congress not able to make it an issue during elections? Do you think people are not affected by inflation? Shri Rahul Gandhi said that I have given you the answer earlier. Institutional capture, gagging of the press, not allowing the true voice to come out, threats, intimidation, violence. Thank You!