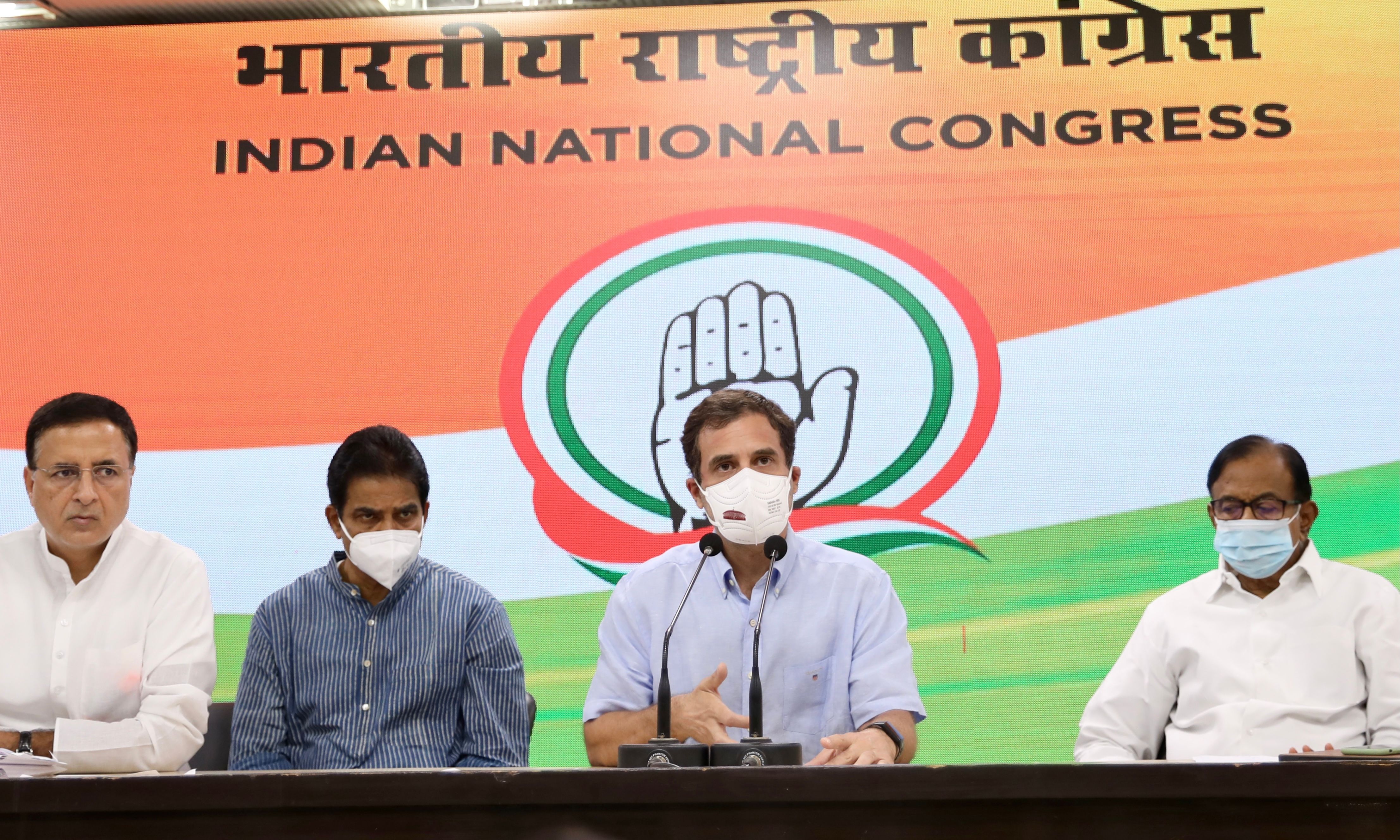 Shri Rahul Gandhi Ji and all of us are present amidst you with an extremely serious and important matter. I request you to keep your questions restricted to the matter, so that the seriousness of the subject can reach the country. Shri Rahul Gandhi said- “The Prime Minister and the BJP used to say that the Congress Party has done nothing in 70 years. There is a list here of all the assets that the Congress Party has helped build. These assets have been built using public money, thousands and thousands of crores of rupees over the last 70 years.

Now, the Prime Minister is in the process of selling the crown jewels of this country. I am going to read what is being sold and you can guess to which monopolist it is being sold to. Frankly, this entire list is going to go to only 3 or 4 people and these are the sectors that those 3 or 4 people are interested in.

So, Roads- for Rs 1.6 lakh crores- 26,700 kilometres of National Highways. Railways- for Rs 1.5 lakh crores- 400 stations, 150 trains, Railway tracks and woodsheds. Power Transmission- 42,300 circuit kilometres of transmission network. Power Generation- for Rs. 40,000 crores- 6,000 MW for Hydro, Solar or Wind Assets. Natural Gas Pipeline- for Rs. 25,000 crores- 8000 kilometres of GAIL pipeline. Petrol pipeline- 4,000 kilometres of Indian Oil and HPCL pipelines- for Rs. 22,000 crores Telecom- for Rs. 35,000 crores- 2.86 lakh kilometres of Bharat Net Fibres Optics. Warehousing- for Rs. 29,000 crores; 210 lakh metric tons of food storage. Now, who is this designed to hurt- this is designed to hurt our farmers! This is designed to make sure that one person gets monopoly in the agricultural system of India. Mining- for Rs. 32,000 crore- 160 coal mines. Airports- for Rs. 21,000 crores- 25 airports, you know who the airports are going to! Who these have been going to; these 25 will also go there! Ports- for Rs. 13,000 crores- 31 projects; 9 ports, you know, who that is going to. Stadium- for Rs. 11,000 crores- 2 national stadia! So, this is what is being given away; this is what is being gifted away. Now, we had a privatization policy. We are not against privatization. We believe that there should be a strategy for privatization.

We believed that no strategic asset would be sold. But in the present list here, there is Defence; in that there is Railways, you can see that strategic assets are being sold.

The whole idea behind this exercise is to create monopoly for 3 or 4 people. And my young friends who are searching for a job today, cannot find one. You cannot find a job because all the small and medium industries have been destroyed. And the reason, they have been destroyed is because the Prime Minister insists on building 2 or 3 monopolies that own everything in this country.

This is not just a gifting of India’s assets. This is going to ensure that the young people in India will not be able to find employment in the future. We say you privatize, but don’t harm the country. Because as soon as these industries are monopolized, you will stop getting employment at the same rate. This is an attack on your future.

There are many other issues related to this, which we haven’t gone into the details of, but we are concerned. There is the issue of what happens to reservation in jobs which will be lost forever, for example. There is an issue of what happens to strategic industries. So, we are going to study those things and we are going to come up with a viewpoint on those ideas. But the Central Idea here is that what this country has built over the last 70 years, is being given away.

The Government clearly has mishandled the economy. The government clearly does not know what to do. They have basically destroyed what the UPA built and now as a last resort they are selling everything that we had helped created. So, to me this is a huge tragedy. It is something that every patriotic person, every nationalistic person should oppose.

Now, if Chidambaram Ji would like to say something, please and then you can ask questions.

Shri P. Chidambaram said- I don’t wish to add too much. I just wish to point out that this exercise has been designed without any ex-ante criteria. The government should have spelt out, what its criteria is, where and what its goals were. You don’t embark upon such a big exercise without first setting out the criteria and what your goals are.

The only thing that I could glean from the Finance Minister’s press conference is and from the reports in your media, is we are going to raise money! Can that be a goal by itself? We are going to raise 1.5 lakh crore a year for 4 years. Can that be sole goal to virtually sell assets built over 70 years? The numbers which Rahul Ji read are numbers which they hope to get by way of rent. May I call it by whatever name, buteffectively rent. These are not the numbers of the money that has put in there. If you count the money that was put into building 26,700 kilometres of National Highway and go down the line, it runs into humongous amount of money. And in order to collect 1.5 lakh crore a year by way of rent; you call it by whatever name, they are indulging in -what I would call a ‘Grand Bargain Sale, a Grand Closing Down Sale!’

I know that there are many magicians in this country, butI can’t imagine a greater magician in this government. I think, this is a scandal. People must begin to discuss this, debate it. Unions, Workers, Student Organizations, Youth Organizations, concerned Citizens must begin to debate it. Obviously, we will ask for a debate in Parliament, but they may not give us a debate in Parliament. You must debate it in your newspapers, open fora, editorials, this must be debated. You can’t spring a surprise upon the country without any kind of consultation. Have the opposition parties been consulted? Have the Unions been consulted? Have the other stakeholders been consulted? I think, this is a dangerous slide and I wish the country wakes up to what these guys are up to.

Now, let’s suppose, you give 25 Airports, and you are helping create a monopoly of one person, owning all the Airports, fine, 40 years later, we have a discussion, but by that time the game is over. So, it is not a question of whether it is being sold, or it is being partially sold, it is the question of control. You are giving them full control for 40 years to do whatever they want. Shri Gandhi added- Well, they don’t have the courage to say- we are giving. So, they have to say, we are leasing it. But, for all practical purposes, if you are giving 400 stations for 40 years, what are you doing, you are giving it away. And my main point is that- look, everybody knows, who this is going to? There is no confusion. Everybody knows, who this is going to?

On another question that at a time when the economy has collapsed, there is a recession, when the full price will not be available, what is the compulsion that such a big decision is being taken? Shri Rahul Gandhi asked if the journalistwas keeping a statement or asking questions? But I accept it as a statement. The statement is that it has two goals. One goal is to give monopoly control to the two, three, four friends you have in different industries. The second goal is that the government has a severe shortage of money – whether due to mismanagement, whether it is covid mismanagement, demonetization, GST. So, there are two goals - but as Chidambaram Ji said, what he gets from this will not solve the problem. Because the problem is huge. So,its main target is - monopoly creation.

On another question that the government has said that the public will be the owner of the properties which we will sell, we will not be the owner? Shri Rahul Gandhi said, “What is this logic? If you sell it to someone, how would the public be the owner? You sell me your house and you remain the owner? How is this even possible?”

The creation of monopolies in this country is extremely dangerous for this country. We have dealt earlier with a monopoly in India, used to be called the East India Company. It enslaved this country. It was basically a monopoly and that is what is happening even now. We are heading into enslavement. So, that is something that has to be understood. Demonetization, GST, the way they designed it, is designed to do two things.

Number -1 it is designed to kill the informal sector, destroy the informal sector. Because the informal sector, if you do demonetization, doesn’t have the cash flow to save its business, its business dies. You can go and ask any small businessman that if you give him a shock like demonetization, he can’t survive. And GST, as it is designed today, is essentially an attack on small and medium businesses. It is targeted to hurt them by making them formalize themselves at tremendous cost, whereas the large company has no problem, large company can hire 5 or 10 accountants and say- we will fill GST, but, that individual shopkeeper or Mithaiwala or a person who is running a small shop, he doesn’t have the infrastructure to get those accountants, so his business just dies. So, those two ideas were to destroy the informal sector.

The three farm laws are to destroy the informal sector in agriculture and to ensure that monopolists can come into that sector. Mr. Modi believes that large monopolists can transform this country. He doesn’t realize that when you create such large monopolies, you cannot give jobs to people and when you cannot give jobs to people, it leads to social tension, social anger and then social explosion. So, you will see a dramatic increase in violence. You will see a dramatic increase in anger. You will see millions of youngsters, who simply cannot have a future, and they will look at the houses of these monopolists and they will wonder what went wrong with India, that is what is happening.

On another question about the strategy to make NMP a larger joint opposition issue, Shri Rahul Gandhi said- Yah! We do, and that’s why we have this press conference. And I am sure all opposition parties will agree on this. I don’t think there will be any… I think any sane person, in the opposition, even in the BJP, will agree with this.

On another question that this will end the reservation, the jobs will be lost, is the job a big issue? In response to another question in this regard, Shri Rahul Gandhi said that are you paying us a compliment, no because it says, if we are not going live, it means, we are saying the truth.

So let me tell you, this will bring a lot of knock-on effects. This will have an effect on the reservation. This will have an effect on Job losses. There will be different repercussions of this. We will study them in detail. And we have just talked to Chidambaram ji that Congress party should study them in detail and then put their position on them in front of you. On another question, how will the Congress party carry this issue across the country? Shri Rahul Gandhi said that I have clearly stated my stance on this- whether it is Demonetization, whether it is GST, Flawed GST, whether it is farmer’s law, all these Informal Sectors, Agriculture Sector, Small and Medium Businesses, it is an attack on them. Its goal is Monopoly Creation.