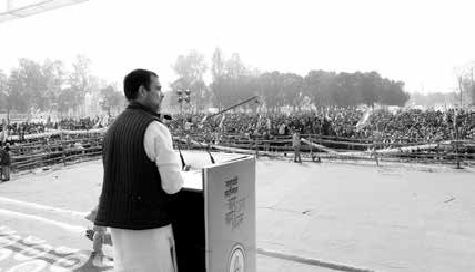 Raipur. At a time when a conspiracy to spread hatred and enmity amongst countrymen is being hatched in the country, the Congress government of Chhattisgarh, inspired by Gandhi ji and following his path, has tried to send a message of peace, non-violence, compassion, justice, love and harmony.

‘Sewagram’ is being built in Chhattisgarh on the lines of Wardha, under the leadership of Chief Minister Bhupesh Baghel, so that the values, principles, ideals and concept of ‘Gram-Swaraj’ of Mahatma Gandhi, along with democratic and constitutional values of freedom struggle, could be preserved.

‘Sewagram’ will be constructed on 75 acres of land in Nava Raipur, the capital of Chhattisgarh, for which the Government of Chhattisgarh has made a provision of Rs. 125 crores. Former National President of Congress Shri Rahul Gandhi performed Bhoomi Pujan of Seva Gram on February 03.

As has been envisioned by Mahatma Gandhi, ‘Sewagram’ is being built on the lines of Wardha in Chhattisgarh. This project will prove to be an inspiration to remember and learn Gandhian philosophy. Also, through this project, it would be possible to keep alive the memories of the freedom movement and the national history.

After the Bhoomi Pujan, former National President of Congress and MP Shri Rahul Gandhi also attended the Gandhi Vichar Seminar organized at Sewagram. He conveyed his best wishes for the Sewagram that is being built in Nava Raipur, Chhattisgarh and referred to it as a noble initiative through which we are trying to embody the ideas of Gandhiji. Quoting the thoughts of Gandhian thinker Shri Gopalkrishna Gandhi, he said that Gandhi was not just any person but he was an ascetic. He spent his whole life in austerity and devoted it to the cause of truth. Gandhians from all over the country who participated in the seminar, also appreciated this initiative of the Chhattisgarh government.

Addressing the seminar, Chief Minister Shri Bhupesh Baghel said that Gandhi and Gandhism are great assets to the country. He said that India and Gandhi complement each other, that one is incomplete without the other. Shri Baghel said that after Tolstoy, Phoenix, Sabarmati Ashram and Sewagram, Sewagram Ashram is being built in our Chhattisgarh. Old Sewagram located at Wardha has given an assistance of Rs. 1.50 lakh for the Sewagram being built in Nava Raipur.

While addressing the seminar Shri Purushottam Agrawal said that Chhattisgarh is a place where Sewagram will become the centre of indigenous modernity, enhancing its folklore through folk education; which will usher in an era of non-violent society not only for the whole country, but for the entire world.

Shri Kumar Prashant said that Gandhiji always lived amidst challenges and grave apprehensions, but he never distanced himself from them. He expressed hope that the Sewagram to be built in Nava Raipur would fulfil his dreams.

Shri Sachin Rao said that a person who is cradled in truth and treads on the path of truth cannot live without being a politician. Innovation is needed in the life of such people, who can meet new challenges through innovation.

Shri Chandan Pal said that Gandhi is being riddled with three bullets of religious communalism, nationalism and narrow paternalism, which needs to be stopped. Sushri Vibha Gupta of Wardha Sewagram said that Gandhiji sowed the seeds of Kandel Satyagraha here 102 years ago which is blossoming into Sewagram today.