PM threatens farmers but can’t stand up to China: Rahul 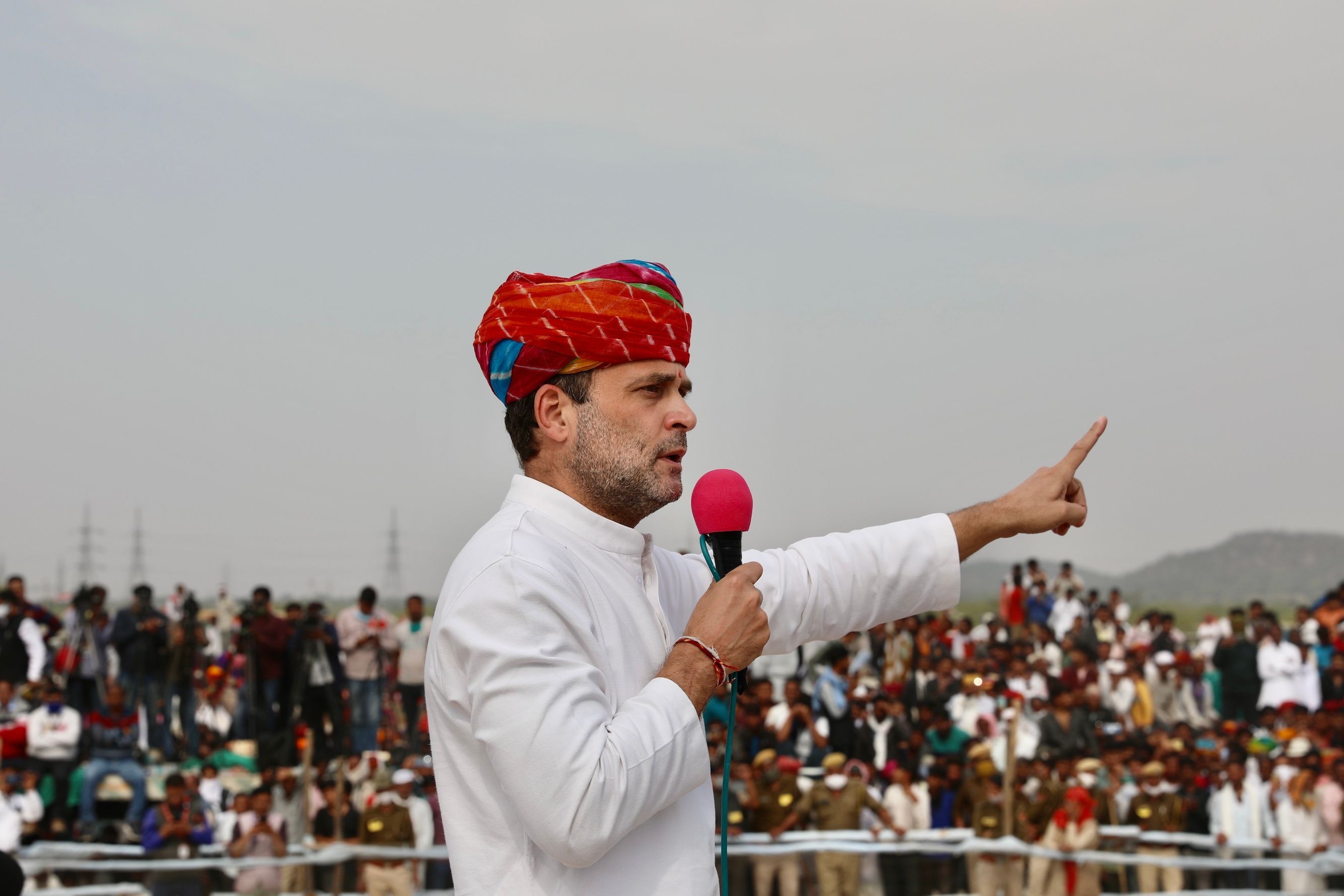 Jaipur (Rajasthan): Congress leader Shri Rahul Gandhi on 12th February, 2021, accused Prime Minister Narendra Modi of trying to clear the path for his “friends” through the three new Agri-marketing laws, saying he is threatening farmers when he cannot stand up to China. ”KisanMahapanchayats” were held by Congress in Hanumangarh and Sri Ganganagar districts of Rajasthan. Addressing farmer “mahapanchayats” in Pilibanga town of Rajasthan’s Hanumangarh district, he claimed that the laws will impact 40 per cent of Indians.

He addressed another Congress-organised farmers’ meeting in Sri Ganganagar’s Padampur town on the first day of his two-day Rajasthan trip. Instead of chairs, cots were placed on the dais for party leaders to sit upon in Hanumangarh. In Sri Ganganagar, there were rustic “mudda” chairs on the dais. Shri Rahul Gandhi said, “The new laws do not affect just the farmers,” adding, “His party will ensure that they are withdrawn. Even the British couldn’t stand before farmers.”

He said that Modi should first withdraw the laws if he wants to talk to farmers. Forty percent of people in the country who include farmers, traders and labourers will be hit by the implementation of the laws, the Congress leader claimed.

”They are not just farmers; they are traders, labourers, adhatiyas (middlemen). This is the business of Bharat Mata that feeds the nation,” he said in Sri Ganganagar.

”The objective of the laws is to shift the business of 40 percent people to two or three people. What will happen to those who sell grain, fruit and vegetables on roads if only one company starts selling grain, fruit or vegetables of the entire country?” he said.

Shri Rahul Gandhi said that the new farm laws are another blow to the people of the country after demonetization and the implementation of the Goods and Services Tax (GST).

“Earlier, it was the demonetization and I had said it was not a fight against black money, and the backbone of the country was being broken. But people didn’t understand this at that time,” Shri Rahul Gandhi said.

The Congress leader claimed that with the implementation of the new laws, government mandis will shut down and big businessmen will monopolise the purchase of farm produce.

Earlier, responding to criticism over dynastic politics, Congress leader Shri Rahul Gandhi had said that it has been over 30 years that a member of his family was Prime Minister, and asserted that he would not stop fighting for his ideological view just because he is the son of an ex-PM.

Continuing attack on Prime Minister Narendra Modi over the farm laws, Congress leader Shri Rahul Gandhi on 13th February, 2021, alleged that the PM wants to “hand over” the entire agriculture business to his “two friends”. Shri Rahul Gandhi made this remark while addressing two farmers’ rallies at Rupangarh in Ajmer and Nagaur’sMakrana in Rajasthan. Shri Rahul Gandhi, wearing a Rajasthani turban, reached the rally venue driving a tractor with Chief Minister Ashok Gehlot and state Congress chief Govind Singh Dotasra sitting with him.

He also stated that PM Modi is giving options, but the options are “hunger, unemployment, and suicide”.

“Future is being snatched from the youth. In front of your eyes, the backbone of the country is being broken. It began with demonetisation, after which the GST Gabbar Singh Tax was brought and small businesses were hit,” Shri Rahul Gandhi said in the farmers’ rally.

Farmers, labourers, traders are being sidelined and the path is being cleared for two-three businessmen. During the coronavirus lockdown, labourers requested the PM to give them tickets to go home but he did not yield to it and waived loans of Rs. 1.5 lakh crore of the rich, he alleged. Shri Rahul Gandhi said that it was his responsibility to tell the truth and it is for the people to listen or not to listen.

He further said that he kept silence in Parliament as a mark of respect to 200 farmers who died during the agitation against the farm laws but not a single BJP MP stood for it.

“The Speaker said I should give in writing. Now, I will give in writing to the Speaker that all members in the Rajya Sabha and the Lok Sabha should observe a two-minute silence,” Gandhi said.

About the farm laws he said, “The first law is about finishing the mandi system, the second is about allowing unlimited hoarding and the third is about snatching the rights of farmers to go to courts.”

Earlier in the day, he also offered prayers at a temple dedicated to folk deity Veer Tejaji in Ajmer’s Sursura village.