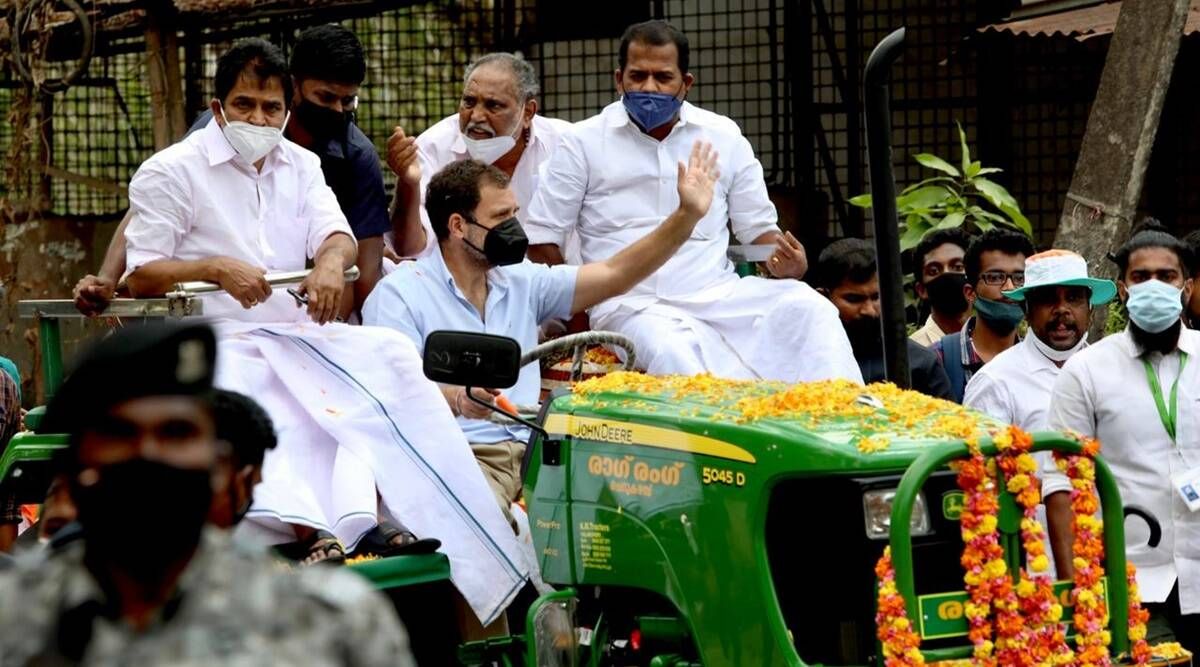 Wayanad: Former Congress President Shri Rahul Gandhi, who is on a two-day visit to his constituency in poll-bound Kerala, said that the entire world can see the difficulties being faced by Indian farmers but the Centre is unable to understand their pain.

Congress leader Shri Rahul Gandhi led a rally of around 200 tractors in Kerala’s Wayanad to protest against the centre’s farm laws and questioned Prime Minister Narendra Modi’s silence on the farmers’ protests in the country.

“We have pop stars who are commenting on the situation of the farmers but the Indian government is not interested. They the government are not going to take back these laws unless they are forced to. The reason is these three laws are designed to destroy the agricultural system in India and give the entire business to two or three friends of Narendra Modi,” the Congress leader, who reached his parliamentary constituency Wayanad ahead of the upcoming Kerala assembly elections, said after the 6 km long tractor rally between Thrikkaipatta to Muttil.

Continuing with his attack on the Centre, the Wayanad MP added, “Agriculture is the only business that belongs to Bharat Mata. These three laws have been designed for two or three people to own and control Indian agriculture.”

Referring to his ‘Hum Do, Hamare Do’ jibe in the Parliament, Shri Rahul Gandhi added, “Two people in the government are partnering with two people outside the government. So, the idea behind these laws is very simple — it is a ploy for these four people to control agriculture in the country. The idea is that farmers should now sell their products directly to these big businesses. They want to destroy the entire agricultural chain which protects 40% of our country and gives food to all the people.”

He alleged that the new farm laws will allow big businesses to approach farmers directly and the mandis will, therefore, be destroyed. Calling the laws a “direct attack on the Essential Commodities Act”, he claimed farmers will now no longer be in a position to negotiate the price of their produce.

“We will oppose these laws and make sure that the government is forced to take them back. We will not allow Bharat Mata’s business to be taken over by two or three of Narendra Modi’s friends,” said Shri Rahul Gandhi.

However, Shri Rahul Gandhi hit out at the ruling party while criticising the draft notification of the centre on the Eco-Sensitive Zone (ESZ) — a buffer zone around protected areas like Wayanad Wildlife Sanctuary.

“I also wish to raise the issue of a buffer zone which is going to cause tremendous hardships to people here. I wrote to the central government and asked questions in the parliament (over the issue). We were shocked when the Union minister said that the Kerala government has recommended to do so. I am also told that the centre is willing to reconsider the draft, if the state government changes its position,” the Wayanad MP said.

Earlier, inaugurating a KudumbasreeSangamam at PoothadiGrama Panchayat, Shri Rahul Gandhi said that the Congress works for the empowerment of the poor and alleged that the idea of the ruling BJP was to empower the most powerful.

“When Modi became Prime Minister, in Parliament House, in front of all of us, he ridiculed MGNREGA. He said MGNREGA was an insult to the Indian people,” Shri Gandhi alleged. He claimed that the Prime Minister was forced to increase the work and money of the scheme during the spread of coronavirus in the country. “And he was forced to accept during COVID-19 that only MGNREGA played the role of saviour of our people,” Shri Rahul Gandhi said.

He noted that the demand for MGNREGA, which provides social protection for the most vulnerable people living in rural India by guaranteeing wage employment opportunities, “skyrocketed” during COVID.

The Wayanad MP said that both SHGs and the MGNREGA were brought in by the UPA government not as a “gift” but as “tools for empowerment for making our people stronger.” He also said that the implementation of the MGNREGA scheme was the major reason for the “tremendous economic growth” during the UPA period.