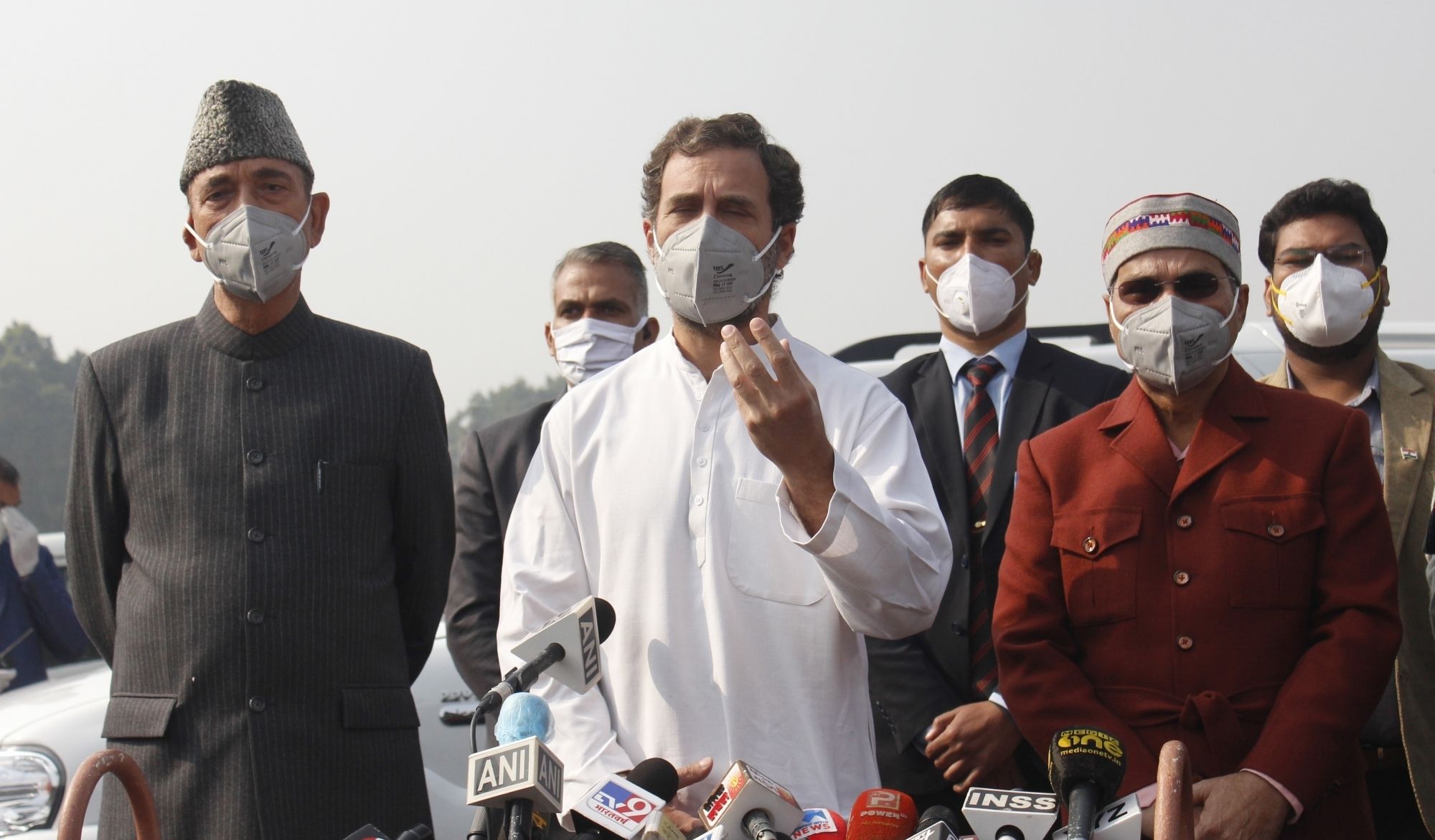 Addressing the journalists, Shri Rahul Gandhi said that just a few days ago I went to meet the President with the leaders of the Opposition Party and now with the senior leaders of the Congress Party. We told the respected President that these laws that have been made, are anti-farmer and are going to cause tremendous harm to the farmers and the workers. The government had claimed that these laws were for the farmers’ benefit but, on the contrary, the country is being a witness to the farmers’ agitation against these laws and I want to convey to the Prime Minister that these farmers will not get retracted. Till these laws are withdrawn, the Prime Minister should not concern himself with whether these farmers and laborers would go back to their homes or not.

What is required of the PM is to do a joint session and withdraw these laws immediately, because the farmers are not going to go back. All of us, all the parties of the opposition stand with the farmers and the workers and will continue to do so. Also, these laws were wrongfully passed; Without debating, without discussing with the farmers, without asking the workers. These laws have been imposed from above and will have to be removed, will have to be withdrawn.

In response to a question, Shri Rahul Gandhi said that three of us went to the President with millions of signatures. We carried the voice of the farmers to the President. It is winter and the entire country is seeing that the farmers are in sorrow, in pain and they are even dying. The Prime Minister will have to pay heed. I generally have a premonition and so I warn well in advance. I had said about Corona that it would wreak havoc. At that time, nobody listened to me and today, I am reiterating that no power can withstand the power of farmers or that of workers. If the Prime Minister does not withdraw these laws, it would not only be the BJP or the RSS at loss, but, the entire country is going to suffer.

On another question that it is being repeatedly claimed by the BJP that these farmers who are protesting, they are Naxalites, Khalistanis, and are being provoked by the opposition, what will you say? Shri Rahul Gandhi said that the BJP, Narendra Modi ji have only one goal and that has been understood by the farmers and the laborers. The aim is to make money for those two or three or four big crony capitalists who surround him. Narendra Modi Ji maligns the image of whosoever stands against him. If farmers stand up to their rights, he calls them terrorists; if workers stand up to their rights, he refers to them as terrorists. One day if Mohan Bhagwat Ji stands up, Modi Ji would say, the former is also a terrorist. This simply means that whoever will try to oppose Narendra Modi, would be considered a terrorist and I have already told you who Narendra Modi is working for. He has two or three crony-capitalist friends, who are being handed over the whole of India. This is the reality.

On a further question, Shri Rahul Gandhi said- Look, it is a very simple thing- there are millions of people who live because of our agricultural system. They are labourers, they are farmers, they are small traders, these are the people and they are the backbone of the country. Now, we understand that agriculture has to be reformed. What we are saying is that if you destroy the system, these millions of people will have nothing to do. They will not be able to feed themselves and you will create massive destruction, massive pain in the country. Why is the Prime Minister doing this? It is a very simple calculation. The Prime Minister is doing this, because he wants to help 2 or 3 businesspeople. He does not care what happens to these people (farmers and common men). He will construct whatever narrative he has to construct. To make sure that the wealth transfer that is taking place to 3 or 4 people continues, he will call people terrorist, he will call people anti-nationals, he will call people criminals, he will do whatever he has to do to transfer the wealth from these people (farmers), the back bone of this country to those people, 3 or 4 of them, 5 of them, that is the crux and we are fighting this. We are saying that in India, where you have destroyed the agricultural system, will not function. Just like I said- take corona seriously, corona is going to kill people in massive numbers if you do not act. At that time, they said- you know- scaremongers. Now, they are not saying scaremonger. When I suggested to the Prime Minister that do not do this in a centralized way, give power to Chief Ministers, he didn’t do it. He caused thousands and thousands of people to die because he didn’t do it and then afterwards when I said it in the press conference, he did it. So, the point is, you have incompetent man who is controlled by certain other people. This is what India has to understand, this is what all youngsters have to understand. You have an incompetent man who doesn’t understand anything, running a system on behalf of 3 or 4 other people who understand everything. Their aim is to take huge amounts of money from the poor people of India and put it in their pockets and that is what we are fighting against. Frankly, it doesn’t matter what you think right now because all of you will face it. There is not going to be a single person in this country, who is not going to face it. If you are farmer, you will face it; you are a small businessman, you will face it; you are a journalist, you will face it. This is an assault on the idea of India, that is why, we are standing here, that is why, I have gone to the President, that is why we have signed these forms.

On another question, Shri Gandhi said- That is not true. That is just not true. We are not allowed to go out. We are not allowed to go out of the AICC office. The police stop us from going out. Why don’t you let us go out? Why don’t you let me go and tour in the states? See what happens. Every single farmer of this country, every single labour of this country stands up. But you deploy police. If we go to Hathras, you get us arrested, you do not allow our MPs to come out of AICC and then you say that everything is fine.

The Prime Minister needs to realize that there is a limit to this. If you have to do a little bit, if you have to help two-three people you can, but, the way Narendra Modi is doing things, I am repeating that no youth of India will get employment. All small businesses, all middle size businesses will collapse.

Remember the other thing, the thing that you have forgotten, China is sitting at the border. China has taken away thousands of kilometers of Indian land. Why doesn’t the Prime Minister say anything about them? Why is he silent about it? So, what I say is that a whole combination is being formed. On one hand, you are breaking your system, you are creating bitterness among your people, you are killing your farmer, you are killing the worker and on the other hand, outside forces are being witness to this. They are considering it to be a ripe opportunity for them when Narendra Modi is weakening India. I am telling the country. I am warning you to see what is happening and I am also telling you the press people. I understand that you get your salary and it is very difficult for you to say what you want to say. But your country, our country is going to suffer a tremendous loss. This country is being led on a very dangerous path. This is what I am saying.

On another question that a lot of Congress leaders have been detained? Shri Rahul Gandhi said that this is their way. Their way to destroy, kill, beat, this is their way, but we are not afraid.

On another question, the government is repeatedly saying that these agricultural laws promote investment? Shri Rahul Gandhi said that the question is, who will do the investment and who will get the benefit of the investment? The question is that who will invest in the agricultural system of India and who will make money out of it? Till date, the farmer has invested in the agricultural system of India, the laborer has invested, these young men who are standing at our borders, their parents have done the investment and who gets the returns? Returns are reaped by his few industrialist friends. The entire country knows this. The whole country understands that we do investment. (Asking a journalist Shri Rahul Gandhi said- What do your parents do?) You were an agricultural farmer, now you are a journalist, you know whether your father invested or not? I am asking you, you are a woman of the country, has your father invested or not? Your mother is a farmer, she has invested, for whom? Did she invest for these two-three people or for your family, for your education, for your health? It was done for your health, for your education, but not for these two or three businessmen. So, the question is, who is doing the investment, your parents did it, the crores of farmers did it and who is getting the returns?

On another question, what is the strategy of the Congress to counter the BJP on the issue of convincing the farmers, Shri Rahul Gandhi said that what you are talking about? Do you consider the farmer of India as an idiot? He understands just like you do. If there are millions and thousands of people sitting here, outside Delhi, have they come here to enjoy a dessert? Do they not understand what is happening? They know everything very clearly. They know that Narendra Modi is stealing. They know that they invest throughout the day, invest 24 hours of the day and the returns go elsewhere.