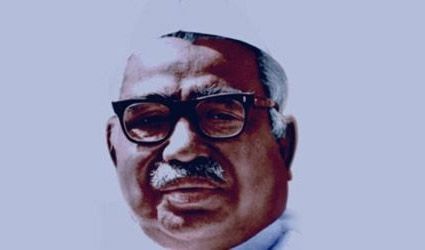 Babu Jagjivan Ram, fondly known to us Indians as ‘Babuji’, was one of the tallest Dalit leaders of the 20th century India. His long record as a parliamentarian is still unmatched. Born in a simple Dalit family in 1908, he had to face the caste-based discrimination from his early childhood as it was aregular practice in those days. But Babuji fought this caste-based discrimination all through his life, from childhood till the end. In 1922, he joined Town School Arrah (Bihar) where there used to be provisions for two water pots one for Hindus and one for Muslims. Once Babuji used the Hindu pot for drinking water and it was opposed by the section of upper caste people. The school authority placed a third pot for the untouchables. Jagjivan Ram ji broke the third pot number of times till it was finally withdrawn by the school management. A Dalit leader was born.

In 1925, Pandit Madan Mohan Malviya visited the school where Jagjivan Ram was studying. His welcome address was given by Jagjivan Ramji. Pandit Malviya was impressed by his oratory skills and intellect so much so, that he invited Jagjivan Ram to study in Kashi Hindu Vishvavidyalaya. He did his intermediate from there and moved on to Calcutta University for his graduation.

His leadership qualities flourished after joining Calcutta University. In order to awaken the Dalits, he started organizing Ravidas Jayanti’s and in 1934 he organized it at a such a large scale that he was noticed by Netaji Subhash Chandra Bose. In 1934, Bihar was hit by earthquake and he started organizing relief work for the people in distress. This was the time when he came in contact with Mahatma Gandhi. In 1935, he established All-India Depressed Classes league to fight for the equality and prosperity of the untouchable section of the society and in 1935 itself he fought for the voting rights of Dalits in front of Hammond Committee. The Committee accepted his suggestions and Dalits were given voting rights. Thus, another milestone was achieved.

During Quit India movement in 1942, Babuji was made the in-charge of Bihar and North East India but soon he was arrested. Upon being released in 1943, he once again started working towards independence of India. He was among those 12 selected national leaders who were invited by Viceroy Lord Wavell in 1946 to form the interim government. He was made the Labour Minister in the cabinet of India’s first Prime Minister Pandit Jawaharlal Nehru. This brought him to the central politics.

As the first Labour Minister of Independent India, he had the responsibility to serve the interests of the labour class. He had the first hand experience of the plight of labourers in his Calcutta days. In securing the rights of the working class, he came up with many new Acts, some of them being the Industrial Disputes Act 1947 and Minimum Wages Act 1948.

As the Minister of Communication in Jawaharlal Nehru’s cabinet, he was instrumental in the nationalizing of the private airline companies and in establishing the network of post offices in far flung rural areas.

As a Minister of Agriculture and Food in the Indira Gandhi government, he laid the foundation for Green Revolution with Dr. Norman Borlaug and in couple of years India became a food surplus country. But the highest point in his political life was yet to come. In 1971, he successfully led the Indian side of Bangladesh Liberation War as a the Defence Minister in the cabinet of Smt. Indira Gandhi and was instrumental in changing the map of the subcontinent. He was an important part of PM Indira Gandhi’s Strategic team that made history and changed the geography of the world. Babuji was not only a successful administrator, but he was also a great political leader. In 1969, he was elected as President of All-India Congress Committee after a split in the Congress with stalwarts like K Kamraj, Neelam Sanjeeva Reddy and Morarji Desai parting ways. As AICC President, he had the responsibility of popularizing and establishing his side of Congress Party as the original one. He silently built the organization behind the able leadership of Smt. Indira Gandhi and the historic win of Congress in 1971 elections proved his ability as a leader and an organization maker.

There can be opinions as to who was a greater Dalit leader Dr. BR Ambedkar or Babu Jagjivan Ram. While both of them fought for the rights of the Dalits and both were unanimous in demanding affirmative action for the protection of Dalit rights in the form of reservation in the Constituent Assembly. But, there were some major differences between them too. While Dr. Ambedkar felt that the Dalits would not get their rightful treatment in the Hindu society and hence advocated his followers to leave Hindu fold whereas, Babuji firmly believed that they belonged to the Hindu society and shall fight for their rights staying within the fold. He affirmed his belief time and again. He was a true nationalist and a true Humanist. The author is Spokesperson in BPCC and Member AICC