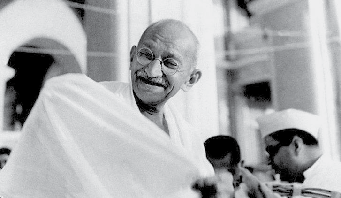 Nationalism is defined as “a political creed that underlies the cohesion of modern societies and legitimizes their claim to authority. Nationalism centers the supreme loyalty of the overwhelming majority of the people upon the nation-state, either existing or desired. The nation-state is regarded not only as the ideal, ‘natural’, or ‘normal’ form of political organization but also as the indispensable framework for all social, cultural and economic activities”.

Gandhi wrote in ‘Young India’, June 18, 1925, that ‘It is no nationalism that is evil; it is the narrowness, selfishness, exclusiveness which is the bane of modern nations which is evil’. Explaining again (add) in detail in ‘Young India’ of September 10, 1925, Gandhi wrote that ‘Illustrations are taken from recent wars and administration of law in civilized societies to prove that hatred seems to be of the essence of nationalism. Nevertheless, it is the grossest of delusions.’ Nationalism is the dominant feature of the political thinking of Gandhi.

Nationalism in India can, thus, be described as the consciousness and the recognition of the socio-cultural unity in the past. But it was more than a spiritual imperative because it has to operate as a device to letting out the aspiration and the hopes of the educated middle class.

The development of Indian nationalism was not always coherent and consistent. The liberal nationalism was primarily secular. The confluence of religion and politics in extremist nationalism succeeded in broadening the base of the nationalist movement. Religion and nationalism became almost convertible terms in the speeches and the writings of the extremists. This is true of both Hindu extremism and Muslim extremism. Gandhi was impressed by the extremists but was influenced by the liberals. Gandhi’s nationalism can be described as quasi-liberal and quasi- extremist.

Gandhi’s attempt to formulate the theory of nationalism on the basis of certain liberal and extremist principles was deliberate. He was half-liberal, half-extremist. He surely succeeded in striking a new track. It is interesting to note that Gandhi described himself as the true disciple of Tilak but at the same time declared Gokhale as his political guru. What Gandhi borrowed from Tilak was “the love of country and the steady pursuit of Swaraj.”

Secondly, Indian nationalism is the by-product of struggle for freedom. The changing contours in the way of achieving the goal to free the country from colonial yoke, has also changed the very nature and scope of Indian nationalism. In other words, Indian nationalism is also not the by-product of certain revolutionary ideology or product of certain social transformation due to different stages of growth in the economic system. Rather, it has been based on certain unorthodox experiences linked to the growth of anti-imperialistic thrust of the movement. The challenges of colonial period, along with the sufferings caused to its people due to colonial rules, made its leaders to devise strategies to handle that crisis. Moreover, as a result of the prevailing foreign rule the main objective of this struggle has been towards the independence of India.

Gandhi wrote in ‘Young India’, October 13, 1921, that ‘Indian nationalism is not exclusive, nor aggressive, nor destructive. It is health-giving, religious and, therefore, humanitarian’. Further he wrote in ‘Young India’, March 12, 1925, ‘My nationalism is as broad as my Swadeshi. I want India’s rise so that the whole world may benefit. I do not want India to rise on the ruin of other nations.’

Gandhi’s idea of nationalism was part of his overall philosophy from which interpretation of nationalism could be discerned. It was linked to his struggle for the freedom of India. Gandhi wrote ‘My idea of nationalism is that my country may become free, that if need be the whole of the country may die, so that the human race may live. There is no room for race hatred there. Let that be our nationalism. Further, he wrote that ‘nationalism, like virtue, is its own reward. A nationalist will ever think of service, never of power or riches.’

Gandhi discussed the idea of nationalism for the first time at great length in the seminal work ‘Hind Swaraj or Indian Home Rule’ in 1909. He however seldom used the term ‘Nation’. He used the terms ‘Swaraj’, ‘Swadeshi’ or Indian Civilization. Gandhi used the word Praja for nation. He felt that the traditional notion of Praja offers a basis upon which new edifice of a modern, composite Indian nation-state could be built. In Hind Swaraj, he pleaded for the development of moderate, liberal nationalism based on the concept of praja. Gandhi rarely used the term ‘Nation’. Gandhi referred that India was not a motley collection of groups but consisted of people sharing common aspirations and interests and a vague but nonetheless real commitment to the kind of spiritual civilization. In this context, Bhikhu Parekh has rightly observed that when he occasionally used the term ‘nationalism’ he largely meant ‘love of one’s country’. For the most part he preferred ideas of collective pride, ancestral loyalty, mutual responsibility and intellectual and moral openness.

Nationalism of Gandhi is composed of three major ingredients: Swaraj, Communal harmony and non-violence. Swaraj is the first. Swaraj signified self-rule and self-restraint. Swaraj would not mean change of rulers but it would provide an opportunity for the establishment of justice, liberty and equality for one and all in the country. Justice and slavery could not co-exist. Swaraj would, therefore, ensure the regulation and control of authority by the people. It would be a “healthy and dignified independence”. The second ingredient of Gandhi nationalism is communal harmony. According to him, it amounts to the active participation of all the communities in the freedom struggle. It also means the unity of the people which should come through religion. Gandhi subscribed to composite nationalism. He did not countenance nationalism based on religion, especially, in the Indian context of multiplicity as it would divide the people on artificial lines. So, Swaraj and strong self-government is not possible without communal harmony. Non-violence is the third ingredient of the nationalism of Gandhi. For Gandhi, non-violence was the first and the last article of faith. “My marriage to non-violence is such an absolute thing that I would rather commit suicide than be deflected from my position,” said Gandhi. He thought non-violence would prevent a bloody revolution and anarchy in the country. It would lead to democracy and not to despotism. It is the law of the human race and is infinitely greater than the brute force. It is not “the weapon of the weak” but “presupposes ability to strike.” It is an active force free from weakness. It exercises a sane pressure of love and good-will.

From the study of ‘Gandhian Thought and Action’ and available literature, following features of nationalism emerge: Firstly, Gandhi’s nationalism was “incorporative” forging a nationalist harmony between different kinds of groups in India. His ideas of composite nationalism included not only religious groups but castes and communities in general. Secondly, Gandhian nationalism was pursuit of emancipation from the colonial yoke. He was against the use of any sort of violent and aggressive means for this objective as it was used in the West. He emphatically rejected a nationalism that sought freedom through violence. He was in favour of use of the method of ahimsa or non-violence in thought, action and deed for this end. Thirdly, Gandhi’s nationalism has been the collective assertion of all communities, including the deprived strata of the society. He was always for a nation based on the plurality of population from different strata of the society. Fourthly, Gandhian nationalism has secular outlook, despite his being attached to religion. Fifthly, Gandhian nationalism had internationalistic overtones. Gandhi wrote: ‘It is impossible for one to be inter- nationalist without being a nationalist. Internationalism is possible only when nationalism becomes a fact, i.e. when peoples belonging to different countries have organized themselves and are able to act as one man. It is not nationalism that is evil, it is the narrowness, selfishness, exclusiveness which is the bane of modern nations which is evil. Each wants to profit at the expense of, and rise on the ruin of, the other. Indian nationalism has struck a different path. It wants to organize itself or to find full self-expression for the benefit and service of humanity at large’. Sixthly, Gandhi was also not in favour of communitarian approach. He rather used civilizational context in terms of plurality and synthesis. It becomes all the more evident during the time of Jinnah’s demand for separate nationhood on the basis of Muslims as separate community. Gandhi viewed that unlike the European countries, India was not a nation but a civilization which had over the centuries been benefited from the contributions of different races and religions and was distinguished by its plurality, diversity and tolerance. It was “Community of Communities”, each enjoying considerable autonomy within a larger and shared framework. Gandhi added that Indian Muslims are Indian not merely in a territorial but also in a cultural sense, and co-heirs with the Hindus to Indian civilization. Though they did have several distinct customs and social practices, yet this was equally true of every other community and could not prevent them from living peacefully within a single state. Seventhly, his nationalistic thrust was based on the total mobilization of the masses. That is why with the arrival of Gandhi, on the scene of Indian freedom movement, has brought about a qualitative difference in the emergence of nationalism.

In fact, Gandhian nationalism was beyond sectarian and narrow outlook coordinating all castes and classes together. It even pleaded for the upliftment of downtrodden and backward classes so that an egalitarian and harmonious social system could be evolved. His nationalism was secular and above the narrow and petty confines of religion. It was not dogmatic and ritualistic, rather imbibed in the larger framework of civilizational context preserving Hindu-Muslim unity. Gandhi was not a conservative nationalist rather internationalist in his approach. His nationalism was woven in the all-embracing concerns for humanity. He did not approve of ‘communitarian’ nationalistic frame, but he was in favour of ‘civic humanism’. In India, nationalism is closely linked with its struggle against colonial yoke. So, Gandhi made this feeling of nationalism a movement for the masses. To mobilize the huge number of masses, he not only preached and practised non-violence movements but also introduced constructive programmes for the national unity and integrity. Therefore, Gandhian nationalism could be well understood by understanding his philosophy and broad ideological moorings which not only worked towards the independence of India but also integrated it in the form of a nation.

One may conclude what Simone Panter Brick wrote. Gandhi’s nationalism seems simple and straightforward: he wanted an independent Indian nation state and freedom from British colonial rule. But in reality, his nationalism rested on complex and sophisticated moral philosophy. His Indian state and nation were based on no shallow ethnic or religious communalism, despite his claim to be Hindu to his very core, but were grounded on his concept of swaraj - enlightened self-control and self-development leading to harmony and tolerance among all communities in the new India. He aimed at moral regeneration, not just the ending of colonial rule. Perceptive and original portrayal of Gandhi’s nationalism analyses his spiritual and political programme. Gandhi’s nationalism was, in Roger Louis’s phrase, ‘larger than the struggle for independence’. He sought a tolerant and unified state that included all communities within a ‘Mother India’.