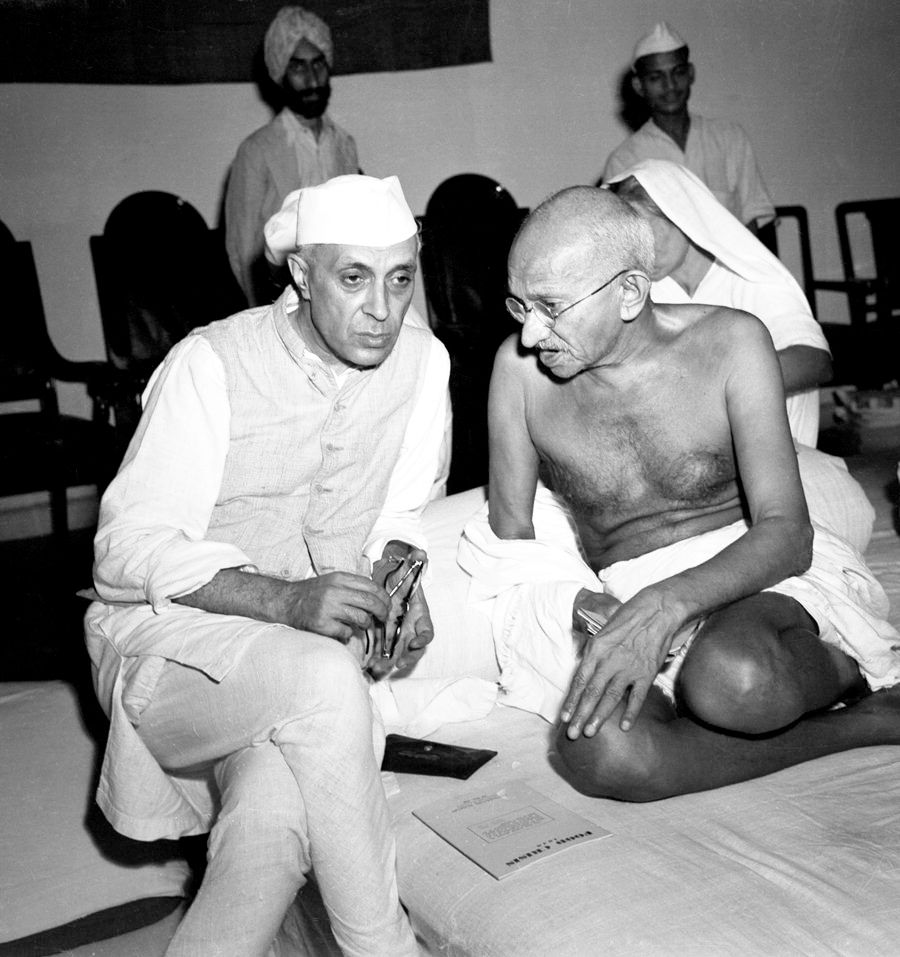 Mahatma Gandhi and Pandit Jawaharlal Nehru shaped the destiny of India and of Indians thereof. One cannot think of India without ‘Bapu’ and ‘Chacha Nehru’. They became natural leaders of India by sheer hard work, honesty, pristineness of thoughts, purity, readiness to work for the mother land and its people to set example for others to follow. They were iconic personalities who derived legacy through their creativeness, thought, action, deed and ethical behaviour. Gandhi said that ‘My life is my message.’ Similarly, for Nehru: ‘Aaraam is Haraam.’

In pre independence India, Gandhi - being an undisputed leader - dominated the freedom struggle. Contrary in post- independent India, Nehru being the first Prime Minister built everything from scratch. Jawaharlal Nehru built India brick-by-brick and laid strong foundation of a strong parliamentary democracy and all modern institutions and system of governance. When we talk about New India, strong India, self-reliant India, Make-in India, we must not forget that its foundation was led by Nehru. Today, we proudly call India self-sufficient in food, a vibrant democracy, a secular and emerging super power. We are nuclear power, space power and what not! Credit goes to Pandit Jawaharlal Nehru and his vision for India.

Sacrifice of Gandhi and Nehru for the cause of country and people is unparalleled in Indian history. We can criticize, romanticize Gandhi and Nehru which is natural due to ideological differences. But we must remember that we cannot afford to ignore their sacrifice and contribution. Gandhi and Nehru must be seen in ‘Text’ and ‘Context’. They were close associates and derived strength from each other. They were responding to contemporary challenges but its impact was everlasting. India was in their blood and deed. They dedicated their lives to Her liberation and cause.

Gandhi and Nehru met, for the first time, during Lucknow Congress during Christmas, 1916. In due course of time, Nehru became a true follower of Gandhi. Not a blind one. Nehru wrote about Gandhi in An Autobiography- “What a wonderful man was Gandhiji after all, with his amazing and almost irresistible charm and subtle power over people. His writings and his sayings conveyed little enough impression of the man behind; his personality was far bigger than they would lead one to think. And his service to India, how vast they had been. He had instilled courage and manhood in her people, and discipline and endurance, and the power of joyful sacrifice for a cause, and, with all his humility, pride. Courage is the one sure foundation of character, he had said; without courage there is no morality, no religion, no love. One cannot follow truth or love so long as one is subject to fear.” With all his horror of violence, he had told us that “Cowardice is a thing even more hateful than violence.” And “Discipline is the pledge and guarantee that a man means business. There is no deliverance and no hope without sacrifice, discipline, and self-control. Mere sacrifice without discipline will be unavailing.” Words only and pious phrases perhaps, rather platitudinous, but there was power behind the words, and India knew that this little man meant business.”

Further Nehru wrote: “He came to represent India to an amazing degree and to express the very spirit of that ancient and tortured land. Almost he was India, and his very failings were Indian failings. A slight to him was hardly a personal matter, it was an insult to the nation...”

Nehru himself admitted in The Discovery of India that “Some kind of ethical approach to life has a strong appeal for me, though it would be difficult for me to justify logically. I have been attracted by Gandhiji’s stress on right means and I think one of his greatest contributions to our public life has been this emphasis. The idea is by no means new, but this application of an ethical doctrine to large-scale public activity was certainly novel. It is full of difficulty, and perhaps ends and means are not really separable but form-please check together one organic whole.”

Gandhi and Nehru shared a rare bond of love, affection and understanding of each other’s thought and action. Both had a deep understanding of Indian culture and civilization and also a deep sense of history. To understand Gandhi and Nehru, we have to be objective and analytical but at the same time synergic, interdisciplinary and holistic. Unfortunately, we are trained to be specialists; we see the parts but not the whole. But if everything is related to everything else, and nothing stands apart, knowing the part alone would lead to knowing the whole. Universe is a system of which the solar system is a subsystem; in the solar system, the earth is a sub-system; in the earth as a system, lithosphere, hydrosphere, ionosphere, atmosphere and biosphere are sub-systems; in the biosphere, human species form a sub-system; in the human species each family and individual forms a subsystem. This being the case, to understand even an individual in full, we have to treat him as a part of the whole universe. True that he is more closely related to the systems nearer to him but he is influenced and also influences by his thoughts and deeds not only his fellow human beings, but also all that which surrounds him, nature included. All that we do has its implication far wider than we realize. Real Gandhi and Nehru are men of systems and unless we see them that way, we cannot understand them.

Firstly, both Gandhi and Nehru had firm faith in freedom and democratic values. Secondly, Gandhi and Nehru both studied in England and had a liberal outlook. Gandhi spent 21 years in South Africa which give him an experience of how to fight non-violently with the mighty British Empire. Both Gandhi and Nehru travelled widely and their long stays in England had a direct impact on their thinking. Thirdly, Gandhi and Nehru by birth were both Hindu by birth. But they were secular in public and private life. Fourthly, Gandhi and Nehru never lived a life of duality. They never had any mask. They were ‘Karmayogis’ inside-out. Fifthly, Gandhi and Nehru both had a deep understanding of Indian History and Culture. Gandhi used ancient wisdom in modern context wisely. He wrote ‘Indian Home Rule’ (Hind Swaraj), ‘An Autobiography or My Experiment with Truth’ and ‘Satyagraha in South Africa’. These three books are essential to understand Gandhi. Similarly, Jawaharlal Nehru’s three classic-‘Glimpses of world History’, ‘An autobiography’ and the ‘Discovery of India’- remain essential readings for understanding his ideas. No Prime Minister of any country wrote like Nehru. Finally, both derived power from masses. They inspired masses and masses inspired them. They connected themselves with masses. They became their natural leaders. Both will be remembered till eternity.

Gandhi had a firm faith that Jawaharlal Nehru would speak when Gandhi was no more. After going through words and deeds of Nehru, one can draw a conclusion that in every sense Nehru was a true Gandhian. He had an idea of India and Indians. The credit of whatever fruit of development we are enjoying today goes to Nehru. He laid the foundation of Modern India. It is because of him today that we have a vibrant democracy, an independent Election Commission and Judiciary. Nehru gave us AIIMs, IITs, IIMs, Bhakra-Nangal Dam, Hirakund, BARC, Indian Space Programme, BHEL, Steel Plants and other industrial complexes which are essential for development of a newly independent country like India. We, the educated people and Gandhians, who are basically anti-Gandhi in their thought, action and deed create a watertight compartment between Gandhi and Nehru. One must read Nehru’s first speech which he gave after getting freedom from the yoke of British Empire. Every word carries meaning and vision for future, what he wanted to do for India and Indians. Nehru fulfilled the dream of Bapu. Methods might have been different but every action of Nehru was Gandhian - keeping the aspirations of people of newly independent country at the centre. Gandhi rightly said about Nehru on April 1, 1947, at a Prayer meeting that ‘By the grace of God, we have a gem of man in our midst who wants to embrace the whole world. Should we not maintain peace if only to honour him?’

One can see Gandhi in Nehru and Nehru in Gandhi. Today, we have forgotten Gandhi and Nehru. They stood for self-respect, honesty, integrity and self-esteem of individual and believed in the system of governance. My lifelong mission is to promote Gandhian and Nehruvian values in the whole world. One cannot create history by changing the names of institutions created by Nehru. Nehru is Nehru, the creator of secular, democratic and vibrant India.