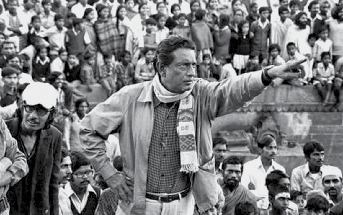 The year 2021 was Satyajit Ray’s Birth Centenary year. Ray is one of the famous filmmakers not only of India, but of the world. He made notable contribution by taking Indian cinema to the world and catering to the global cinema and its language. Among the cultural things that have travelled from India across the world after 1947, Satyajit Ray and his cinema are prominent, and are relevant even today. Satyajit Ray is not only watched by western countries, but his films are even included in the curriculum of their universities. Satyajit Ray is a great cinematic medium to understand not only India, but the entire South Asia.

The present Government of India has celebrated Ray’s Birth Centenary with great prominence. The National Film Development Corporation (NFDC) showed his films on its website for free for a few days. These include beautiful films like GhareBahire, Aagantuk, and Ganashatru. These were created by the NFDC itself. The Films Division working under the Government of India, the Film and Television Institute, the National Film Museum, and the Satyajit Ray Film Institute have also actively participated in the festival. The Award for Highest Contribution to Cinema, announced in Ray’s memory, was awarded to Hungarian filmmaker IstvánSzabó and American director and artist Martin Scorsese. Accepting the award, Scorsese described it a proud moment and referred to Ray’s film ‘PatherPanchali’. Recalling the music of Ray’s films, he also told that when his daughter was 12-13 years old, Scorsese had showed her ‘PatherPanchali’, and how the film had given her daughter a new way of perceiving the world. Martin, who rose to fame by making ‘Mephisto’, made a special mention of the influence of 3 of Ray’s films Apu Trai, Shatranj Ke Khiladi, and Abhijaan.

Satyajit Ray is the pioneer of new cinema in India. Apart from establishing Satyajit Ray, PatherPanchali which came out in 1955, gave a new energy to the young film makers in the times to come; who were filled with many dreams and new ideas. He was convinced that we can create such realistic cinema even in our country, and allow Indian cinema to soar. A discussion of India of the Nehruvian era would be incomplete without a discussion of Satyajit Ray’s films. Pandit Nehru and Ray shared a very special relationship. While Ray discussed the social and political condition of the then India through his films, he also had a cordial relationship with Pandit Nehru. Many of his films in the 1950s and 1960s raised the problems of unemployment and economic hardship without fearing intimidation. They also included direct-indirect criticism of Nehru’s policies. Possibly, few people know that Satyajit Ray had designed the cover of Nehru’s book ‘The Discovery of India’ - ‘Bharat EkKhoj’. They say that when Satyajit Ray’s ‘PatherPanchali’ was accused of selling India’s poverty, Pandit Nehru is said to have defended him and praised the film for its “Sympathetic portrayal of poverty”.

At the same time, when Indira Gandhi offered him to make a film on Nehru’s social welfare schemes, he flatly refused. But from 1960 onwards, Indira Gandhi and Ray maintained a close, cooperative, and patronizing relationship with cinema. As the Minister of Information and Broadcasting, Indira Gandhi showed personal interest in the film society movement and the development of art cinema and continued to cooperate in every possible way. Ray had been one of the founders of the Film Society since 1948. The two had worked together in 1959 for the Indian Film Federation Society. It was Indira Gandhi who, under Ray’s influence, de-censored the films shown in the Film Society.

In March 1992, Satyajit Ray was awarded the Oscar, the highest cinematic honour in the world. He was honoured with this award for his lifelong contribution to the field of cinema. Ray is the only filmmaker from South Asia to receive this award. After this, the Government of India honoured Ray with the Bharat Ratna. Ray was in the hospital at this time, and the then Prime Minister Narasimha Rao himself visited Ray. Satyajit Ray bade adieu to this world on April 23, 1992, after a prolonged illness, leaving behind a legacy of art and culture that may take us decades to understand and even deserve.

Some of the well-known films of Satyajit Ray include PatherPanchali, Apur Sansar, Aparajito, Charulata, Nayak, Mahanagar, Devi, Shatranj ke Khiladi, Sadgati, Aagantuk, Pratidwandi, Ganashatru, etc. Those interested in the history of the Indian freedom struggle must watch Ray’s GhareBahire. To understand the India of the 1960s and 1970s, one must watch Mahanagar, HeerakRajarDeshe, Aranyer Din Ratri, Pratidwandi, and Seemabadhh. By making Ganashatru in 1989, Ray had already pointed out the lack of intellectual, ideological, and criticality of today’s India.

In an essay written in 1948, just a year after independence, Ray strongly advocated the depiction of ‘Indianness’ in cinema. He was disappointed with the then cinema being made in Bombay. He wanted to take Indian cinema to the world stage, and in this, he wanted the whole-hearted help from the Indian government. Away from glam and glitter, Ray, then 27, favoured a language that blends imagination, integrity and Indianness, citing films like DhartiKe Laal and Kalpana. He believed that the filmmakers would find the material to make such films in the Indian common life, its habits, dialects, clothing and methods. Ray was looking for ‘Indianness’ in Indian films, and just a glance at his films can give one an idea of how diligently he himself lived up to this aspiration and expectation.

Today, when Indian cinema is passing through a challenging phase, there is a need to take Ray’s films, books, ideas to the film lovers once again. The age-old culture of film clubs, film societies should be revived once again. Ray has given us a great lesson through his life that film is not just a technical medium, it is a weapon which a filmmaker can use to make his society democratic, cultured, and elite. Satyajit Ray had warned in 1948 itself that Cinema in the wrong hands would take the society on the wrong path. If we can create such a society through films, it will be a real tribute from us to Ray and many other filmmakers like him.

The author is working as an Assistant Professor in UPES, Dehradun. She has completed her Ph.D from the Centre for Historical Studies, JNU.