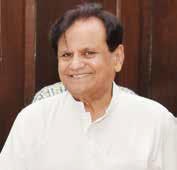 Shri Ahmed Patel Leaves for his Heavenly Abode The Congress Working Committee expresses its profound shock and grief at the untimely demise of Shri Ahmed Patel, a long-serving MP and the Treasurer of the Congress Party.

CWC Condolence Message: For nearly four decades, Shri Patel was an integral part of the organization, contributing in manifold ways as Youth Congress worker, Gujarat PCC President, AICC member, CWC member, Political Secretary to the Congress President and Treasurer. In each of the responsibilities that he assumed, he brought to bear a great sense of dedication, commitment and purpose, always keeping the interests of the Party paramount. Such was his selfless service to the Party that he won thousands of friends, admirers and supporters not only within the Party but across the political spectrum.

Shri Patel’s signal contribution was his unique capacity to reconcile competing aspirations and forge unity and comradeship among the leaders and members of the Party. He carried this remarkable talent to reconciling the competing aspirations of other political parties as well and to forging coalitions at the Centre and in the States. He was a pillar of strength to the two coalition governments that were led by the Congress during 2004-2014.

At every step of its journey in guiding the Congress Party, the CWC will go forward with a sense of duty and discipline. That is the only way that Shri Patel, or Ahmedbhai, would have wanted us to conduct our affairs. On behalf of the lakhs and lakhs of Congress workers, the CWC salutes the life-long service of Shri Ahmed Patel and offers its profound and sincere condolences to his family.

NEW DELHI: Senior Congress leader Ahmed Patel died at a Gurgaon hospital on 25th November, 2020. He was 71. The veteran politician had been at Medanta Hospital since his health worsened after a Covid infection. In a tweet at around 4 AM his son, Faisal Patel, said that the Rajya Sabha MP from Gujarat died at 3.30 am.

“With profound grief & sorrow, I regret to announce the sad and untimely demise of my father, Mr. Ahmed Patel at 25/11/2020, 03:30 AM. After testing positive for COVID-19 around a month back. His health worsened further due to multiple organ failures. May Allah grant him Jannatulfirdaus, inshallah”, said his son Faisal.

He also urged all well-wishers to adhere to the COVID-19 regulations by avoiding mass gatherings.

The veteran Congress leader had himself announced on Twitter on October 1 that he had tested positive for the novel coronavirus and all those who had come in close contact of him should also get tested.

A staunch loyalist of Nehru-Gandhi family, Ahmed Patel was the go-to man in the Congress who kept a low profile but quietly wielded power and meticulously executed decisions of the leadership.

He served as an effective link between the party and government during the two terms of the United Progressive Alliance (UPA) between 2004 and 2014. As political secretary to Congress President Smt. Sonia Gandhi, he had access to leadership that no other leader in the party had and worked the channels to work out various issues.

He shot to limelight when he won Lok Sabha polls from Baruch in Gujarat in 1977 during the Janata Party wave and was made the Gujarat Youth Congress chief. The 71-year old leader was a three-time member of Lok Sabha and was into his fifth term in the Rajya Sabha.

He served as Political Secretary to Congress President Sonia Gandhi for 16 years and rose in stature with time. His rapport with party leaders across generations came in handy in the role as he efficiently executed decisions while acting as a bridge between the top leadership and party functionaries at various levels. He was the trouble-shooter of the Congress and had steered the party out of difficult situations many a times.

He was appointed party treasurer in August 2018 ahead of the Lok Sabha elections. The appointment came when Rahul Gandhi was the party president showing his resourcefulness and indispensability to the party.

After the Congress-led UPA came to power in 2004, Patel refused to join the Cabinet and instead preferred to work in the organisation.

Accessible, polite and tactful, Patel was a link between the gen-next of the party and senior leadership. Suave but understated in his style, Patel also had a good rapport with the media.

A long-serving member of the Congress Working Committee, he was among those who contested and won elections to the party’s highest decision-making body. Patel had earlier also served as the treasurer of the party when Congress was out of power from 1996-2000. He had also been involved with the work of Rajiv Gandhi Foundation.

Sonia Gandhi in her condolence message said that in Patel’s death, “I have lost a colleague, whose entire life was dedicated to the Congress Party.”

“His faithfulness and dedication, his commitment to his duty, his always being there to help, his generosity were rare qualities that distinguished him from others.

I have lost an irreplaceable comrade, a faithful colleague and a friend. I mourn his passing and I feel deeply for his bereaved family to whom I offer my sincere feelings of empathy and support,” she said.

Dr. Manmohan Singh’s letter to Smt. Memoona Ahmed: I was deeply shocked and saddened by the untimely demise of your beloved husband Shri Ahmed Patel. Shri Ahmed Patel served the Congress Party as its treasurer for a long time and his popularity among the masses is evident from the fact that he got elected as Member of Lok Sabha for three times and also got elected for five times to the Rajya Sabha. With his hard work, Shri Patel who started his political career by contesting local body elections in the Bharuch District of Gujarat had grown to become an undisputed leader in the Congress Party. His knowledge of the affairs of the Congress Party was unmatched. In his death, the Congress Party and our country has lost a very good Leader who always thought for the betterment of the poor and downtrodden people of the Society.

My wife joins me to convey to you and other members of your family our heartfelt condolences on this bereavement. We pray to the Almighty to give all of you the strength to bear this great loss with courage and fortitude.

On Twitter Shri Rahul Gandhi said: “It is a sad day. Shri Ahmed Patel was a pillar of the Congress party. He lived and breathed Congress and stood with the party through its most difficult times. He was a tremendous asset. We will miss him. My love and condolences to Faisal, Mumtaz and the family”. Rahul Gandhi’s letter to Faisal: I am saddened by the passing of your father, Shri Ahmed Patel Ji. We have lost a leader who dedicated his life to the Congress party.

Ahmed Ji epitomized courage and loyalty in public life. He stood by the Congress party through its most difficult times. I will miss his wisdom, his intellect and his unwavering commitment to the Congress party. He will continue to guide us and inspire every Congress worker to carry forward our mission.

My thoughts, prayers and love are with you and your family in this difficult time.

Priyanka Gandhi Vadra on twitter: Ahmed ji was not only a wise and experienced colleague to whom I constantly turned for advice and counsel, he was a friend who stood by us all, steadfast, loyal, and dependable to the end. His passing away leaves an immense void. May his soul rest in peace!

On behalf of the Congress Party Shri KC VENUGOPAL, General Secretary, Organisation Congressmen & women across the country are deeply pained & shocked by the passing away of Senior Leader, Shri Ahmed Patel and have joined to express heartfelt condolences.

Shri Ahmed Patel’s affable nature, mild manners, dedication to Congress ideology and principles and indelible faith in the leadership in face of every adversity, endeared him to all. His capacity to reach across and make friends made him stand apart.

We deeply mourn his loss and pray to the almighty to give strength to the family, his loved ones and his supporters to bear the loss.

As a mark of respect to Shri Ahmed Patelji, the Congress party flag will fly at half-mast for the next three days.