The Worthy Successor of Jawaharlal Nehru 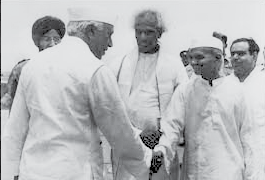 The Worthy Successor of Jawaharlal Nehru

Lal Bahadur Shastri, the successor of Pt. Jawaharlal Nehru, is most remembered for coining the slogan ‘Jai Jawan, Jai Kisan’ and for his admirable leadership during the India- Pakistan War of 1965. Though many historians, like Ramchandra Guha, and military historians consider the 1965 war a draw, the fact remains that Pakistan failed in its primary objective of annexing Kashmir by force. For this historic achievement the credit must go to India’s second Prime Minister as also his trusted colleague Y.B. Chavan playing a crucial role as the country’s Defence Minister.

However, the military victory could not have been possible without the sacrifice and gallantry of officers and men of the Armed Forces ably led by Gen. J. N. Chaudhuri, Air Marshal Arjan Singh and Admiral B.S. Soman, the Chiefs of Army, Air Force and Navy respectively. Y.B. Chavan, the dynamic Defence Minister presided over the complete coordination of the three services and had, after 1962, overseen the battle worthiness of the forces by ensuring that there was no shortage of arms, ammunition and manpower.

It was unfortunate that Shastriji died a few hours after signing the Tashkent agreement with President Ayub Khan of Pakistan 53 years ago, on January 11, 1966. However, contrary to conspiracy theories, it was a natural death. This was corroborated by at least two eminent journalists, Inder Malhotra and Kuldip Nayar, who accompanied the late Prime Minister to what is now the capital of Uzbekistan. All senior Congress leaders including Morarji Desai and Kamaraj ruled out and ridiculed conspiracy theories.

As the nation observes the 55th death anniversary of this embodiment of integrity, simplicity and humility, it may be appropriate to recall some of his other virtues and deeds which are unknown to the present generations.

Born in a poor family, the young Lal Bahadur learnt simplicity and humility as a school student who many a times had no money to even pay his modest school fee. But as he grew up, he became a voracious reader who would read anything he came across. He found a verse of Guru Nanak extremely inspiring and adopted it as his life mantra. The verse reads: “Nanak Nanhehairaho, JaiseNanhee doob, Aurrookhsookhjayenge, doob khoobkeekhoob” (“O, Nanak, remain a small one, as small as grass; Other plants will wither away, but grass will remain ever green.”)

Mahatma Gandhi and Jawaharlal Nehru were the greatest influence on the political career of Shastriji, spanning 45 years (he courted arrest in the Non-Cooperation Movement in 1921). Of this he says: “From the very beginning Panditji was exceedingly good and kind to me. What I like most about him was that he never involved himself in power politics – I learnt from him and Gandhiji that one should not run after power or office but work quietly and with detachment without expecting reward.”

Though Pt. Nehru was Lal Bahadur’s hero, his political guru was Purushottam Das Tandon who got elected as Congress President in 1950 against the Prime Minister’s wishes. However, soon after, sensing the mood of the Congress Working Committee (CWC), Tandon resigned saying he had decided to step down as ‘Nehru was the symbol of the nation.’ Lal Bahadur who was the Police (Home) Minister in U.P. played a major role in resolving the deadlock.

It speaks volumes of Jawaharlal Nehru’s magnanimity that when he took over as Congress President from Tandon, he asked Lal Bahadur, then considered a staunch Tandon loyalist, to come to Delhi to take over as General Secretary of the AICC. This was the turning point in Shastri’s political graph which rose and rose culminating in his becoming the Prime Minister in 1964 following Pt. Nehru’s death.

That K. Kamaraj, the then Congress President, after ascertaining the wishes of senior party leaders, Chief Ministers, CWC members and MPs, declared Shastri elected by consensus, was mainly due to the fact that he was seen by most as a person whom Nehru trusted the most. The Congress rank and file had seen how in the three general elections from 1952 to 1962, Nehru had entrusted the work of the organization and selection of Lok Sabha candidates to the low-profile Lal Bahadur. When senior party leaders, including Morarji Desai, S.K. Patil, Jagjivan Ram and Lal Bahadur himself resigned under the Kamaraj Plan, Shastri was the only Minister who was recalled to Nehru’s cabinet as Minister without Portfolio, soon after the Prime Minister’s illness in January 1963. This reinforced the opinion of an overwhelming majority in the Congress that Nehru had indicated the choice of successor. However, on more than one occasion, Nehru had refused to name his successor and categorically declared that the democratic process would decide who succeeded him.

Shastri’s speeches as Prime Minister bear testimony to the fact that the successor always swore by his predecessor. In his first broadcast to the nation (11 June 1964), Shastri said: “The towering personality who was in our midst…is no longer…though Jawaharlalji has passed from our sight, his work and his inspiration live on…we must now brace ourselves to the new tasks ahead, and face up to the situation whose very prospect we once used to dread – the situation of an India without Jawaharlal… Political democracy and the way it has functioned in our country is surely a great achievement. Here again we owe an immeasurable debt to Jawaharlalji for the deep attachment to democracy as a form of government and as a way of life.”

The Prime Minister concluded his address thus: “With him (Nehru) has ended the great age which Gandhiji began and Jawaharlalji consolidated. We have to build on the firm foundations they have left behind. Let us then bend ourselves to the great task before us – an India free, prosperous and strong and a world at peace and without war – these would be the most fitting memorials to Gandhiji and Jawaharlal.”

In his refusal to mix matters of state with matters of faith, Shastri, according to Ramchandra Guha, was indeed like Nehru. Writes Guha in his magnum opus, ‘India After Gandhi’: “Days after the ceasefire, with patriotic feelings riding high, he (Shastri) spoke at a public meeting at the Ramlila grounds in Delhi. Here he took issue with a BBC report that claimed that ‘Since India’s Prime Minister Lal Bahadur Shastri is a Hindu, he is ready for a war with Pakistan.’

Shastriji said that while he was a Hindu, Mir Mushtaq who was presiding over the meeting was a Muslim, Frank Anthony who had addressed it was a Christian. “…the unique thing about our country is that we have Hindus, Muslims, Christians, Sikhs, Parsis. We have temples and mosques, gurudwaras and churches. But we did not bring this all into politics…we Indians have the freedom to follow whatever religion we may choose and worship in any way we please. So far as politics is concerned each of us is as much an Indian as the other.”

I wish those in power who ritually bow before Shastri’s statues and busts in Varanasi and Allahabad realize how much they have deviated from the ideals and secular path of this noble Son of India. The real tribute to Lal Bahadur Shastri will be to follow the ideals of Gandhi and Nehru and revere them the way Shastri, India’s second PM did.

(The writer is a former Secretary AICC and Editor, The Secular Saviour)