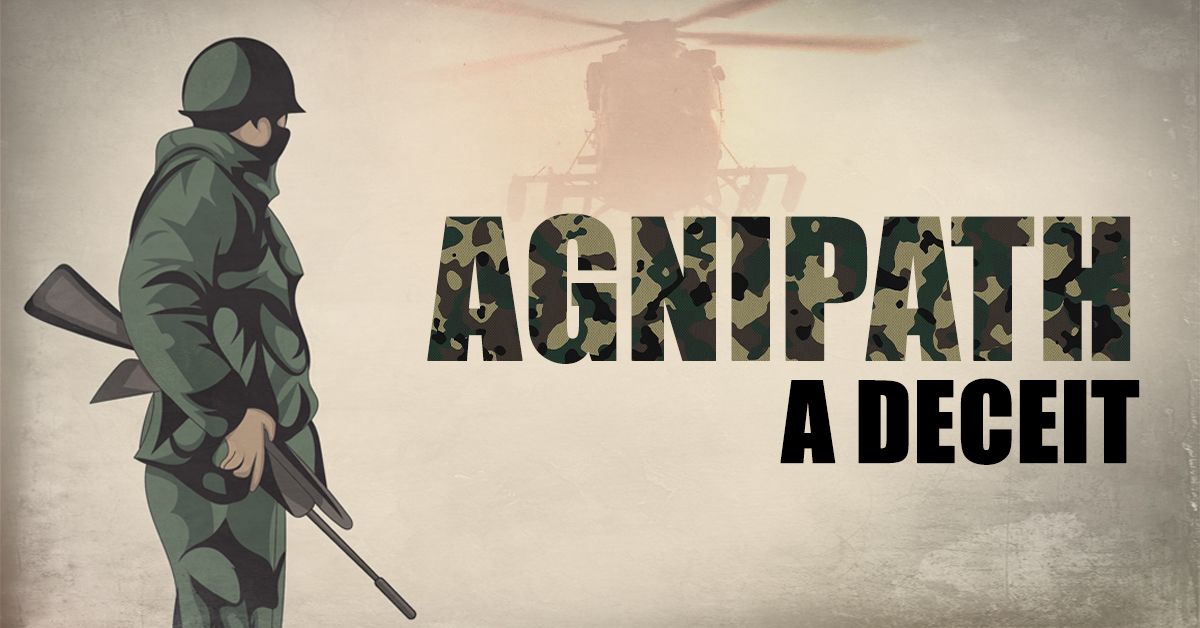 Last month, the Modi government yet again added another name to its above-mentioned list of disastrous failures and slammed the country with an inadequate, undiscussed, and unthoughtful scheme with large-scale, long-term national implications, and pushed it into implementation without any discussion or consultation in Parliament - The Agnipath. The top court has now transferred three petitions filed before it challenging the Centre’s Agnipath recruitment scheme to the Delhi High Court.

Despite catchy titles like ‘Agniveers’, the new recruitment plan was welcomed with backlashes, protests, and disapproval throughout the country - causing serious damage and unrest in some parts.

Agnipath is the new blunderous defence recruitment reform brought in by the BJP government and has been cleared by the Cabinet Committee on Security. Under this scheme, youth in the age bracket of 17.5 to 21 years of age are to be selected according to the existing selection system and employed as Agniveers on a four-year contract, starting with 31 weeks of basic military training. The ‘Agniveer’ will form a new military rank different from existing ranks and will be liable for deployment in any unit or regiment on military duties, like regular cadre soldiers.

Under the scheme, currently, 46,000 Agniveers are expected to be recruited this year, starting July 2022. At the end of four years, a maximum of 25% of Agniveers may be offered absorption into the Army. The age bracket has been revised after facing a huge backlash from the youth and it has been stretched to 23 years for this year.

How is Agnipath different from the old recruitment scheme?

A regular cadre soldier goes through a performance assessment at the unit/sub-unit level that concerns his selection for promotion to non-commissioned officer rank. Upon disqualification, he serves for 15 years and retires with gratuity, pension, lifetime medical cover and other benefits. For an Agniveer, performance assessment has been made mandatory at the end of four years and only twenty-five% of the Agniveers would qualify for absorption into the regular cadre.

India offered recruitment to the Army on a volunteer basis where the candidates offered themselves for employment and it was seen as a sign of valour and patriotism. Families in India have had traditions of joining the Army. It was seen as a dignified and proud career option for soldiers, as joining the armed forces was considered a lifetime of economic security through its post-retirement benefits and also a subject of valour.

The Agnipath recruitment policy changes this structure and perception entirely. Agnipath disparagingly stays confined to the four-year defined service term, after which 75% of soldiers would be sent back home without any benefits.

Agnipath poses a serious threat to our army and national security.

Training a combat soldier takes much longer than four years. A young recruit may learn to fight quickly but still end up as a casualty in an actual combat situation. The maximum casualties in war are always of recent recruits. With a clear and persistent threat on our northern border and a hostile neighbour in the west, India’s two-front danger is increasingly serious. An Agniveer trained for six months and with no experience in operations which involve personal risk, cannot acquire the professional competence level to inspire mutual trust and confidence. He will be insecure, unsure of his future, and hence, unmotivated to expose himself to the serious risks of military service.

The Agnipath scheme poses a more significant threat to the regimented structure of the Indian Army. It will not only end the long glorious tradition of each regiment that soldiers hold dear but there are legitimate concerns of Agnipath staining the army with communal and undesirable political agenda.

India is at that juncture where policymakers can no longer take unemployment for granted.

According to CMIE data, the unemployment rate in the country is as high as 7.4%. In 2017-18, the job generation stopped at a low of 0.03% per annum. The situation was further aggravated by the BJP government’s failed GST and Demonetisation plans. At the current time, 1/4th of the total number of approved posts in the Central government lay vacant.

Agnipath is indeed a sinister scheme paraded as a great employment programme. Even though the government has hastily made promises of ensuring 10% recruitment of Agniveers in the central armed police forces, defence production units and other installations, the fate of ex-servicemen and the condition of their employment in these sectors aren’t hidden from any. In the last 8 years, the government could hardly fill the 10 % posts reserved in Group C and 20% posts in Group D in Central government departments for ex-servicemen.

Agniveers returning after their four-year term would be akin to a trained militia.

The Agnipath scheme poses threat to Indian society as it can disperse violence and weaponry back into the social order. The Agnipath scheme is another of the BJP’s attacks on the foundations of India and a larger project to re-shape India and its institutions as per the RSS-BJP ideology. The fact that several thousand demobilised soldiers with arms training will join society every year would go some way in fulfilling Savarkar’s goal of militarising Indian society.

Sardar Vallabhbhai Patel - who forged the Indian State’s monopoly over violence was sure that the access to violence in society is unacceptable.

The Agnipath that has been introduced without any consensus or consultation cannot be cleared from the doubt of it being RSS’s new model of a militarized society. Moreover, what are the chances that the annual 75 % rejected Agniveers will not be employed by insurgents, terrorists, or communal organizations which possess huge financial resources and result in increased violence and repression in society?

Even if Agnipath has been introduced as a method of enormous saving in pensions and other lifelong benefits, on which a huge part of the defence budget is spent, the challenges and risks that come with it cannot be overlooked. Agnipath is indeed an anti-youth, anti-national, and anti-army scheme. Agnipath is a fire that can consume India. If not rolled back, it could prove malignant to the very foundations of this nation.

The Indian National Congress strictly and strongly opposes and demands the withdrawal of Agnipath. The risks it poses are far more serious than the benefits it provides (if any). For a safe, secure, and peaceful future for the country, the Congress party shall not step back until the scheme is rolled back. In this fight against Agnipath, Congress fights for India.