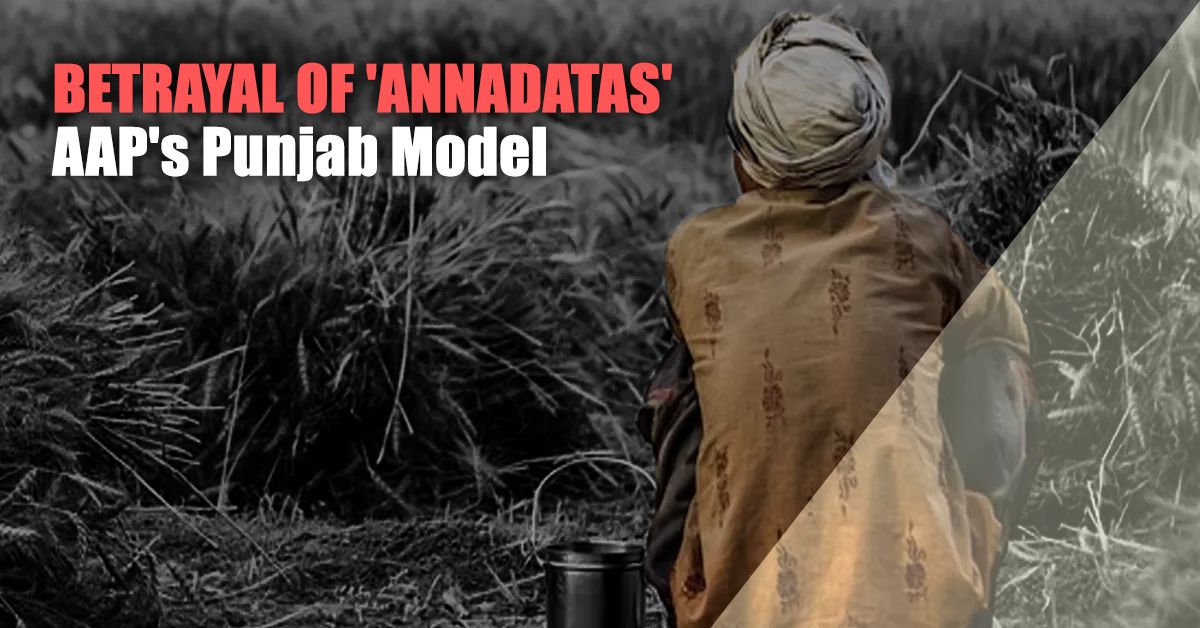 Aam Aadmi Party came to power in Punjab by promising respect and dignity to the farmers of Punjab - claiming that no farmer in Punjab would have to give up their life once they come to power. Less than 50 days since AAP formed govt in Punjab and 14 farmers have committed suicide in just April 2022. The state government along with the central government have made the farmers of Punjab miserable with their hanging policies and inept governance.

Many farmers' unions have criticised the AAP government in the state for not taking enough measures to ensure the safeguard and income of the farmers, and mismanaging the production yield and selling of the wheat crop. They have demanded Rs.1 crore as compensation for each family of farmers who died by suicide during the past three weeks. Along with that, the AAP government has also been asked to guarantee an end to farmer suicides and a make provision of Rs. 500 per quintal compensation for low yield as per surveys.

Farmers suicide is a catastrophic issue in the nation. Yet the central as well as the AAP government in Punjab have completely failed to address it. The previous Congress government waived off loans up to Rs 2 lakhs for thousands of farmers and landless labourers, amounting total to a sum of Rs 6000 crores. AAP leader Arvind Kejriwal, who had made the grand guarantee to the delegation of farmers in October 2021 as well as in the 2022 election manifesto that there would be no farmer suicides if AAP came to power, has failed to deliver, resulting in more than a dozen farmers being forced to commit suicide in a very short span of a month.

The suicide note recovered from farmer Manjit Singh - one of the deceased - states that he was taking the extreme step due to the low yield of wheat this season. AAP, which was well informed of the state of crop yield this season, did not bother to take any actions to combat the rising input costs and provided no change in the MSP. The low crop yield and shrivelled grains because of the early onset of heatwaves are an unfortunate tragedy for the farmers of the state. The low yield of the wheat crop doubled the sufferings of many farmers in the cotton belt whose crops were affected due to pink bollworm attack. All of this required a sound policy to protect and safeguard the farmers and their income.

Punjab - the biggest contributor to the central pool- is also facing a 15 year low in wheat procurement. Government agencies including the Food Corporation of India have only been able to buy 83.49 lakh tonnes of wheat for this rabi season as of Sunday evening. Experts fear that it might not reach the 100 lakh tonnes figure this time. It is the result of a sluggish attitude by the AAP government on one hand, while on the other hand, the Modi government has fixed Rs. 2015 per quintal MSP for wheat for this rabi season.The farmers have been left to the mercy of private players in absence of the government procurement.

False promises and atrocities on the Annadatas of the country have become a new trend for political parties such as AAP and BJP. They claim to ease the burden on the farmers and end up putting them in a state where suicide becomes the only way out. Our farmers are the providers of our nation. They make sure that the ones sitting in their lustrous houses always have food on their plates. It is the misfortune of the country and its people that our government and institutions are failing to provide measures for their protection and welfare. It is outrageous that our ‘Annadatas’ are being betrayed and killed. From the black farmer laws to low procurement - the list of enormities on our farmers is unending.