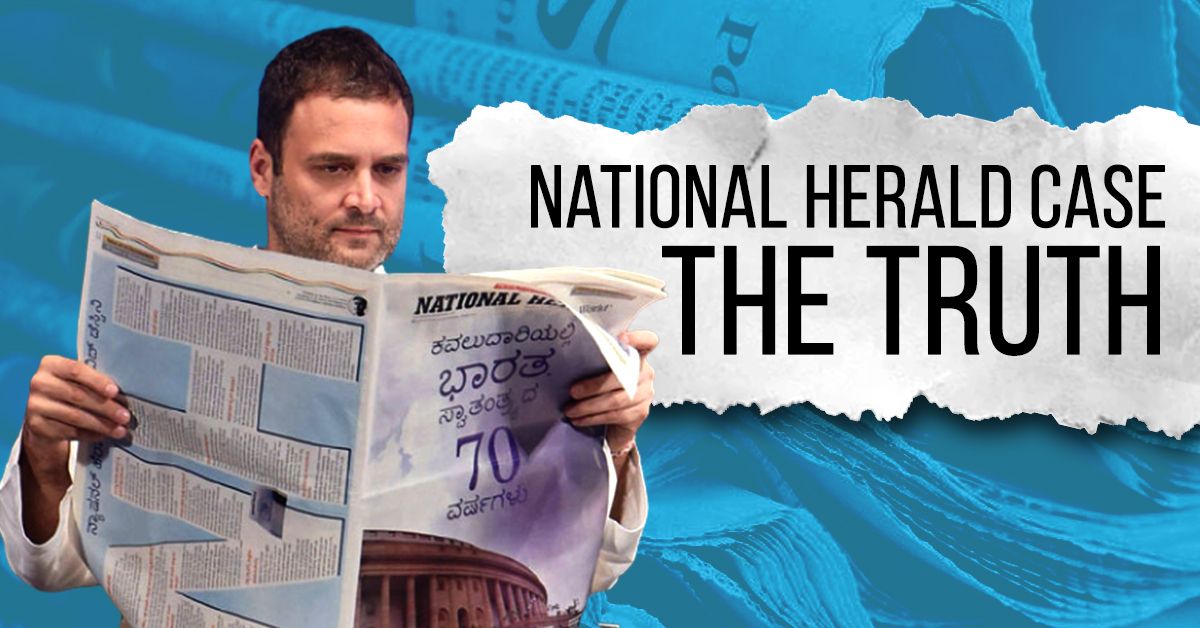 The year was 1937. The spirits were high and the aim was clear—freedom. India was yearning for freedom. To give voice to the freedom movement in the country, Pt. Jawaharlal Nehru, Sardar Patel, Purushottam Tandon, Acharya Narendra Dev, Rafi Ahmed Kidwai and other leaders in the struggle started the National Herald newspaper published by a company called Associated Journals Ltd. The newspaper gained popularity soon such that in a span of just 5 years, the British government felt so threatened that it banned its publication in 1942 during the ‘Quit-India’ Movement. An event that was described as “A Tragedy for the National Movement” by Mahatma Gandhi.

The British feared not the newspaper but the truth it carried and the spirit of the Congress party that stood for truth, justice and equality, and all the ideas that formed the foundation of an independent India. Today, after 75 years of freedom, those ideas are threatened again. This time, it is not an outsider that is threatening the idea of India but its own government—PM Modi’s government—yet, their reaction is the same as the British, who used their brute power to silence and crush the voices raised against their tyranny and misrule.

The ruling party's use of the central agencies for its own vendetta is a worrying and shameful reality of new India and its newest target is ‘National Herald’ and the Congress party—those who built the India they’re ruling today. The Enforcement Directorate acting on a fabricated and fake case summoned Congress President Smt. Sonia Gandhi and Shri Rahul Gandhi for questioning related to money laundering. This case with no standing or evidence is just another attempt by the BJP government to attack the voices that question their failures and speak out against their despotism.

What is the National Herald case?

Despite the editorial excellence of the paper, National Herald continued to face trouble sustaining itself financially and ran into losses with outstanding dues of Rs. 90 crores. To help the newspaper get through the crisis, Indian National Congress loaned Rs. 90 crores to it in the years between 2002 to 2011 in about 100 installments. Out of the whole amount loaned, National Herald used Rs. 67 crores to pay salary and VRS of its employees. The rest of the money was used for payment of dues related to electricity, tenancy, building expenditure etc. This loan was duly disclosed in books of accounts of the Congress Party, duly audited and submitted to the Election Commission of India.

Since National Herald and the AJL were deemed unable to repay the loan later, the loan was converted into equity shares of Associated Journals Ltd. As Indian National Congress can not own equity shares, the equity was allotted to ‘Young Indian’, a Section-25 ‘Not-For-Profit’ company. Now, the point to note here is that Shareholders/Managing Committee members of a ‘Not-For-Profit’ company are prohibited by law from getting any dividend, profit, salary or any other financial benefit. Therefore, the question of any gain or profit or financial benefit to either Smt. Sonia Gandhi, Shri Rahul Gandhi or any other person in ‘Young Indian’ is completely out of the line and thus, it makes any claim of illegal gain or profit or financial benefit inherently false.

The National Herald is a legacy for our nation. It is no crime to protect a national legacy. Also, the grant of a loan by a political party is not a criminal offence under any law in India. How can the Congress Party granting loans to Associated Journals Limited (a company closely associated with the Congress Party since 1937 and espousing the ideology of Congress) be called a criminal offence?

Even the Election Commission in its letter to Subramanian Swamy in November 2012 clarified that there is no provision in the Representation of the People Act that prohibits or controls expenditure by a political party. The facts of this case make it clear that this is no case of money laundering but a callous maneuver by the BJP to weaken and threaten the Congress and the ideology it carries with it. Like the British felt intimidated by the truth and resorted to muzzling the voice of Congress in 1942, the BJP is also intimidated because the voices it is trying to suppress are unafraid voices that speak for the whole country and fight for justice and equality for all.

We won’t be cowed; we won’t stay silent. As they keep attacking our efforts to save India and safeguard the people’s rights, we will keep emerging stronger. It is a battle for truth and truth always prevails.