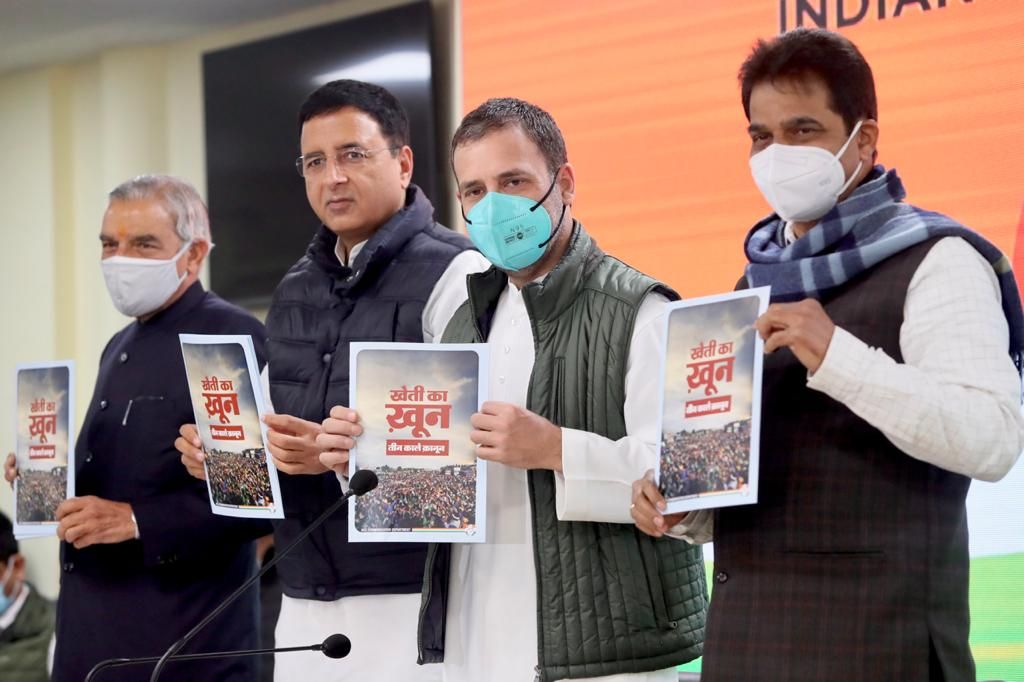 Tens of thousands of farmers have been protesting against the three black agricultural laws imposed upon them by the BJP government. They have been camping out on the outskirts of Delhi for nearly two months, in the bitter cold, without any respite from the Centre. With at least ten rounds of talks between the government and farmers' groups, the government has failed to listen to the farmers plight and resolve the deadlock.

Thousands of farmers along with the Indian National Congress Party have stuck to their main demand for the repealing of the new laws, while the government has refused to do so. To further empower the farmers and highlight their voice, Congress leader Shri Rahul Gandhi held a press conference yesterday. Speaking up against these three black laws since the beginning, the Congress MP told the press that the Central government's new farm laws have been designed to 'destroy' Indian agriculture. Rahul Gandhi also released a booklet titled ‘Kheti ka khoon, Teen Kalle Kanoon’ highlighting the plight of the farmers under the Modi government.'

Shri Rahul Gandhi said, “There is a tragedy unfolding in our country today. Government wants to ignore this tragedy. It wants to misinform people about this tragedy, but, the truth is that a huge tragedy is unfolding. I am not just talking about the farmers, because that is only a part of that tragedy. I would like to go into a little bit of detail about what is happening to our country and I think, it is important that youngsters, who believe in the future of this country, listen carefully to what I am saying, because this is not about the present, what is happening is about your future and this country’s ability to be economically strong, this country’s ability to give you a job, this country’s ability to stand tall among other nations.”

On the three new laws, the Congress leader added, “They are designed to destroy Indian agriculture. How have they designed to do it, by destroying the mandi, by destroying the Essential Commodities Act and by making sure that no Indian farmer can go to court to protect himself and to me, it is a tragedy that this entire country is just watching this ridiculous show. It is a tragedy because it shows me that the country itself is not able to understand the depth of what is happening. So, what is going to be the result of this-the result of this is going to be that 3 or 4 people are going to own India, 3 or 4 people are going to own the entire agricultural system. Farmers will not get the value they deserve. The mandi system will be destroyed. Three or four businessmen will be able to store millions and millions of tons of wheat, rice, other essential commodities and then my friends in the middle class – you will be paying prices, that you have never imagined.”

Stressing how the three laws will not only impact farmers but the middle class as well, Rahul Gandhi said, “Please, understand that the rice you buy, the wheat you buy, comes to you at the rate it comes because of the APMC, because of the agriculture system, because of the structure, so, this is not an assault on the farmers, this is an assault on the middle class and this is an assault on every single youngster in this country, who is not going to be able to get a job. So, this is what I want to tell the youngsters. Realize that your independence is being taken away. Realize that this happened before and we fought this and everything we have today, it is because of the fight that we fought and the same exact thing is happening to India today. This is the simplest way I can put it.”

Extending the support of the Party and himself, Rahul Gandhi said, “So, why are the farmers of Punjab and the farmers of Haryana standing there? Who are they? They are the patriots of this country, who are protecting the livelihood of 60% of this country. I 100% support them and I go further, every single Indian person should support them because they are fighting for us, they are not fighting for themselves. They are fighting to prevent this country from falling it to the hands of 2 or 3 people, that is the heart of what I wanted to say.”