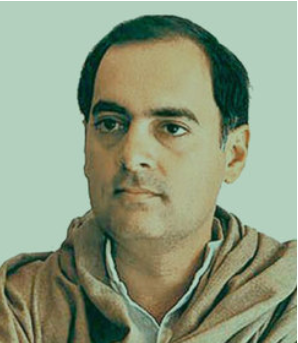 At 41, Rajiv Gandhi was the youngest Prime Minister of India and perhaps one of the youngest elected heads of Government in the world. His mother, Indira Gandhi, was eight years older when she first became Prime Minister in 1966. His illustrious grandfather, Jawaharlal Nehru, was 58 when he started his 17 year long innings as free India’s first Prime Minister.

At 41, Rajiv Gandhi was the youngest Prime Minister of India and perhaps one of the youngest elected heads of Government in the world. His mother, Indira Gandhi, was eight years older when she first became Prime Minister in 1966. His illustrious grandfather, Jawaharlal Nehru, was 58 when he started his 17 year long innings as free India’s first Prime Minister.

Besides being the harbinger of a generational change in the country, Mr. Gandhi received the biggest mandate in the nation’s history. In the elections to the Lok Sabha, which he ordered as soon as the mourning for his slain mother was over, the Congress party got a much higher proportion of the popular vote than in the preceding seven general elections and captured a record 401 seats out of 508.

Such an impressive start as the leader of 700 millions Indians would have been remarkable under any circumstance. What makes it even more so, indeed unique, is that Mr. Gandhi was a late and reluctant entrant into politics even though he belonged to an intensely political family that served India for generations, both during the freedom struggle and afterwards.

He was born on August 20, 1944, in Bombay. He was just three when India became independent and his grandfather became Prime Minister. His parents moved to New Delhi from Lucknow. His father, Feroze Gandhi, became an M.P. He earned a reputation as a fearless and hard working Parliamentarian.

Rajiv Gandhi spent his early childhood with his grandfather in the Teen Murti House, where Indira Gandhi served as the Prime Minister’s hostess. He briefly went to school at Welham Prep in Dehradun, but soon moved to the residential Doon School in the Himalayan foothills. There he made many lifelong friendships and was also joined by his younger brother, Sanjay.

After leaving school, Mr. Gandhi went to Trinity College, Cambridge, but shifted to the Imperial College, London, soon enough. He did a course in mechanical engineering. He really was not interested in “mugging for his exams”, as he was to say later.

By this time it was clear that politics did not interest him as a career. According to his classmates, his bookshelves were lined with volumes on science and engineering, not works on philosophy, politics or history. Music, however, has had a place of pride in his interests. He liked Western and Hindustani classical music as well as modern music. Other interests included photography and amateur radio.

His greatest passion, however, was always flying. No wonder then that on returning home from England, he quickly passed the entrance examination to the Delhi Flying Club, went on to obtain a commercial pilot’s licence and soon became a pilot in Indian Airlines, the domestic national carrier.

While studying at Trinity College, he met a young Italian student studying English at the Bell Educational Trust's language school in the city of Cambridge, named Edvige Antonia Albina Màino. He would later marry her in a Hindu Ceremony in New Delhi in 1968. Rajiv Gandhi and his wife, now known as Sonia Gandhi, stayed in Smt. Indira Gandhi’s residence in New Delhi with their two children, son Rahul and daughter Priyanka. Theirs was a very private life despite the surrounding din and bustle of political activity.

But Sanjay’s death in an air crash in 1980 changed all that. The pressure on Mr. Gandhi to enter politics to help his mother, then besieged by many internal and external challenges, grew. He resisted these pressures at first but later bowed to their logic. He won the by-election to Parliament, caused by his brother’s death, from Amethi in U.P. The Constituency returned to him by a whopping margin that too has become a national record.

For no one could have ascended to power—becoming both Prime Minister and Congress President—in more tragic and tormenting circumstances than Mr. Gandhi did in the wake of Indira Gandhi’s brutal assassination on 31 October, 1984. But he wore the awesome burden of personal grief and national responsibility with remarkable poise, dignity and restraint.

Congress lost the 1989 elections and Mr. Gandhi became the leader of the opposition. The National Front collapsed in early 1991 and elections were announced in May, 1991. He died in a tragic bomb blast on 21st May, 1991 at Sriperumbudur in Tamil Nadu.

A modern-minded, decisive but undemonstrative man, Mr. Gandhi was at home in the world of high technology. And, as he had repeatedly said, one of his main objectives, besides preserving India’s unity, was to propel it into the twenty-first century.